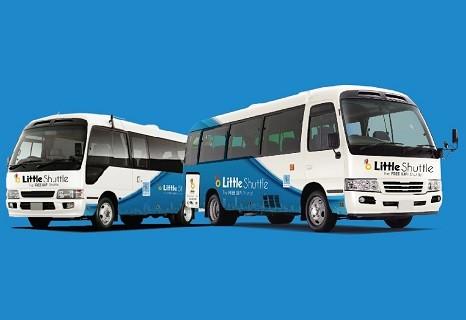 The Little Shuttle. Little is venturing into the bus services in Kenya just months after the government announced the rollout of the Bus Rapid Transport system and controversially ordering buses from South Africa. [Photo/ Little]

For the whole of February, chances are that as a public service commuter you will experience Little’s offering of free rides.

The ride hailing app is venturing into the bus services in Kenya just months after the government announced the rollout of the Bus Rapid Transport system and controversially ordering buses from South Africa.

In a message to users, Little Chief Executive, Kamal Budhabhatti, said that 2019 is full of possibilities.

“At Little, we are super excited at the way things are folding up. We are working hard to ensure that we provide you with the best Technology products in the sharing economy.”

Budhabhatti has hailed the milestone saying, “We started with hailing cabs, then we added Boda Boda. Both these offerings have been successful. Today Little serves not just riders in Kenyan cities, but also serve Uganda, Zambia and before the end of February, we should be in Tanzania.”

Heralding a new service in the public transport in Kenya, Budhabhatti said that commuters will now be able to ride in clean shuttles serving three major routes in Nairobi.

“I am glad to inform you that we have now launched Little Shuttle. At the press of a button, you can book a Shuttle. A Shuttle that is clean and safe, a Shuttle without hassle, exactly how an ideal mass transport should be.”

He added, “However, we are honest to let you know that this is a new service, and we are also perfecting our game, and I request your feedback to customize this product to suite Kenyans, After all we Kenyans are unique!”

The three routes have been christened Apple Route from Kahawa Sukari To Westlands and back, Avacado Route from Bomas to Upperhill and CBD and back and lastly the Lemon Route from Kinoo to South B and back.

“Currently the frequency of these shuttles is every two hours, starting from 0645am on week days. However, with time, we would be adding more shuttles on these routes, as well open over 10 new routes,” says Budhabhatti.

He said that on Sundays, Little will have routes that will take people to their churches and back.

Budhabhatti says that in February, “you can hop in and out of any Little Shuttle completely free throughout February.”

In July last year, Little was on the charm offensive to appease users as plans to increase charges were announced.

Little said it was increasing fares from Sh30 to Sh35 in Nairobi.

“After a deep thought, we’re rolling out a minor increase adjustment to our fares at Little in Nairobi starting today. I know this is not the best of the news for you. But, I would like to share some of my sentiments and the rationale behind this decision,” stated Budhabhatti.

The shuttles have free WiFi, Live tracking and a safety feature.

The launch comes just weeks after Egyptian bus-hailing company Swvl embarked on a pilot test of running services in Nairobi.

This even as Nairobi prepares for major tech disruptions as well as government-led streamlining.

Swvl has started marketing on social media asking users to pilot test their rides in two routes of Thika route as well as Langata road, which incidentally are prone to major traffic snarl-ups.

Kenya’s public transport system is chaotic despite raking in billions in revenues. The sector is the country’s top employer for unskilled youth and is riddled with disorderliness and crime.

Nairobi is estimated to have about 30,000 matatus that get into Central Business District (CBD) daily.

The disruptors face an uphill task in the sector where order and civility are alien.

With an average capacity of 25 passengers each, matatus move about 750,000 Nairobians in and out of CBD during rush hour.