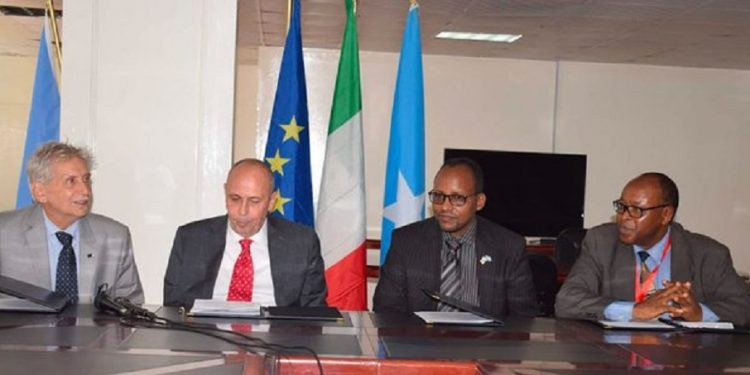 The Somalia infrastructure and corridors have received a boost after the Italian government signed an agreement for an additional €1 million. The contribution was made to the Multi-Partner Somalia Infrastructure Fund. [Photo/AfDB]

by Njenga Hakeenah
in Infrastructure, Somalia
0
Share on FacebookShare on LinkedIn

The Italian Government has signed an agreement for an additional €1 million contribution to the Multi-Partner Somalia Infrastructure Fund.

Established by the African Development Bank (AfDB) in October 2016, the Fund is one of the financing windows under the Somalia Development and Reconstruction Facility of the New Deal Compact for Somalia.

It aims to support and accelerate Somalia’s inclusive and sustainable economic recovery, peace and state building through rehabilitation and development of the country’s infrastructure.

This will be Italy’s third injection of funds to the Bank-managed Fund, bringing its total contribution to date to €3.5 million.

This latest contribution will be used to co-finance the Somalia Regional Corridors Infrastructure Programme (SRCIP) with the support of the European Union (EU), AfDB and other partners.

After successfully holding a peaceful presidential election in 2017, Somalia proved that the Horn of Africa country was heading in the right direction.

Among those who hailed the process was Kenya’s President Uhuru Kenyatta who said that the election gave renewed hope to the Somali people and the international community.

“The way the election was conducted and the subsequent peaceful transfer of power has made us very proud,” Kenyatta said.

For this renewed hope, the Norwegian Investment Fund for Developing Countries (Norfund) established a USD 10 million fund for supporting small and medium-sized companies in Somalia.

This was done together with Shuraako, a programme of One Earth Future and the Danish development finance institution, IFU.

The primary investment instrument was the Sharia-compliant “Murabaha” with the average deal size being USD 250 000.

Investments are made into companies in various sectors including but not limited to fisheries, agriculture, light manufacturing, hospitality and energy.

In October last year, Somalia hosted one unique event signalling the country’s investment in its human resources to advance wealth and economy.

Somalia’s first and largest ICT exhibition opened in Somalia’s capital, Mogadishu, showcased the development Somalia is making in the field of communications and technology.

The ICT Expo Somalia is expected to become a key event and essential part of the country’s ICT sector with the technical support of the National Communications Authority and Ministry of Post, Telecommunications and Technology and sponsored by Benadir Regional Administration.

The signing of the agreement on March 14, 2019, was witnessed by senior AfDB staff from the Eastern Africa Regional office and representatives of the governments of Italy and Somalia in Mogadishu.

The ceremony followed the conclusion of an SRCIP appraisal mission to Somalia during which about 30 representatives of the Federal Government of Somalia, Federal Member States, the Bank and the EU discussed the programme components, financing plans, implementation, procurement, financial and disbursement arrangements.

“The Somalia Regional Corridors Infrastructure Programme is of great importance to the country as it will not only enhance inter-State connectivity but will also create jobs and hopefully slow down the recruitment of youth by militant groups,” Hoosow said.

Also speaking during the event, Carlo Campanile, the Italian ambassador to Somalia said infrastructure development is an important enabler of economic growth as it attracts investments and creates job opportunities.

Guglielmo Giordano, Head of the Italian Agency for Development Cooperation in Somalia said that the presence of Federal Member States officials demonstrates Somalia’s desire to “unite towards infrastructure development.”

The Multi-Partner Somalia Infrastructure Fund has so far received support from the Bank, the government of Italy, the EU, Islamic Development Bank and the United Kingdom’s Department for International Development (DFID).

You can also read why Ethiopia, Somalia are in IRC’s 2019 humanitarian crisis list,  why their re-emergence leaves Kenya startled and these golden opportunities at bridge connecting 8 African countries.

International water day: Access to water for all in Tanzania