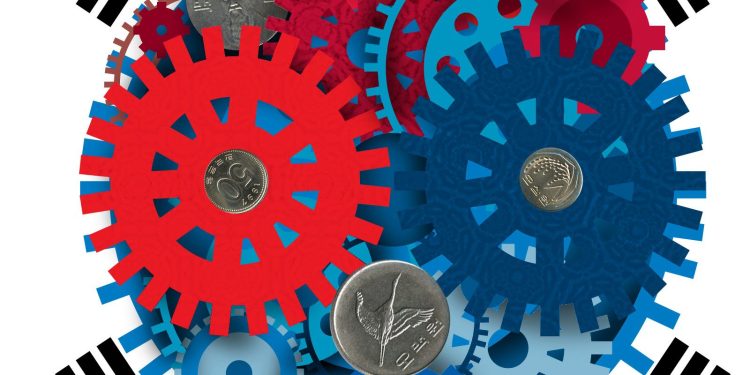 African countries are grappling with unsustainable levels of sovereign debt. The situation is set to get worse before it gets better. The continent has countries that have great promise in terms of economic potential but are need of guidance and South Korea is a prime example and benchmark of how with the right kind of management of the economy a country can repay its external creditors and do so in record time. Southy Korea repaid its debt of US$ 59 billion in 4 years.

South Korea or the Republic of Korea has achieved what the World Bank describes as remarkable success in combining rapid economic growth with significant poverty reduction.

That country’s government’s policies resulted in real gross domestic product growth between 1988 to 2019 of 5.45% on average. This superlative economic growth feat was fueled by growing exports in pursuit of an export-driven growth strategy. In the 31 years from 1988 to 2019, Korea was able to grow its exports on average by 9.27% annually. Additionally, Korea’s gross national income (GNI) per capita increased rapidly from US$67 in the early 1950s to US$33,790 in 2019.

The country used to be a recipient of aid but through the growth of its economy, it has become a member of the Development Assistance Committee of the Organization for Economic Cooperation and Development (OECD) in 2009.

South Korea’s economic development from its formative years as an agriculture-driven state and economy to the advanced modern technology-driven economy that it is today went through phases.

According to Oxford Research, at its independence in 1948, South Korea was impoverished and its economy was based on agriculture. Ironically most of the electricity and industrial capability was in its northern neighbour who South Korea has since eclipsed in terms of economic and social development.

During the years 1950 to 1953, Korea was at war from which it recovered very slowly. The country then experienced 35 years of rapid economic expansion from 1961 to 1996. This period transformed the fledgling agrarian country into a prosperous industrial nation. Economic growth rates characterized these 35 years of rapid economic development ranked among the world’s highest.

The change in South Korea’s economic fortunes began under the military leadership of Park Chung Hee, who came to power in 1961 and immediately prioritised economic development. It needs to be kept in mind that South Korea has no notable natural resources, unlike countries in Africa that it could exploit to develop its country. Park’s government focused on a combination of state planning and private entrepreneurship. The country then focused on the resources that it had, human capital.

South Korean industry began with the production of textiles and footwear and then moved into heavy industries like steel, heavy equipment, ships, petrochemicals, electronics, and automobiles by the 1980s.

Africa needs to follow the economic lead of countries like South Korea that developed into advanced states through export-led economic growth and the development of strong domestic economies. South Korea committed to rapid industrialization. This is what caused the economy to take off. However, it is important to note that economic development was also set in motion by leaders who implemented land reform and educational development.

Oxford Research notes, “Industrialization was characterized by a close pattern of cooperation between the state and large family-owned conglomerates known as chaebǒls. This close relationship continued after the transition to democracy in the late 1980s and 1990s but after 1987, labour emerged as a major political force, and rising wages gave further impetus to the development of the more capital-intensive industry.”

An interesting note in the economic development of South Korea is the relationship that the government had with private enterprises. The government viewed and still views businesses as partners in the country’s economic development. This is in stark contrast with Africa where governments tend to view business with suspicion. The suspicion in other instances is mutual. In other cases, still, there is not even suspicion but open hostility towards business.

This is most unfortunate and African countries need to rethink their stance towards the business community if meaningfully economic development is to take centre stage. In South Africa, some businesses are racially caricatured as “white monopoly capital” by radical politicians. That is the extent of the hostility towards business.

In Zimbabwe, the situation is much worse. Businesses are not free to express their reservations against retrogressive government policies for fear of victimization, which has occurred brazenly in times past.

By 1996, South Korea joined the Organization for Economic Cooperation and Development and was recognized as a developed stated. All this took less than a generation. Of South Korea’s economic development Oxford Research says, “Although living standards still lagged behind those of North America, Western Europe, and Japan, the gap was significantly narrowed. After 1996, its economic development slowed but was still high enough to achieve a per capita income comparable to the countries of Western Europe and to shift from a borrower of to an innovator in technology.” One of the extraordinary points which easily gets lost in history is the importance of leadership in the rapid development of South Korea’s economy. General Park provided very able leadership and direction after overthrowing the Rhee administration in 1961.

General Park it must be said did not have a definitive economic blueprint to turn around Korea’s fortunes, but he had a strong and unflinching desire to end South Korea’s poverty.

Africa is not short of strong leaders. Some of the continent’s leaders are borderline authoritarian but are strong leaders, nonetheless. Paul Kagame comes to mind almost immediately. The late John Magufuli, though radical and at times extreme was also a strong leader. The list goes on. Africa is not short on leadership. What the continent needs especially at this critical juncture where most of the countries are in debt at levels that the IMF considers to be far beyond what is appropriate. On average African countries have debt to GDP ratios of over 100% and consequently the same countries are having to expend an unsustainable chunk of their revenues on servicing these loans. It some of the most unfortunate cases the countries have most of their debt stock in hard currency which is appreciating in value relative to their own currencies making loan repayments even more expensive.

In South Korea, according to Oxford Research, “Several steps were taken to direct the state toward economic growth: the development of five-year economic plans, the redirection of the economy from import substitution to exported-oriented industrial development, and state control over credit. The Park regime created an Economic Planning Board (EPB) staffed by technocrats to direct economic growth. The EPB head served as a deputy prime minister, outranking all other cabinet members. The state nationalized all commercial banks and reorganized the banking system to give control over credit… It then provided low-interest loans to businesses according to the needs of economic plans. Most historians regard the First Five-Year Development Plan to be the point of economic take-off.

Launched in 1962, it called for a 7.1 per cent economic growth rate for 1962–1966, by encouraging the development of light industries for export.” These initiatives culminated in an economy so strong and advanced that the country could pay a multibillion-dollar loan from the IMF, which totalled US$ 58 billion in 4 years!

Also read: Global recession and how investors should brace for it

Miners in Zimbabwe to pay mining royalties in commodities

Strategies for investing during a global recession