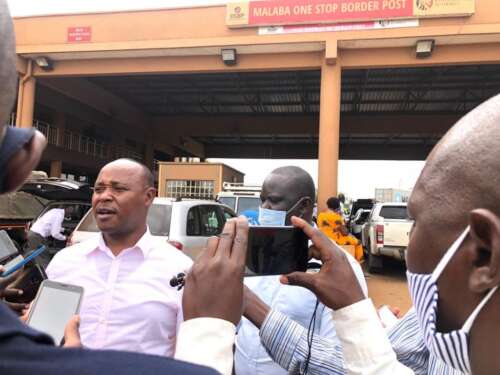 The East African Business Council (EABC) has called upon South Sudan to stop charging Visa entry fees on any East African Partner States and embrace the use of National Identity cards as a travelling document across the region.

“As it is now, South Sudan still charges visa fees to EAC citizens from EAC Partner States which do not have a bilateral agreement, with the country. We also urge South Sudan to join Kenya, Uganda and Rwanda to use National IDs as travel documents,” said EABC CEO, Dr. Peter Mutuku Mathuki.

This follows EABC’s visit at the Nimule – Elegu One-Stop Border Post (OSBP) yesterday. EABC in collaboration with the Private Sector Foundation Uganda (PSFU) and the South Sudan Chamber of Commerce held a meeting with the Joint Border Management Committee, deliberating on sustainable solutions on issues affecting the flow of goods and movement of persons at the border post.

Dr. Mathuki also noted that only the Ugandan side of the OSBP is operational, and called for the full operationalization of the Nimule-Elegu OSBP. This is set to expedite the movement of goods and people and reduce transport costs across national boundaries.

EABC is also calling for the removal of the $50 Covid-19 testing fees, which cross border traders say is increasing their cost of doing business.

Intra EAC trade is rebounding with Kenya’s exports to Uganda standing at $88 Million as in August 2020, a jump from $53.9 million in the same period last year. Uganda exports to Kenya stood at $46.9 million as of August 2020 a slight decline from $48.3 million recorded last year.  (Uganda Bureau of Statistics).

EABC also urged border officials to make information on the Simplified Trade Regime (STR) accessible to traders to enable them to benefit from the regional preferential treatment when importing or exporting goods within the region.

The Nimule-Elegu OSBP is the main border post between South Sudan and Uganda and the busiest land border in South Sudan where most goods imported from Uganda are processed. The OSBP has been recording an average of 160 trucks crossing the border daily.

Some of the major goods traded using the borders include; cereals, sugars and sugar confectionery, milling products, vegetable fats and oils, edible vegetables and beverages.

Speaking during the event, the traders also asked officials from the Ministry of East Africa Community in Uganda to engage the Ministry of Works and Transport, Uganda to come up with containment measures of the floods that continue to disrupt trade at the border.

Kenya keen on strengthening trade ties with the EU