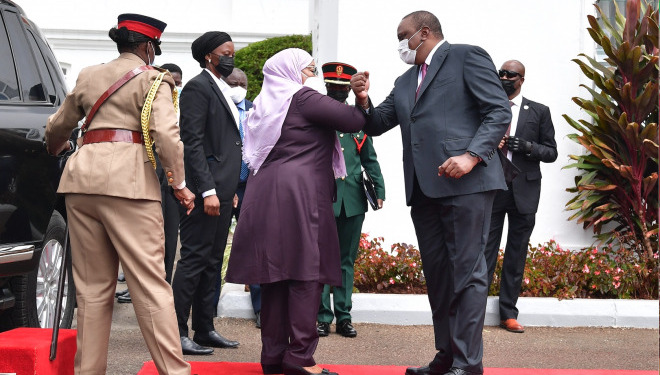 East Africa’s most close trade partners, Kenya and Tanzania have resuscitated their relationship, as President Samia Suluhu Hassan and Uhuru Kenyatta improve their relations by tying new deals to the table.

This new dawn comes as President Samia executes her strategic state visit in Kenya since the last visit made by her predecessor the late President John Magufuli in 2016.

According to information from The Citizen, the two neighboring countries agreed on fortifying trade and economic relations and “re-energize the joint commission on cooperation”.

The central bank of Tanzania (BoT) and Tanzania Revenue Authority (TRA) data show that Tanzania’s trade with Kenya registered a deficit of $35.8 million in 2018, which is less than a surplus of $90.2 million in 2017.

The two countries have been in trade wars for quite some time since 2018, which sparked outrage from business communities from both sides, hence—this new path taken by the countries brings a new hope towards the business and trade landscape.

During the business forum held at the Serena Hotel, Nairobi, President Kenyatta, directed the Agricultural minister to clear maize stranded at the borders in two weeks, which is a sign of executing what he and President Samia agreed.

Further, the two presidents saw an opportunity to commit towards cooperating in culture, social integration, and national heritage, but also fighting terrorism by strengthening security.

However, members of the business community saw seven crucial things to be addressed during President Samia visit to Kenya.

The Citizen publication noted that the business forum in Kenya pointed, restoring trust between the two countries, addressing non-tariff barriers (NTBs), harmonization of laws and regulations, and the need to improve government agencies’ services at the border points.

This gas pipeline deal is a start of other vital projects that, Kenya and Tanzania anticipate executing together, as the two Presidents affirmed their commitment towards building more interconnected infrastructures.

On Tuesday Kenya and Tanzania signed an agreement to begin working on a gas pipeline from Dar es Salaam to Mombasa, which is considered by the two countries a long-term project “to share energy resources”.

Tanzania which has already been endowed with 57 trillion cubic feet of natural gas reserves signed a memorandum of understanding with its counterpart in natural gas transportation.

According to information from The Citizen, President Kenyatta said, the energy project “should ease the cost of power to ensure that our industries can access cheaper energy that is also environmentally friendly,” while Tanzania’s President said that, “we have agreed on the need to ease the transportation of key energy resources and we have reached one such understanding on the transportation of gas. What we need to do now is start implementing the project.”

Further, President Samia noted that implementation was the key target after signing the agreement.

Tanzania is Kenya’s closest trading partner in the region with trade volume standing at around $407 million a year. There are almost 513 companies in Tanzania from Kenya with $1.7 billion worth of capital investment, bringing in 51,000 Tanzanians on the employment platform.

On the other hand, Tanzania has 30 companies in Kenya worth $172 million, employing more than 2000 Kenyans.