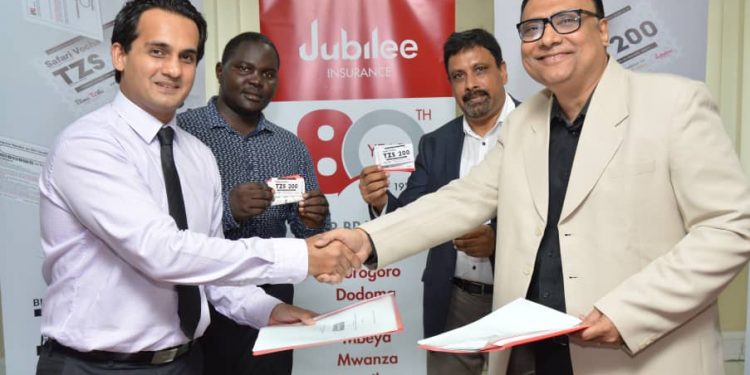 The product covers the unfortunate event of accidental death or permanent disability which may happen while travelling through any registered means of transport within the borders of Tanzania – air, road, train and sea. The insurance premium is Tshs.200 ($0.08) only for a cover of three days with a coverage of Tshs1,000,000 ($434).

According to its pioneers, it is the first insurance platform of its kind where insurance purchases will be made through scratch cards and mobile phone based technology. The platform is aimed at increasing the penetration of insurance services with hassle free purchases and claims service features. The first launched product, Safari Vocha, has three variants – three days, 180 days and 365 days coverage options and is unique in its appeal and value proposition.

The coverage can be effected with purchase of a scratch card voucher from any kiosk throughout Tanzania with the identifiable “Bima-Time”, “Bima-Vocha” posters and then tivation through mobile phone and policy documents received with tax invoices, EFD and receipt within 30 seconds via a link on the client`s phone. Anyone having a mobile network from Vodacom, Tigo, Halotel, Zantel or Airtel can buy this cover and the procedure is similar to recharging your mobile airtime.

The two insurance giants plan to launch at least five products on this platform this year and have at least 50 per cent of the population insured through the platform. The products include Medical Insurance, Life Insurance, Agriculture Insurance, Home Insurance and Bima-Toto Insurance which are expected to be launched this year, and Motor Insurance slated for next year.

Tanzania is the first country in which this platform has been introduced, but the companies plan on covering six other countries in the coming years. The vouchers will be available throughout the country and will ensure that people in the urban, semi-urban and rural areas are able to access the service. The claims can be lodged through USSD (*150*50*77#) and the submission and payment is made through mobile money which eliminates the requirement of a bank account for the beneficiary.

Insurance related activity in Tanzania is regulated by the Tanzania Insurance Regulatory Authority (TIRA) and comprises 30 insurance companies and 112 insurance brokers. In 2014, the industry`s total premiums totaled Tshs.554.4 billion ($241 million) increasing by 10.7 per cent from Tshs.474.1 billion ($206 million) in 2013.

Tanzania`s insurance sector faces a myriad of challenges that inhibit its advancement, and it is due to these challenges that the industry has continued to register a low penetration with many people uninsured. Some of the challenges include a lack of awareness, immature legal framework, lack of a strong market-led initiative, claims fraud and corruption, under capitalization, legal constraints to new channels of distribution such as banc assurance, weak supervision and lack of vocational training facilities leading to shortage in skills needed in the industry.