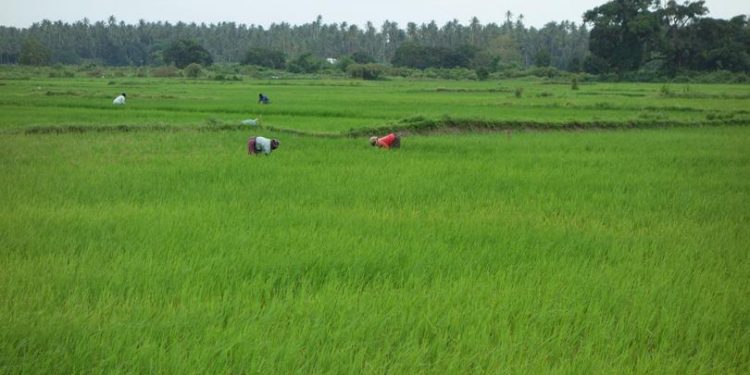 Rice farming in Zanzibar set to receive a boost

Zanzibar needs at least 80,000 tonnes of rice annually to meet the needs of its population, but the struggle to increase production has so far resulted in production of less than 50,000 tonnes last year.

That means the country has to continue relying heavily on imports to feed its more than 1.3 million people (2012 census) as its efforts to increase or produce enough continues with support from foreign countries particularly South Korea, Indonesia, and China.

The government has been making intensive efforts to improve the agricultural sector, particularly since 2011 when Ali Mohamed Shein, shortly after taking over as President introduced ,”The Agriculture Revolution/Transformation Program” with aim to double or triple rice production to reduce dependence on imported rice.

Despite existing and emerging challenges in farming which include insufficient or lack of modern skills and technology and impacts of climate change, the government has maintained its efforts for the last eight years, supporting rice farmers by offering agricultural subsidies to rice farmers by covering 75 per cent of the cost of agro-inputs. Farmers get the inputs at subsidized prices for example Hansunil herbicide from China at Tshs.6,000 ($2.6) instead of Ths. 26,000 ($11.3) per liter and fertilizers at Tshs.10,000 ($4.4) for the 50-kilogram bag instead of Tshs. 60,000 ($26).

In addition a total of 600 farmers received training on good farming practices through Expanding Rice Production Process (ERPP). These cumulative efforts have substantially increased the rice yields from 39,000 tonnes in 2017 to 48,118 tonnes in 2018, equivalent to an increase of 23 per cent.  Likewise, last year also saw a noticeable increase in the availability of various fruits and vegetables, particularly tomatoes.

On 13th December 2018, the Ministry of Agriculture, Natural Resources, Livestock and Fisheries, on behalf of the government , signed an agreement with a contractor from the Republic of Korea for the construction of irrigation infrastructure that will cover a total of 1524 hectares. The irrigation infrastructure covers rice farms in Cheju, Bumbwisudi and Kibokwa villages in Unguja Island while in Pemba the farms are at Makwararani and Chamanangwe villages.

The Zanzibar President stated that the government in collaboration with other development partners designed a special 10 year agricultural program under the name of The Zanzibar Agricultural Sector Development Program (ZASDP) already in progress and to be implemented in three phases, two of which will be of three years and the other of four years.

Despite weather challenges which include variability in rainfall, studies have indicated that Zanzibar can still increase rice and other farm products through irrigation. The Zanzibaris are encouraged to utilize the opportunities citing the development partners who have extended a supporting hand. Training of more Field Extension Officers (FEO), having enough farming tractors, and other important farm equipment, are other ongoing plans to ensure farmers double production. Zanzibar has about 8,521 hectares of land suitable for rice irrigation farming and is targeting to produce at least 50 percent of the required rice by 2020.

In Zanzibar farmers grow different kinds of rice which include New Rice for Africa (NERICA) an interspecific cultivar of rice developed by the Africa Rice Center (AfricaRice) to improve the yield of African rice varieties.

It is said that NERICA rice (takes 80-90 days) is a cross between varieties of high-yielding Asian rice and the robust and disease-resistant African rice, developed at WARDA -the West African Rice Development Agency- a rice research centre. Other types of rice grown include; Super-India which takes four months, BKN-Supa (90 days), TxD 306 and TxD 88 which both take 120 days. According to the Africa Agriculture Status Report (AASR) 2018, countries in the continent are required to do more to improve agriculture, and that the African Union (AU) sponsors a large, highly professional, continuing development of an Africa-wide blueprint for accelerated agricultural growth— the Comprehensive African Agricultural Development Program (CAADP). It says that the Heads of State of all African countries have signed off on it and it has formed the basis for agricultural growth strategies in those countries.

CAADP quantified national targets of six percent agricultural growth rate; 10 percent of national budgets to agriculture, and one percent of agricultural GDP to agricultural research, yet few African countries have come even close to meeting these targets. The reports said “They are expected to be the national targets as more and more African countries commit to accelerated agricultural growth,” as it mentions Ethiopia, as a major success in agricultural growth with 25 years of exceeding the CAADP target of a six percent growth rate, with consequent halving of rural poverty, carefully patterned its strategy and plan on the CAADP model. Ghana and Rwanda are other countries on track with improving productivity. AASR says Political will (that the politicians want to) is the prerequisite to implementation to achieve national objectives.

Description of a “lack of political will” has been prominent in the analyses of poor agricultural performance in African countries.

How Fat is East Africa