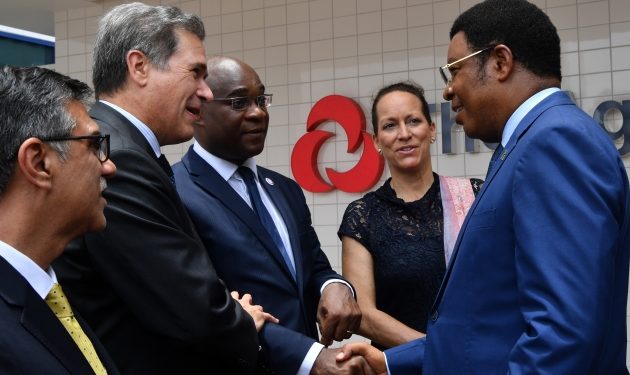 by Giza Mdoe
in Countries, Health, Tanzania, Uncategorized
0
Share on FacebookShare on LinkedIn

Tanzania Prime Minister Kassim Majaliwa has praised efforts by the Aga Khan to improve healthcare delivery in country. The Prime Minister was speaking at a colourful ceremony over the weekend at the launch of the new Aga Khan hospital wing in Dar es Salaam.

The Prime Minister was keen to express Tanzania’s need for affordable and quality healthcare. He said the government welcomes private sector investment in improving healthcare provision in the country.

He said the Aga Khan Hospital is a good example of Public Private Partnership in improving welfare of Tanzanians and Subsahara Africa in general. The PM acknowledged the significant contribution Aga Khan’s new healthcare wing brings to the country and the region saying quality healthcare is key to socio-economic development.

She said the Hospital’s network of healthcare services across the country brings health services close to the people and plays a significant role in mother and child health as well as advanced medical care for the public in general.

She said the government is working to improve healthcare in country and to improve welfare for the people and in so doing the private sector plays an important role.

The event was officiated by among other dignitaries, Princess Zahra Aga Khan who was there on behalf of her father His Highness The Aga Khan. Reading her address, Princess Zahra expressed the Aga Khan’s gratitude to Tanzanian President John Magufuli for his leadership and policies that have allowed quick and profound growth in the health and education sectors.

“Other pressing engagements have kept my father, His Highness the Aga Khan away today but he asked me to carry with me his congratulations, his gratitude to President Magafuli, Prime Minister Majaliwa and to the Government of Tanzania for helping us to construct this state-of-the-art facility in Dar es Salaam,” said Princess Zahra.

The Princess highlighted how the health centre will also serve as an education platform where training doctors and nurses studying at the Aga Khan University will practice. She noted that the Aga Khan health services network is now across 11 regions of the country and has some 35 outreach health centres.

The new state of the art wing has 170 bed and provides tertiary care but is also a referral and teaching centre that will serve as an integrated health care medical facility for Tanzania and the rest of sub-Saharan Africa.

This second phase 2 expansion along with the outreach centres, the Aga Khan Health Services Network offers 806 new jobs and numerous other opportunities indirectly including transportation and catering.

Further still, the hospital’s educational programme currently has 64 medical residents and takes in 60 interns each year from across Africa.

The accredited Aga Khan Development Network has been in Tanzania for over 100 years and work in many sectors of economic and social and cultural development across the country.

With completion of the new wing, the hospital will now serve over one million patients each year, a great stride in providing affordable and quality healthcare to Tanzanians and the entire East and Central Africa.

The USD 83.5 million project was funded in part by the French Development Agency (Agence Française de Développement – AFD) which gave a USD 53.5 million loan while another USD 26.3million was contributed by the Aga Khan Development Network (AKDN).

.Aga Khan hospital was the first hospital in Tanzania to be internationally recognized by the Joint Commission International. In East Africa there are only two hospitals that have the JCI recognition, the second one been Kenya’s Aga Khan University Hospital in Nairobi.