The male conjoined twins who were born on July, 12th 2018 in Kisarawe District of Coast region were conjoined at the abdomen.

by Kawira Mutisya
in Banking, Tanzania
1

The united Bank for Africa (UBA) Foundation has donated TZS 16,080,000 ($7,022) towards the construction of a 2 bedroomed house and provision of a 10 years NHS Insurance  Cover for the now separated twins.

Speaking during the handover, Usman Isiaka, MD/CEO UBA Tanzania said , “When we first read the report on the twins’ mother , Ms. Esther Simon cited lack of health insurance, which would ensure that the children easily access medical treatment in case they fall sick. It is in this background that UBA Tanzania took the initiative to provide the twins with a 10-year medical insurance cover”.

The issuing of the insurance cards to the twins was done on Wednesday 7th November, 2018 witnessed by Prof. Martin Corbally from Ireland, who is currently working in Bahrain and Consultant Pediatric Surgeaon at MNH, Dr. Petronila Ngiloi,  who performed the five –hour surgery.

The MD/CEO UBA Tanzania continued to say “ We visited Ms. Simon in MNH and were notified that the mother and twins could not be discharged from hospital due to poor housing conditions that would not guarantee the twins survival. We visited the home of Ms. Simon, and were humbled and touched, resorting to further assist the family, by facilitating the construction of a home for them”.

In addition to UBA Foundation’s Donation, UBA Tanzania staff also raised TZS 2,000,000 ($873.4) to go towards the upkeep of the twins and their mother.

Speaking on the same event, Emeke E. Iweriebor, Chief Executive, UBA East and Southern Africa said, “The support to Ms. Simon and her twins is driven by UBA Foundation’s strong belief, that great things happen when we come together. We remain committed to positively impacting the lives of Tanzanians by partnering with local communities in support of education and projects such as this.

The male conjoined twins who were born on July, 12th 2018 in Kisarawe District of Coast region were conjoined at the abdomen. The twins were separated in a historic surgery conducted at Muhimbili National Hospital. The surgery, becomes the first of its kind since the last one conducted 24 years ago.

“I am grateful to UBA Foundation, for supporting Ms. Simon and her family, in addition to the support given by the Foundation, the District will provide land on which the new home for the twins will be constructed. I call upon other well-wishers to support the family in any way they can. Interested members of the public can also contribute through depositing funds to the twins UBA special U- care savings account number 56010560001396 Gracious Michael Mkono and Precious Michael Mkono already opened for the twins”, said Hon. Jokate Mwegelo, District Commissioner.

“I commend the efforts of the fifth phase government, in providing relevant enabling environment to MNH, enabling them to perform the surgery successfully and continue to support the twins and their mother until this moment. I also recognize the support of Hon. Jokate Mwegelo, District Commissioner of Kisarawe, who will provide land on which the new home will be constructed for the twins, concluded the MD/CEO, UBA Tanzania. 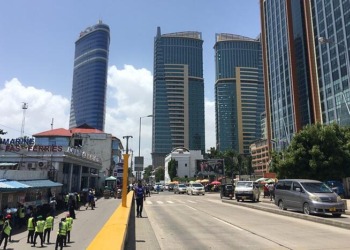 Why Tuskys is Kenya’s most promising elite brand