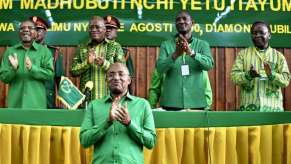 by Giza Mdoe
in Africa, Tanzania
0
Share on FacebookShare on LinkedIn

Dr. Hussein Ali Mwinyi Following in his father’s footsteps, He contested for and won the office of the President in Zanzibar.

Elected on 28th October, his landslide win was announced the following day after he racked in over 76 percent of all votes. In his acceptance speech, delivered minutes after his win was announced, the newly elected president of the Isles took the opportunity to call for unity and to put aside all differences.

It is now time to build a new Zanzibar, he said in his acceptance speech.

” Zanzibar is bigger and more important than any of our difference,” he said and let us now set aside our differences, the president-elect.

Born on 23 December 1966 Dr. Hussein Ali Mwinyi is the current Minister of Defense and National Service of Tanzania and is the son of former president Ali Hassan Mwinyi. His father was the second president of the country (1985-1995) after Mwalimu Nyerere, Father of the Nation.

Tanzania went to the polls on 28th October, as per regulations of the Zanzibar Electoral Commission (ZEC) voters on the Isles begun their voting a day earlier with focus on special groups.

Generally the elections were considered to have been peaceful and largely uneventful except for isolated incidences particularly on the Island.

While several international media reported clashes and fatalities, no official report has been issued on the ground except for a confirmation by police that over 70 persons were been held in relation to disruptions and breaking of peace.

There are also cases of unconfirmed claims by opposition parties alleging irregularities and, however these to have no official report.

8th Angel Fair Africa to be held in Senegal