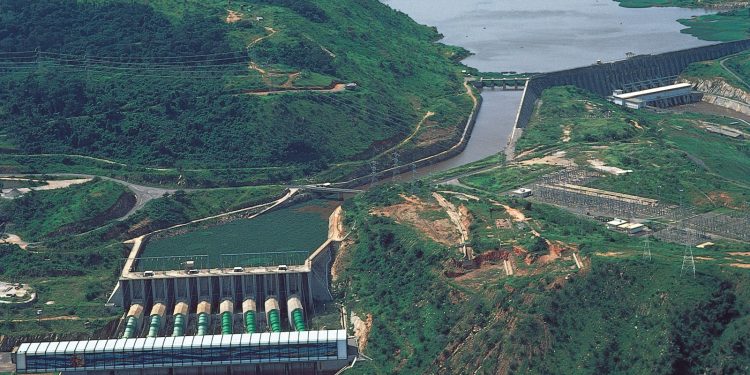 The Inga Dams 1 and 2. AfDB has approved the allocation of USD 20 million in loans to the Democratic Republic of Congo, to support renewable-based, mini-grid solutions to light 3 DRC cities.. [Photo/ International Rivers]

How the Congo River could power Africa

The Grand Inga hydropower project could be the answer to Africa’s power problems but frequent delays mean that the Congo, and Africa, cannot benefit as yet from its huge potential.

Straddled along the mighty Congo River, the power project has the potential to end Africa’s power woes for good.

However, politics and instability in the country of 70 million people mean that a part of the project that was supposed to kick off last year will take longer.

Last year, the Democratic Republic of Congo was planning to start work on the Inga 3 project after receiving a joint bid from China Three Gorges Corp. and Actividades de Construccion y Servicios SA of Spain.

The two previously competing consortia submitted a joint bid on June 6 for the Inga 3 hydropower project.

Bruno Kapandji, the director of the Agency for the Development and Promotion of the Grand Inga Project, said the project that will produce 11,000 megawatts is expected to cost $13.9 billion.

Speaking at a conference in Lubumbashi, Kapandji said their aim was to start Inga last year.

The DRC which is the world’s largest cobalt source and the continent’s biggest copper producer has been considering building Inga 3 for more than three decades.

It is expected that the Grand Inga hydropower complex would give a solution to the debilitating power shortage that has limited the mining-industry’s growth.

In a treaty signed in 2013, the Congo would export 2,500 megawatts of power to South Africa.

According to the World Bank, the Inga 3 plant would form part of a larger complex spanning part of the Congo River and produce as much as 50,000 megawatts when complete.

While the mining industry’s energy deficit has increased from about 500 megawatts to 1,300 megawatts, Kapandji says the Inga 3 construction would take as long as seven years to complete.

On completion, the consortia would operate the power project.

In October last year, the DRC signed the deal with the Chinese and Spanish partners but concerns soon emerged claiming that the USD80bn Grand Inga project was overpriced and susceptible to corruption.

An environmental lobby group, International Rivers, said the project to be funded by the African Development Bank (AfDB) and the European Investment Bank (EIB) also posed other risks in the volatile country.

The project has been embroiled in controversy since it was announced leading to the World Bank withdrawing as a potential sponsor in 2016.

International Rivers, which is aimed at protecting rivers and the riverine communities’ rights, said that South Africa should scrap the plan to import power from the Congo.

The proposed Grand Inga Dam is at the Inga Falls and is the largest of the Inga dams at 8 kilometres followed by Inga-I at 7.3 kilometres and Inga-II which is 6.5 kilometres.

In comparison, the Grand Inga Dam is almost twice the capacity of the Three Gorges Dam on the on the Yangtze River in China.

If completed, the Grand Inga project would be the largest hydro-electric power generating facility on earth.

It has the potential to produce 38.9 gigawatts (GW).

However, Africa has a huge potential and advantage of all forms of energy, hydropower, solar, wind and fossil fuel.

The Grand Inga project proponents who are mainly African governments and development organisations consider hydropower to be clean renewable energy favouring the exploitation of the Congo River potential to power the continent.

The project is a priority for a number of organisations including the New Partnership for Africa’s Development (NEPAD), the Southern Africa Development Community (SADC), East African Power Pool (EAPP) and ESKOM.

It is the centrepiece of a grand vision to develop a continent-wide power system and with the elections in the Congo having concluded, it is possible that finally the project could kick off in earnest to bring the much needed power to the people.