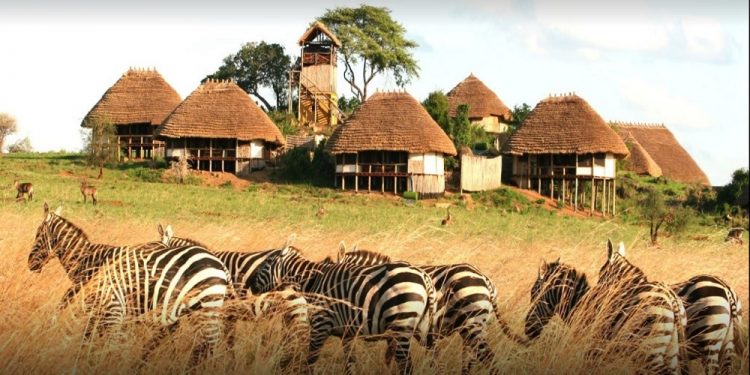 The Kidepo National Park in Uganda. It is one of the 5 places that make Uganda the ultimate holiday destination. [Photo/Lawrence Ogaba]

by Njenga Hakeenah
in Hospitality, Uganda
0
Share on FacebookShare on LinkedIn

Uganda has not earned the ‘pearl of Africa’ moniker for nothing.

It is beautiful, exquisite and serene especially for those seeking places they can visit to unwind.

One of the country’s attraction is the Wildwaters Lodge which is nestled along the Nile in a luxuriant rainforest. The lodge is on its own private island with a breathtaking thick riverine forest.

The forest naturally covers the island and each of the ten timbre-floor rooms.

All the rooms have private views over the River Nile and its rapids and you would have to be there to have the experience of a lifetime.

Another place to visit for its scenic beauty is the Kibale Forest Park.

The flora and fauna in Kibale Forest seem like they have been pulled out of an animated movie. It is another whole world out there.

Kibale’s varied altitude holds up different varieties of habitat. These vary from the evergreen forest along the Fort Portal plateau and a dry tropical forest before getting to the woodland and savanna along the Rift Valley floor.

The forest has 13 species of primates and safaris can be organised ranging from tours to gorilla trekking holidays.

To understand the community, the people living around Kibale National Park are mostly Batoro who are native to the region and the Bakiga who immigrated from the southwestern part of Uganda. The Batoro have a king- Omukama- while the Bakiga still hold their culture and tradition well expressed in their dance, folklore and language.

At the park, the Nile explodes through a narrow gorge and cascades down to become a hippo, crocodile, waterbuck and buffalo habitat downstream.

Murchison Falls, also referred to as the Kabarega Falls, is a waterfall found on the course of the great Nile. The view is breathtaking!

If planning a trip to the park located in the northern region of the Albertine Rift Valley, be ready to see among others Lakes Albert and Victoria.

There are gorges, escarpments, plains and various flora and fauna which are unmissable. For ease of planning, it is advisable to use safari companies which offer packages that include various destinations within the great lakes East African region.

The Kidepo National Park is another jewel on Uganda’s crown where a visitor will come face to face with wildlife that cannot be found in any other Ugandan national park.

The virgin national park is undoubtedly among the best wilderness areas in Africa.

It offers more than just wildlife since Kidepo is another great spot for a cultural trails especially for the Karamojongs, Acholis and other great tribes.

Despite its vast wealth in wildlife, the park remains unknown to many.

Kidepo Valley National Park was gazetted into a national park in 1962 and currently has over 75 species of mammals and 470 species of birds.

And what better way to end a tour in Africa than visiting the Queen Elizabeth Park which is a 5 – 6-hour drive from Kampala?

If you need to be there in a shorter time, you can fly as you savour the magnificence of Uganda from the air.

Located in western Uganda, the park is shared by Kasese, Bundibugyo and Bushenyi districts.

It includes parts of Lakes Edward and George which are linked by Kazinga channel and other attractions.

The park has a rich variety of flora and fauna and it’s acknowledged to be a habitat for over 95 mammal species with about 612 species of birds.

Indeed Uganda is the pearl of Africa and it is worth a visit not just for the wildlife but also the rich culture that it has to offer.

I have 10 years of experience in multimedia journalism and I use the skills I have gained over this time to meet and ensure goal-surpassing editorial performance. Africa is my business and development on the continent is my heartbeat. Do you have a development story that has to be told? Reach me at [email protected]change.africa and we can showcase Africa together.