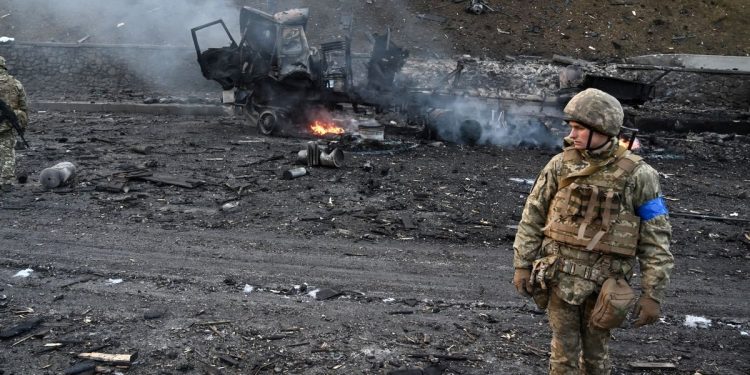 The Ukraine invasion by Russia and the resulting conflict has created an economic vortex for the whole world.

Reports state that from the time the Ukraine invasion began at least 10 million people have been displaced from their homes creating a humanitarian crisis. The invasion is a cause for concern for African countries many of which have ties with Russia which lent them military support in their respective struggles for independence. Several of them like Zimbabwe abstained from voting against the Ukraine invasion out of fear of straining relations with Moscow.

The adverse effects of the Ukraine invasion stem from economic contagion resulting from globalization. Countries that were dependent on Ukraine and Russia for their exports will record lower exports and subsequently lower income. Prior to its invasion Ukraine had been a hub for education at a higher level for African countries.

Post the Ukraine invasion prices of commodities and energy have risen sharply which will curtail the ability to developing countries to compete in the world markets.

Diversification of African economies is no longer optional. It should be treated as mandatory. This is if the Ukraine invasion has taught the world anything. The Ukraine invasion has shown the world what can go wrong when nations get too comfortable in their dependence on other countries for their economic wellbeing. This invasion which began a that on the face of it looks like a war for territory which historically belonged to the Soviet Union has taken on a moral narrative. A globalized world functions best when all countries cooperate. When one or more of those countries go rogue and say invades its neighbour then the other countries can strangle the aggressor’s economy until they decide to behave in a more acceptable manner.

But what happens when that aggressor plays an integral role in the world economy like supplying well over 60% of Europe’s gas and energy needs? This is not a rhetorical question. The answer to the question has played out for the world to see. Economic powerhouses like Germany have condemned Russian aggression against Ukraine but have shown hesitancy in turning off the Russian gas taps. The United States banned Russian oil but they were never really a big buyer of the black gold from Russia to begin with. Britain has sought oil from Saudi Arabia much to the irritation and outcry of opposition politicians in that country over the human rights record of the Arab country.

African countries for the most part do not have such economic clout. They are heavily dependent on Russian economic assistance. This assistance as mentioned earlier is historic.

The Ukraine invasion and the subsequent war has already disturbed not just crude oil supplies but also the supplies and prices of other critical commodities like wheat. Bread is produced from wheat and the majority of consumers of bread are low income or poor households. The households most vulnerable to kind of price shocks seen in the commodities market. What can African countries do to rid themselves of this disproportionate and unhealthy dependence on other countries for their sustenance?

When elephants fight it is usually the grass that suffers. This conflict is especially senseless. It’s bad enough that it has resulted in what is possibly the worst humanitarian crisis in modern history it has also resulted in an economic vortex that is starting to suck in countries that have little or nothing to do with this conflict.

There are no winners in this war. Ukraine has seen at least 3 million refugees displaced from their homeland into surrounding countries. That many people moving from one place to another is certain to cause strain on the resources an infrastructure of the countries that will host them. A mass exodus of this magnitude will cause strain on the social resources of the countries where refugees are. Ukraine itself will not be the same again.

Its cities and towns have been pummeled by incessant shelling by the Russian armed forces. It will take years to repair the damage and the havoc wreaked by Russian troops. The loss of human life on both sides has been exponential.

Russia for its part has been slapped by the most unprecedented sanctions in recent memory. Capital is leaving that countries shores en masse. The central bank of Russia has been sanctioned and at least half of the USD 630 billion of that country’s reserves have been confiscated. Russia’s exports of oil and gas have been banned forthwith by the United States and are progressively being phased out by Europe.

If Vladimir Putin expected a quick victory like the kind he enjoyed when he annexed Crimea and he invaded Georgia, his experience this time has left him frustrated and scratching his head. The Russian strong man is not taking well the spirited resistance his army is getting from the Ukrainian people.

So, what does this fight have to do with Africa?

It’s easier to establish the connection between the conflict and Europe and the United States but it’s not immediately obvious to see the nexus and its impact on not only Africa but the rest of the world. The impact of this war economically has been widespread. It’s shown the vulnerability of most of not all the countries in Africa. It is not only Africa that’s being adversely affected.

Globalization has been a recurring theme from the mid-nineties to the turn of the century. Through this phenomenon most if not all countries are interdependent in some way through regional economic cooperation. This interdependence makes countries vulnerable to one party being troubled. It simply means that economic trouble in one part of the world can have an impact on other countries in a different part of the world. This phenomenon can be referred to as economic contagion.

This economic contagion has been made more poignant in this conflict.

Germany the foremost economy in Europe and soon to be foremost in terms of military capability since it has been allowed to rearm as the threat of a Russian nuclear war becomes more real. This European powerhouse was reluctant to impose severe sanctions on Russia in response to its aggression towards Ukraine. The Germans were not willing to turn off the gas taps on Nordstream 2. The reason for this is because the country is heavily dependent on Russian gas.

Britain was also jot able to immediately turn off the tap on Russian gas and oil imports the way that the US had. They opted instead to phase out oil and gas imports from Russia gradually. Globalization offered countries strength from economic and regional integration but has also made the same countries vulnerable economically and susceptible to economic contagion.

If Europe and Britain are unwilling to immediately stop the flow of Russian oil and gas to their countries what more of African countries? The Russo-Ukrainian conflict has sent the prices of oil and gas through the roof. Oil and gas are critical inputs to every kind of economic activity. This by extension means that national economies are sensitive to the prices of energy. When energy prices are low companies can optimize their operations and maximize value. When the price of energy spikes the way that it has in response to the conflict it causes inflationary pressure.

The countries that export oil will no doubt be smiling at the price developments but not every country in the world exports energy. A good number of those countries import energy, and they will from now on also import inflation and volatility into their local economies.

Wealthy countries that have reserves of oil like the US have announced interventions to release these reserves to mitigate the price volatility and its inflationary effects. The question is what can and what are African countries doing in response to this volatility. Sadly, most if not all countries in Africa are so poorly run economically, they will ride out of the vagaries of volatility caused by spike in oil prices.

What is the way forward?

Countries in Africa and indeed all that do not export oil but import it for their daily needs need to renew their focus on accumulating and building up reserves of foreign exchange. Reserves enable a country to absorb shocks to their economies from local sources and external sources. The conflict in Ukraine itself is a shock and its consequences have also become a shock which countries need to do more mitigate but are sadly not able to.

Take the case of Zimbabwe, it is not involved in this conflict in any way and yet will be adversely affected by the blow out. The southern African country has struggled with inflation from its local economic difficulties. These will further be compounded by the inflation it will be importing from fuel it imports.

Inflation which has been on the rose globally from the stimulus measures employed by many countries around the world to reboot their economies after the pandemic will not subside on the wake of rising oil prices which have been projected to rise to as much as USD 300 a barrel by some pundits.

Inflation is not good for savings as it reduces the buying power of a currency. Savings will be eroded in countries poorly prepared to tackle the new wave of inflation and when savings are eroded investment will be undermined. This does not bode well for the prospects of such countries.

There is little to cheer on the currency front. As countries that import oil start to pay more for the same quantities or less, they will experience rapidly depreciating or reducing reserves relative to their oil-exporting counterparts. While these dynamics may provide opportunities in the financial markets ultimately this war has produced no winners. It has the potential to reverse the gains that have been made by the world economy which was starting to recover from the pandemic.

World: Ukraine war has become a catalyst for volatility