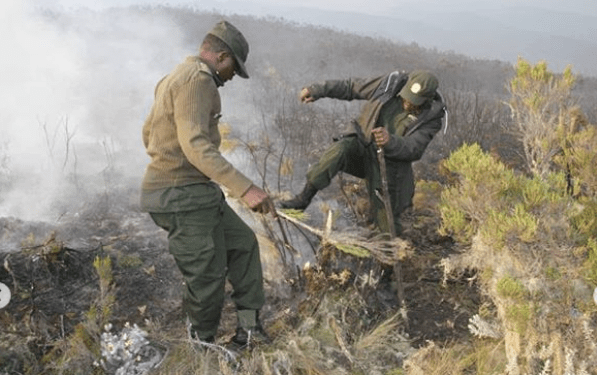 Mount Kilimanjaro is the highest peak in Africa and one of the iconic tourist destinations in Tanzania.

It is no quite often Tanzania experiences wildfires ravaging world heritage sites, but currently, it is facing fire battle. For nearly five days now wildfire has been causing havoc in Tanzania’s Kilimanjaro mountain and Africa’s highest peak—with 5,895 meters.

According to information from The Citizen, still the Tanzania National Parks (TANAPA) until yesterday, still, no new information on the progress of the fire had been produced.

According to  TANAPA communication official Pascal Shelutete on Tuesday, the fire which was sparked on Sunday afternoon in Whona—a tourist stopover was caused by porters warming food for tourist, according to information from The Citizen.

Hence—since then the event has drawn hundreds of firefighters and non-firefighters on the mountain, all in the efforts to put it out.

“Though there could be more to this fire preliminary evidence points Whona where visitors were warming their food. As you know this is a dry season and fire spreads very fast” he added.

Until Wednesday almost 85 to 90 per cent of the fire was contained, TANAPA conservation commissioner Allan Kijazi, according to information from The Citizen.

Further, on Wednesday firefighters were under the assumption that the fire was being dealt with, but strong winds blew the wildfire back to life, igniting massive flames, nearly visible almost 30 kilometres in Moshi town.

The Kilimanjaro mountain is an iconic element in Tanzania’s tourism industry—hence currently TANAPA unequivocally stated that other tourism operations are going on as planned.

“Our task forces are on standby anytime to ensure tourists accessing the mountain are not harmed, as the fire does not pose threat to all hiking operation” he added.

On the other hand,  a few groups of mountaineers were evacuated on Thursday when the fire got strong, according to information from DW.

The TANAPA official stated that the affected area was at Mandara Hut—which is at around 2700 meters and Horombo Hut which is at about 3700 meters.

Hence—the official was quite direct with the environment affect, “the natural vegetation that caught on fire is largely shrubs and not forests”.

According to the Minister of Natural Resources and Tourism, Dr Hamis Kigwangalla, the affected area had an ongoing project—a new modern, larger and eccentric huts, there are all wiped off by the fire.

The popularity of Mount Kilimanjaro is enormous. It stretches far and wide.in 2013 the World Bank—Tanzania’s close development partner noted that it was the potential of tourism, gaining nearly $50 million in revenue annually.

Nearly 50,000 tourists climb Mount Kilimanjaro annually, thus—the Tanzania government is anticipating on enhancing that number by 50 per cent via installing cable cars transportation to and from the mountain.

Hence—with such investment underway, it is rather crucial for wildfire preparedness mechanisms to be upgraded too, for the sake of the environment and the prestigious heritage in Tanzania’s hands.

It is crucial to get around the vital facts about wildfires and get a rather deeper understanding in dealing with it.

As 90 per cent of all wildfires are caused by humans. It is of paramount importance for Tanzania to get it hands across robust disaster strategies and wildfires management is crucial.

It is important to do a cross-examination on disasters to get a picture on what Tanzania could be dealing with if such wildfire is the new normal.

Across Africa, between 2006 and 2015 the damage caused by disasters cost the region around $8.1 billion (The Conversation, 2018). While floods could cost Tanzania nearly $2 billion annually by 2050 unless it acts effectively against destructive floods.

Over the past years, Tanzania has been demonstrating rather promising leads in handling a couple of disasters, for instance—earthquakes and flooding events across the country. However, there is more to be done, to ensure smooth relief is provided and resilience is gained.

With this on the table, what’s left is for Tanzania to rather throw in financial and intellectual investment in wildfire management. Also, a 2013 fire baseline report published by Food and Agriculture Organisation (FAO) argued that an average of 11 million hectares burns annually (ranging between 8.5 and 12.9 million hectares) in Tanzania.

“This corresponds to between nine and 14  per cent of Tanzania’s land area. Most burned area is recorded in the months from May to October, with the peak fire activity in July and August,” the report stated. These numbers suggest more efforts need to be put in wildfire preparedness.

Sadly, the procurement of a fire suppression helicopter is now underway—according to the minister. This mars efforts in dealing with fires but put the ecological landscape at risk of wind and other factors chime in favour of the wildfire.

All these steps ought to be guided by well informed and data-backed efforts of boots on the ground. Hence—in this case, and other events Tanzania could utilize geographic information systems to counter-attack wildfire particularly using drones in a wildfire, detection, containment, surveillance and suppression, but also invest in aircraft to extinguish the fire quickly and effectively.

At present, multi-task forces are underway dealing with the fire, and local communities are weighing their fare share.  It is also important to invest in research to improve understanding of such fires, build awareness, establish reliable fire monitoring system and more importantly involve local communities in planning and implementation of the plans.

The fire outbreak comes as Tanzania executes its tourism comeback plan after coronavirus (COVID-19) took a toll on the profitable sector earlier this year.