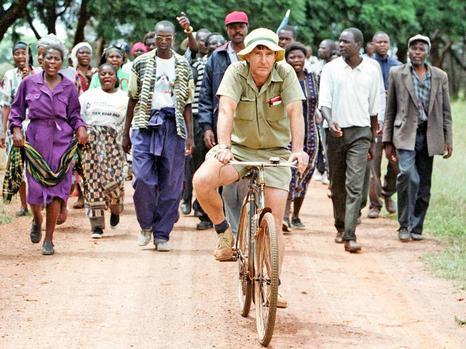 Will Zimbabwe Compensate White Farmers or Not?

Will Zimbabwe Pay White Farmers Or Not?

The new government of Zimbabwe is hoping to make amends with its white citizens and investors but it may not be as easy as letting bygones be bygones.

While on the one hand, the government was hoping to apiece the said white communities by offering to compensate what they lost during the reign of the past regime that grabbed land and other properties from them, several functions in Zimbabwe will not have it.

As part of its deal with the US to have sanctions lifted, Zimbabwe was required to compensate the white farmers. And so earlier in August of this year, the government had announced that it intends to pay a whopping USD3.5 billion in compensation to white former landowners. Following the announcement, a group of ex-fighter gave the new government a 48 hours ultimatum to rescind the offer.

Also Read: Africa’s Debt Relief and the G20 Debate, why Senegalese President Macky Sall is right in his quest

The group was avid about the government’s decision and warned that if it did not take back the offer then they would take the matter to High Court.

In what is called the Global Compensation Agreement that was entered between the government and local farmers’ representative groups would force the government to pay for lost.

However, “the government is not obliged to pay any compensation for movable assets that were left behind such as irrigation pipes, tractors, and all other farming equipment,” stipulates the agreement.

Well, the war veterans will have none of that, in a letter to the Lands Minister Anxious Masuka, titled, ‘Demand for Suspension For Its Discriminatory’,

the group said if the white groups are eligible for compensation, then the former settlers must also pay compensation for the land they forcibly took from Zimbabweans during the onset of colonialism in the 19th century.

“Clients instruct that we demand on their behalf, we hereby do, that within 48 hours of receipt of this letter issue out a response(s) to ourselves together with a public statement admitting that the recent July 2020 compensation claim for farm improvements agreement between government and former settler white races progeny citizenry was discriminatory,” reads the letter by Kanoti and Partners Public Interest Lawyers.

On the other hand, the government is determined to see the agreement through, though it does not even have the money it is pledging to pay back.

During the signing of the agreement that would see white farmers get compensated, Zimbabwe’s Finance Minister Mr. Mthuli Ncube said, “…in the agreement we have given ourselves 12 months to run around the world, around Zimbabwe to think of ways of raising this funding.

We are determined that we achieve that. It’s also about pledges not necessarily about cash being put on the table. It’s about commitment.”

Details of how much money each farmer or their descendants, given the time elapsed since the farms were seized, was likely to get were not yet clear, but the government has said it would prioritize the elderly when making the settlements.

Should the deal go through, then the farmers would receive 50 percent of the compensation after a year and the balance within five years.

Also Read: Africa’s Debt Relief and the G20 Debate, why Senegalese President Macky Sall is right in his quest

In the early 2000s, the then Zimbabwean regime started seizure of white owned lands. The move was explained as an effort to redress colonial land grabs that occurred during the colonial period of the 20th century.

Numerous white settlers were displaced and there lands and properties reprocessed by the government or were looted. In response, the US and the international community placed heavy sanctions on Zimbabwe that have weighed heavily on the country’s frail economy.

Now, thanks to pressure from the US and Zimbabwe’s need for the sanctions to be lifted, the latter agreed to compensate the white settlers for land that they lost.

Zimbabwe went ahead and announced that foreign citizens who had their land seized could now apply to get it back.

To allow the former owners to regain possession of their land, the government was forced to revoke offers it had earlier made to black farmers.

The move is seen as the only way that the country can repair relations with Western nations and avoid any worse international sanctions.

The way forward: Can Zimbabwe resolve its racial divide?

In March 2020, Zimbabwe’s President Mnangagwa commissioned the long stalled Nyakomba Irrigation Scheme in Nyanga. The USD15 million project was meant to start working in 2015 under a Japanese Grant Aid but it never did.

The Ministry of Lands, Agriculture, Water and Rural Resettlement’s Department of Irrigation and the Japan International Cooperation Agency (JICA) was involved in the rehabilitation and development of the facility.

Zimbabwe is hoping to achieve its development vision 2030 that is based on agricultural development and modernized agriculture and the irrigation scheme is seen as the much needed stepping stone.

However, none of this will bear any fruit unless the animosity that lacks in the shallow racial dispute graves is addressed. The government may want sanctions lifted and hopes to clear its name in front of the international community but it must also make peace back home.

If the new government does not address lingering disapproval in the local community, it may very well find itself faced with civil strive that will drive it right back into the economic back hole that it is so desperate to leave.