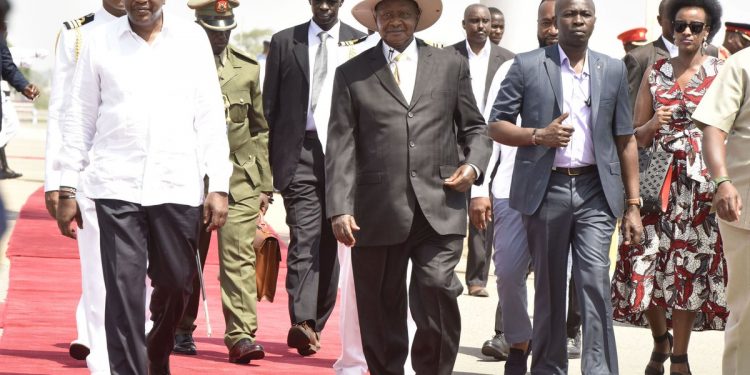 President Uhuru Kenyatta(L) with President Yoweri Museveni at the Moi International Airport when the Ugandan leader landed for a two-day state visit.

President Uhuru Kenyatta and his Ugandan counterpart Yoweri Kaguta Museveni have expressed satisfaction with the level of cooperation between Kenya and Uganda in areas of mutual benefit.

Addressing the press at State House, Mombasa, after the two Heads of State led their delegations in bilateral talks, President Kenyatta commended the two delegations for ensuring that the inaugural session of the Joint Commission for Cooperation is a success.

“I am particularly pleased with the progress we’ve made in recent years in the areas of trade promotion, the free movement of goods, services and people across our borders, and the people-to-people interactions,” President Kenyatta said.

President Kenyatta noted the success of the One Stop Border Post at Busia and the ongoing improvement of infrastructure and processes at Malaba and Lwakhakha Border Points.

He called for an increase in the number of one-stop-border-posts to promote the free movement of goods and people between the two countries.

On his part, President Museveni commended President Kenyatta for enhancing efficiency at the Port of Mombasa by modernising infrastructure and re-engineering systems, interventions that have increased the speed of cargo clearance.

“During his first term in office, President Kenyatta took the perennial problem of delays at the port head-on,” President Museveni said.

President Museveni pointed out that the enhanced efficiency in handling of cargo at the port and in the movement of goods along the Northern Corridor has been of great benefit to the economies of both Kenya and Uganda, and for the other countries that depend on the Port of Mombasa for their import and export business including Rwanda, Burundi, South Sudan and the Democratic Republic of Congo.

Uganda is the biggest use of the port of Mombasa among regional states commanding about 74 per cent of transit goods.

Museveni has since commended President Kenyatta for the rapid development of infrastructure in Kenya.

“While we are still waiting for the railway (in Uganda), the Kenyan Government has already moved and is now constructing modern jetties and petroleum pipelines,” President Museveni said.

President Kenyatta commended the Government and the people of Uganda for their trust and continued use of the Port of Mombasa.

The Kenyan leader invited his Ugandan counterpart to join in the joint development of the SGR to ensure that the line continues all the way to Kampala as envisioned.

Kenya completed Phase one of the SGR (Mombasa-Nairobi) and operationalized it in May 2017. It was constructed at a tune of Sh327 billion (US$3.2 billion), with funding (loan) from the  Exim Bank of China..

The country is currently putting in place Phase 2A of the project at a cost of Sh150 billion (US$1.5 billion).

The 120-kilometre line which runs between Nairobi-Mai Mahu and -Duka Moja, a small centre between Suswa and Narok town is 90 per cent complete.

The government is said to be in negotiations with Beijing for an additional Sh370 billion (US$3.7billion) to complete the remainder of the project, which is Phase 2B (Duka Moja-Kisumu) and the final stretch (Phase 2C) connecting Kisumu to Malaba.

Speaking at a recent meeting at the Chinese Embassy in Nairobi, Kenya Railways acting managing director Philip Mainga said the government is keen to secure funds during the second Belt and Road Forum for International Cooperation (BRF) set for Beijing next month.

“We hope to sign phase 2B during the meeting,” Mainga said, “Kenya Railways is working with the Chinese government in achieving the commitment we have on the 974 kilometre Mombasa-Malaba SGR project.”

Phase one of the SGR project was constructed by China Road and Bridge Corporation while Phase 2 is being developed by a sister company-China Communications Construction Company (CCCC).

Uganda is expected to pick the project from Malaba and take it deep into Uganda, with plans to connect the rail to other East Africa Member states among them Rwanda.

On Migingo, President Kenyatta said Kenya and Uganda were working together to address the issue.

“Lake Victoria is an important transboundary resource that has continued to support the livelihoods of our people, not just in Kenya and Uganda but the entire East African region,” President Kenyatta said.

President Kenyatta also spoke on the bilateral relations between Kenya and Uganda, saying the two countries shared a strong and principled commitment to multilateralism and the reform of the institutions of global governance, including the United Nations Security Council.

“It with this background, that Kenya presented its candidature for a non-permanent seat of the United Nations Security Council for the term 2021-2022. Kenya, Your Excellency, counts on the support of Uganda and her East African sister nations to make this aspiration a success,” President Kenyatta said.

President Museveni is expected to travel to Nairobi using the SGR, making him the first visiting Head of State to use Kenya’s modern train. 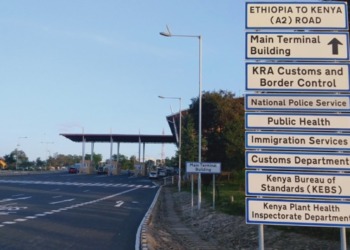 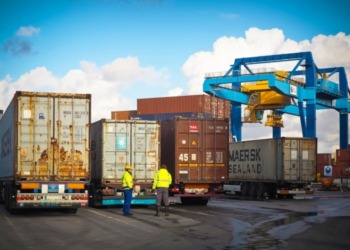