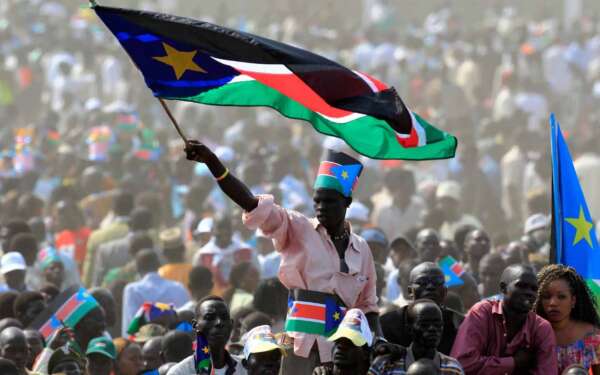 South Sudanese celebrating the birth of a new nation. The country is doing well economically defying effects of the pandemic. [Photo/Ankasam]

South Sudan may be the newest nation in the world but this does not mean that its economy is still too young to be noticed when its trajectory moves upwards.

The Eastern African nation is edging out giants in the region including Kenya and Uganda to become the fastest growing economy in the face of the Covid-19 pandemic. The virus has ravaged economies around the world but for South Sudan, the country is defying the effects to register a 4.1 per cent GDP growth ahead of Ethiopia and Tanzania with close to 2 per cent and Kenya with 1 per cent.

A report by the United Nations Economic Commission on Africa (UNECA) shows that the country of 11 million is outshining its regional peers which will see many countries fall below pre-2020 projections.

The African Development Bank (AfDB) estimated the country’s real GDP growth at 5.8 per cent in 2019 which was a large increase from 0.5 per cent in 2018.

Reopening some oil fields, including those in Upper Nile state and resuming production, was one of the reasons driving the 2019 rebound. In addition, the peace agreement signed in September 2018 was a major boost for the economy.

South Sudan’s oil sector remains the key driver of the economy followed by services and agriculture.

In March 2019, AfDB noted that the country was in debt distress due to high and extra-budgetary spending.

However, shrugging off the derailment by the Covid-19 could be a silver lining for the economy whose real GDP growth was projected to hit 7.4 per cent in 2020 and 6.1 per cent in 2021.

The country’s oil exports are expected to reach 180,000 barrels a day, a move that will boost foreign reserves. With increased production, sectors like manufacturing, education, mobile money and water infrastructure will benefit from the increased electricity supply.

With an improved peaceful climate in the country, private investors have a reason to confidently invest in South Sudan with foreign investment expected to reach US$30 million in 2020.

In diversifying to move away from reliance on oil, South Sudan’s government is looking to increase nonoil revenue collection through the single treasury block account it has created for the National Revenue Authority.

Before the pandemic, the country’s economic growth had registered a four-year contraction but improvement started in the FY18/19 when South Sudan’s economy reached 3.2 per cent.

The World Bank forecasts a favourable economic outlook as long as the peace agreement holds failure to which it could push the economy back into recession.

A downside for the country is that it is one of the most oil-dependent countries in the world where the commodity accounts for almost the totality of exports and bringing in 90 per cent of revenues. The sector also accounts for more than one-third of the country’s gross domestic product (GDP).

Outside the oil sector, livelihoods are concentrated in low productive, unpaid agriculture and pastoralists work.

If South Sudan successfully shifts from continues under-investing in sectors that would have the largest knock-on effect on poverty reduction and building resilience, then it could very well be on its way to achieving growth its peers would be envious about.

An October update by the World Bank notes that poverty levels are expected to remain extremely high on the back of severe food insecurity and limited access to basic services across the country. About 82 per cent of the population in South Sudan is poor according to the most recent estimates, based on the US$1.90 2011 purchasing power parity (PPP) poverty line.

The country could achieve its economic and social ambitions by addressing the underlying causes of conflict and restoring peace and stability while also implementing comprehensive macroeconomic reforms, including measures to unify the exchange markets, reduce inflation and diversify the economy.

Increasing allocations and investment for service delivery, particularly in education, health, and rural development are necessary to improve resilience, reduce poverty, and build a stock of human capital and avoiding a lost generation.