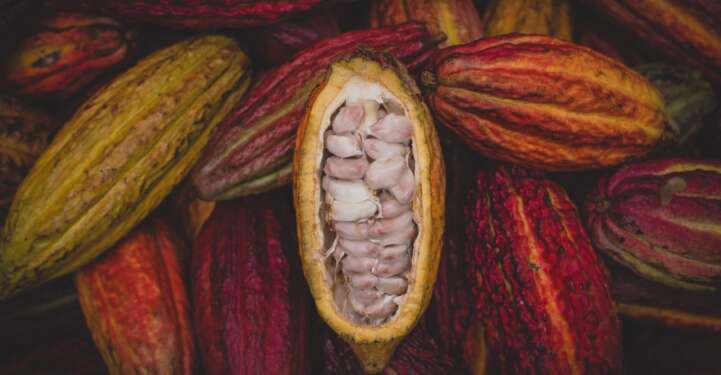 Cocoa beans. The world’s biggest cocoa producers have led a successful cocoa revolution in West Africa by dictating the prices for the commodity. [Photo/WCF]

Up to 50 million people around the world, including around five million smallholder farmers, depend on cocoa which is essential to their livelihoods.

Africa is the world’s major cocoa producer with West African nations—Côte d’Ivoire, Ghana, Nigeria, Cameroon and Togo—producing an estimated 70 per cent of the world’s cocoa on 1.5 million farms. The majority of the crop comes from small farms of between three to five hectares.

From the multi-billion value of cocoa globally, farmers earn only about 6 per cent of the chocolate industry’s total revenues on average. The sad reality is that many cocoa-producing communities in West Africa lack access to education, clean drinking water and other basic social amenities.

In addition, to maximise earnings by reducing production costs, farmers tend to prefer child labour with estimates showing that almost two million children work on cocoa farms in Ghana and Ivory Coast. These children aged between five and 17 are exposed to agrochemicals since they do not have protective equipment, working at night and the use of dangerous tools.

With the living conditions deteriorating, pledges from chocolate manufacturers to end abusive employment practices in their supply chains have gone unfulfilled with a 14 per cent increase in the number of children working in cocoa farms over the past 10 years. Over this decade of child labour, the cocoa industry has seen a 62 per cent rise in production.

Louisa Cox, Director of Impact at the Fairtrade Foundation in the UK says that long-term finance, training and technical services, and helping farmers diversify ‘beyond cocoa’ is needed to help address child labour in the cocoa industry.

Towards this end, Federated Commodities (FedCo), which is an indigenous licensed buying company (LBC) founded in 1996 in Ghana has sustained a track record of taking to eliminate child labour in the cocoa industry.

In an interview with AfricaLive.net, FedCo Managing Director, Hajia Maria Adamu-Zibo, says that to help promote sustainability in cocoa production, the buying company engages in the supply of traceable and certified cocoa beans through community development and capacity–building of farmers.

Under this programme, farmers are trained on good agricultural, business and social practices to empower them economically.

FedCo has more than 50,000 farmers who make up its supply base with the FedCo Cocoa Farmers Association consisting of about 15,000 farmers. The association provides benefits, including social, loans and bereavement support facilities.

The loans given are meant to help members set up farms, buy agricultural inputs, and to pay school fees for their children.

Since 2012, FedCo has supplied over 44,000 metric tonnes of sustainable cocoa beans and invested about US$7 million in sustainability, through training, cash premium payments and various projects.

To reduce reliance on cocoa especially during the lean period season, farmers are diversifying into the cashew market.

The unfortunate fact about many cocoa-producing countries is that they still rely on exporting raw beans.  This means there is rarely local processing and inspiring local consumption which offer the chance to build up revenues and create employment. Most of what is produced in the West African region is mainly exported unprocessed to the European Union and North America which destroys local value and denies locals employment.

Most of the schemes launched by governments in this region are majorly to increase raw material production rather than encouraging local consumption.

In Côte d’Ivoire, though, French chocolate manufacturer Cémoi opened its Abidjan facility in May 2015 which was later followed by the inauguration of its first chocolate factory. To show the success of the investment, sales from the factory beat forecasts a year later which motivated the company to double production in the country to 10,000 tonnes over the next three years.

The ambition was not just by Cémoi but Ivorian authorities also targeted processing 50 per cent of its cocoa locally.

Since cocoa accounts for 15 per cent of Côte d’Ivoire’s GDP and 40 per cent of its exports, the country’s goal was to add more value to the raw materials and create more jobs in the process. To attract investors, the government introduced tax breaks for grinders and producers to achieve its goal.

Already, Côte d’Ivoire’s chocolate entrepreneurs have opened stores around the country hoping to tap into the windfall from the emerging local middle-class consumers.

Unlike Côte d’Ivoire, many cocoa-producing countries across Africa are still reliant on exporting the raw cocoa at the expense of the value addition.

Africa’s cocoa-producing countries get only a negligible share of the global chocolate industry revenue. The International Cocoa Organization (ICCO) notes that in 2017, Côte d’Ivoire produced 2.1 million tonnes of cocoa accounting for 44 per cent of the global output but the country made just US$3.3billion (€2.9bn) from the trade. This was in comparison to the US$22 billion US chocolate majors netted from the product.

This is the reason why a cocoa revolution in West Africa is welcome since for years the farmers who have been raking billions for cocoa moguls have in return been receiving trifling amounts for their hard labour.

Valued at more than US$80 billion a year, the chocolate industry has seen several cocoa farmers in parts of West Africa become poorer now than they were in the 1970s and the 1980s.

Following the pricing mechanism by Côte d’Ivoire’s Coffee and Cocoa Board (CCC) and the Ghana Cocoa Board (COCOBOD), the global prices were negatively impacted and the two countries successfully managed to have the chocolate traders and makers agree to the idea of the US$400 a tonne premium on all cocoa sales contracts in less than a month.

The pricing mechanism was imposed to help producers earn a living wage and the suspension of forward sales of cocoa beans until the prices were agreed to have proven to be a success.

This success means that Africa can take a stand and win against global players bent on exploiting the continent’s resources in return for a paltry sum.

Already, the two countries are planning to build storehouses for cocoa harvests to be stockpiled until their sale dates.

To add value to its cocoa, Côte d’Ivoire’s CCC is planning to build two primary processing facilities with the goal of achieving a grinding capacity of one million tonnes in comparison to the 500,000 tonnes capacity currently.

Its partner, Ghana, has increased its capacity from 250,000 to 400,000 tonnes. However, Ghana lacks secondary processing (cocoa paste manufacturing), where 80 per cent of cocoa market revenue is generated. This means that the country has to invest in the sector to catch up with its partner as they seek to be formidable cocoa giants in the world.