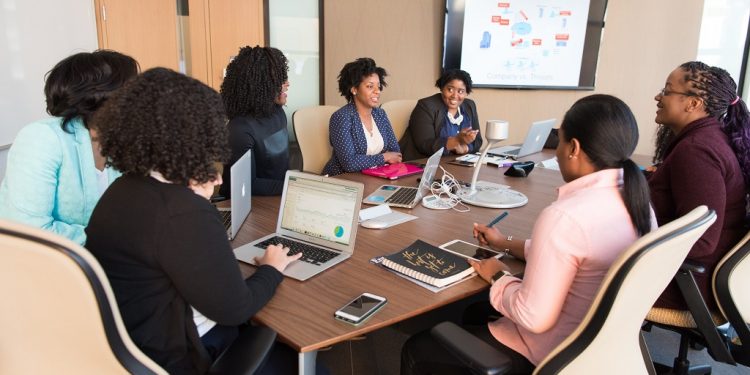 Women entrepreneurs. Small scale entrepreneurs and businesses form the backbone of most economic activity across the continent. [Photo/Pexels]

by Njenga Hakeenah
in Agribusiness, Countries, Entrepreneurship
0
Share on FacebookShare on LinkedIn

Women are helping to run Kenya’s economy by controlling half the 1.3 million MSMEs in the East African investment hub.

According to the Kenya Bureau of Statistics, Kenya’s women contribute to 46.5 per cent of the labour force in a country where the poverty rate is at 34.8 per cent.

The country scored 0.719 out if the highest possible score of 1 at the Global Gender Gap Index 2015 of the World Economic Forum. Kenya was at position 48 out of 145 countries.

To maintain the momentum, AfDB has been partnering with Entreprenarium to educate women on entrepreneurship, business development and financial management.

Last week, the third round of two-week masterclasses organized by the Bank in partnership with Entreprenarium concluded where two hundred Kenyan women entrepreneurs, who pre-qualified through an online process, were selected to attend the masterclasses.

The programme is under the Bank’s flagship Affirmative Finance Action for Women in Africa (AFAWA) programme.

It was launched in May 2016 in Lusaka, Zambia with an overarching objective of bridging the finance gap for women in Africa and unlocking their entrepreneurial capacity.

The pan-African initiative advocates for strengthening access to financing for women-owned and women-led businesses, building the capacity of women entrepreneurs and financial institutions and engaging with and supporting African governments to ensure legal, policy and regulatory reforms required to accelerate women’s entrepreneurship.

Entreprenarium specializes in providing business support and access to finance for women and young entrepreneurs across Africa.

The pan-African foundation that invests philanthropic capital in the training and financing of women and young entrepreneurs has trained over 2,000 entrepreneurs since 2014 spending USD 2.1 million initial capital invested in technical assistance and funding of 52 projects.

The training is part of the Bank’s drive to support over 1,000 women entrepreneurs in Cote d’Ivoire, Gabon, Kenya, South Africa and Tunisia.

In West and Central Africa, training sessions in Abidjan, Cote d’Ivoire and Libreville, Gabon were held in December 2018, and applications for financing are currently under review to support the most promising projects.”

“This initiative is critical in that it will strengthen women’s entrepreneurship in Africa by unlocking networking, coaching and mentoring opportunities for women-owned or -led small and medium-sized enterprises,” said Gabriel Negatu, the AfDB’s Director General for the East Africa region.

The Bank’s Country Gender Note for Kenya, produced in 2017, highlights that Kenya has the highest rate of female participation in enterprise ownership in East Africa, at 48.7 per cent.

Women own half the 1.3 million MSMEs in Kenya

Women own almost half of the 1.3 million micro-small-and medium-size enterprises (MSMEs) in Kenya.

According to the Kenya National Bureau of Statistics (KEBS), 85 per cent of the female-owned MSMEs is in the informal sector.

Women constitute a major force In the agricultural sector, managing more than 40 per cent of all smallholder farms in the country.

Despite the numbers, women entrepreneurs still face major constraints limiting their access to finance, including lack of access to resources and some socio-cultural norms.

The main source of capital for businesses remains family or own funds, according to the statistics by KEBS.

“Women entrepreneurs in Kenya represent an important part of the country’s business owners, yet most of them are doing it in an informal way. That is why we developed this programme which contributes to building their financial autonomy in a sustainable way,” said Frédéric Ngirabacu, Entreprenarium’s Chief Operating Officer.

In addition to implementing its AFAWA programme, the Bank’s support for women entrepreneurs includes initiatives such as recognizing the role women play in agriculture and funding the “50 Million Women Speak” and Fashionomics networking platforms.

You can also read why DR Congo is mulling joining the EAC and Invest In Africa roots for more support to bridge SME financing gap as the stage is set for the ‘Women in Tech’ programme and UNCTAD highlights on gender gaps in EAC trade.