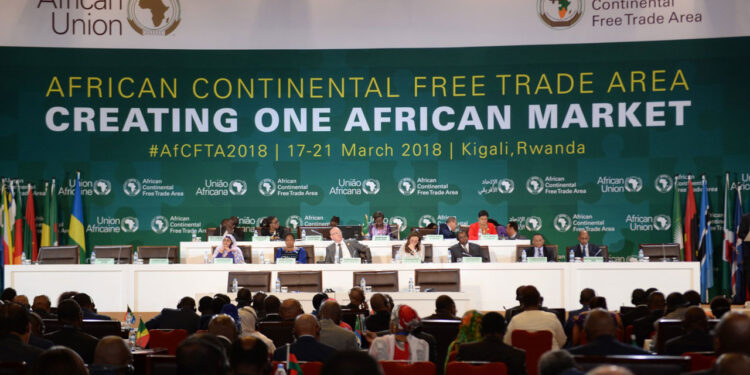 African leaders when they met to deliberate on the AfCFTA ooerationalistaion in 2018. [Photo/AfCTA Secretariat]

Africa: The pros and cons of the world’s largest free trade area

Over the next few years, the AfCFTA is expected to amass a combined gross domestic product of around US$3.4 trillion for the continent.

Second only to the World Trade Organisation (WTO) in terms of participating countries, the African Continental Free Trade Area (AfCFTA) is the largest single market ever created in the world.

It is now almost a year since the AfCFTA was operationalised in July 2021 and the ambitious trade union is starting to bear fruit. Over the next few years, the AfCFTA is expected to amass a combined gross domestic product of around US$3.4 trillion for the continent.

With 54 African countries on board, the AfCFTA connects almost 1.3 billion people building an unprecedented economic integration. In fact with the exception of Eritrea, all African countries have signed the deal.

Through the AfCFTA, African countries are to enjoy tariff reductions across the continent. Other than reduced tariffs, the members will also benefit from trade facilitation and favourable regulatory measures that will boost standards.

Officially, trading under the agreement was to begin on January 1, 2021, but it was pushed to July due to the pandemic. However, for the agreement to operate at full capacity, there is a host of issues to be ratified including negotiations on conditions for the trade of goods and services, the question of intellectual property rights as well as investment and competition policies and e-commerce perimeters.

When completed, it is expected that tariffs will be removed for up to 90% of goods for a span of five years but double that time will be extended for the continent’s least developed countries.

Prior to this, the world’s largest free trade pact, intra-African exports were 16.6% of total exports in 2017. By comparison, Europe enjoyed a whopping 68.1% while 59.4% of countries in Asia traded among each other while 55% of countries in the Americas traded within their continent.

This is why the AfCFTA is a necessity for Africa, to boost intra-African trade. Again, by comparison, while internal trade on the continent was only 16.6%, between 2000 and 2017, Africa trade with the rest of the World was almost 80% to 90%.

As per World Bank estimates, come 2035, Africa will start to enjoy real income gains from the agreement at almost $450bn worth of trading.

By that time, intra-continental exports are expected to increase by more than 81%, while exports to non-African countries would rise another 19%.

Should all things go to plan, the World Bank is of the view that Africa’s free trade pact will uplift some 30m people from extreme poverty and another 68m people from moderate poverty.

The AfCFTA is also meant to ease the free movement of labour. However, owing to varying levels of development and human resource capacity i.e. number of skilled labour in a given country, several African nations are against the Free Movement of Persons.

That being said, at least 30 nations are for the protocol which establishes a visa-free zone within the AfCFTA. As you can imagine, more developed countries like Nigeria and South Africa are not for the Visa Free movement of persons for the obvious risk of flocking of people from poorer nations.

One of the major criticisms raised against his ambitious continent-wide free trade pact is the fact that it is bound to have disproportionate benefits for different countries.  There are already pre-existing inequalities that favour more developed countries.

Bluntly speaking, it is to be reasonably expected that it is the continent’s tycoons, large business owners that will benefit the most.

Consider this, only three of the agreement’s members i.e. Nigeria, South Africa and Egypt account for almost half (50%) of all of Africa’s GDP. Take for instance the fact that in 2020 alone, the continent of Africa as a whole, imported US$20 billion worth of goods from South Africa.

With the tariff-free movement of goods, South Africa will enjoy a tremendous increase in trade output to the rest of the continent at much lower costs.

Then there is the question of fair trade, how will Africa’s SMEs fair when put head to head with the continent’s largest conglomerates. Will they be able to compete? As the economies of scale would have it, large manufacturing companies will have the advantage because they are more competitive.

Large firms will be able not only to produce at a marginal cost but also be able to transport more affordably across the continent. While on the other hand, SMEs will increasingly find it harder to meet the AfCFTA’s rules of origin requirements.

Given the fact that economic power can be linked to political power, then this means that the wealthy few will also have the capacity to lobby for favourable policies. This fact also poses a security risk as a handful will influence politics.

It is hoped that measures such as delaying full trade liberalization to protect less developed economies will offer some protection to the vulnerable groups. Individual countries must lobby for favourable implementation strategies that will protect them from the said threats.

There is also the option for large firms to integrate with SMEs to increase their distribution capacity. Governments must also consider the need to lower financing barriers so as to allow smaller investors to enter into key manufacturing areas, especially in agricultural value chains.