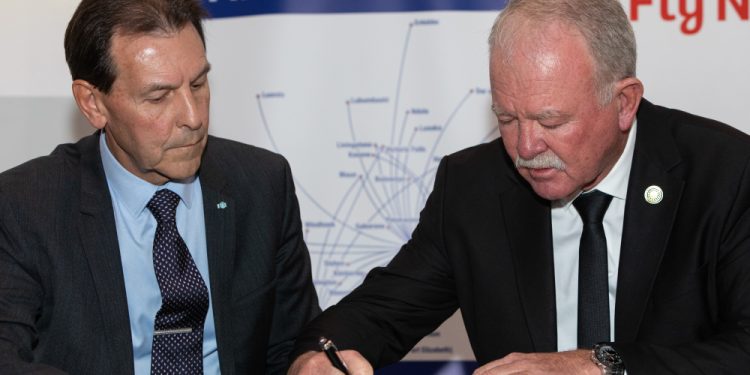 FlyNamibia is the scheduled airline division of Westair Aviation established in 1967 initially as an aircraft maintenance facility, but which evolved into Namibia’s most experienced aviation company. It began scheduled passenger operations in June 2019 after the Namibian Transport Commission granted it carrier status.

The acquisition is for an undisclosed amount in a strategic equity partnership punted to fill the short- and medium-haul regional market gap left by the collapse of Air Namibia. This is also expected to accelerate Namibia’s post-pandemic recovery and drive the expansion of efficient scheduled airline services to, from and within Namibia.

“Airlink sees the benefit in establishing a sustainable common branded network air transport system throughout the region. It has been discussed in many forums that the way to achieve this is through collaborative partnerships between the more established airlines and smaller carriers that deliver scale and the associated efficiencies that lead to robustness. We believe this relationship will spawn others within the region,” he said.

“Namibia is unique, not only in its natural, mineral, and human wealth but its relatively small population relative to the size of its territory. With this in mind, we will be well-placed to achieve the economies of scale to make it economically feasible to connect and serve Namibia’s smaller towns and cities with Windhoek and other regional destinations while providing convenient and easy access to other markets around the world. This will also support our and Namibia’s shared longer-term ambition to establish Windhoek as a central connecting hub and base. In doing so, we will help to make air travel and transport more efficient and enhance Namibia’s competitive position as a destination for trade and tourism,” Foster added.

FlyNamibia newly-appointed Managing Director, André Compion added, “Namibia’s economy is expanding and has the potential to grow rapidly with new offshore drilling and mining, the resurgence in tourism, and its establishment as a pioneering producer of green hydrogen for the global energy market. To realise its full economic potential, Namibia will depend increasingly upon air connectivity to move people and goods between markets. By joining hands with Airlink and becoming part of its global network, we will be even better able to serve foreign and local tourists and businesses. In addition, we will be building capacity, developing aviation skills and creating direct and indirect job opportunities.”

FlyNamibia will adopt Airlink’s “4Z” International Air Transport Association (IATA) designator for its ticket sales and scheduled flights under a commercial franchise agreement. Although it will continue to operate under its own commercial risk.

Namibia’s only scheduled carrier will retain its own corporate identity, brand, and aircraft livery.

According to an announcement made at a news conference in Windhoek on September 28, 2022. FlyNamibia’s inventory will be promoted on Airlink’s reservation system and through its international codeshare partnerships and the changes will come into effect as soon as practicable.

Airlink and FlyNamibia will also optimise their schedules to provide the most convenient connections between their respective flights and with long-haul intercontinental flights provided by Airlink’s other commercial partners, which include more than 20 of the world’s leading global airlines.

FlyNamibia has set its eyes on expanding as far as Ghana in West Africa, Kenya and Malawi in East Africa, and the Democratic Republic of Congo (DRC) in Central Africa. Airlink already has an extensive regional network of more than 45 destinations in 13 countries throughout Southern Africa, Madagascar (currently suspended due to COVID-linked travel restrictions), and St. Helena Island.

Namibia’s airports facilitated 1.16 million local and international passengers in the 2019-20 financial year with air travel accounting for 683,551 (42.8 per cent) of its tourist arrivals.

Namibia draws the biggest percentage of tourist arrivals from SADC countries (Angola, South Africa, Zambia, Zimbabwe, and Botswana), and the African and China markets both saw growth in 2019. Europe and North America observed a decrease in tourist arrivals. According to the Ministry of Environment, Forestry and Tourism, the decrease from North America can be attributed to the Millennium Challenge Account (MCA-N) ending in 2014, and no new aggressive marketing effort continued for that specific market. The decrease recorded in the European market could be that the source markets had reached their peak, leaving Namibia Tourism Board (NTB) to venture into new potential markets such Asia and Middle Eastern countries.

Southern Africa’s airline market continues to shift as the region emerges from the pandemic.

Read: Namibia and Botswana remove a barrier to freedom of movement, abolish the use of passports