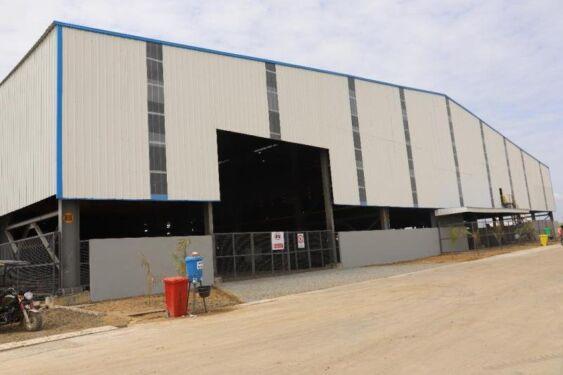 by Mustapha Juma
in Industry and Trade
0
Share on FacebookShare on LinkedIn
Ghana President Nana Addo Dankwa Akufo-Addo has commissioned an $80 million steel manufacturing company in Ghana.
The company which will be operating under the government’s One District One Factory (1D1F) initiative was inaugurated on Tuesday, April 13, 2021. This is the first phase of the steel company, which is owned by B5 Plus Steel.
Speaking at the inauguration ceremony, President Nana Akufo-Addo said that the commissioning of the plant was a concrete manifestation that the new paradigm of economic development, which his administration has been vigorously pursuing since 2017, of insisting on value-addition industrial activities within a conducive and business-friendly environment, is making headway.
He reiterated his administration’s continued commitment to providing strategic support to companies and enterprises operating in Ghana.
The president also took to his social media handles to post the news about the project.

“On Tuesday, 13th April 2021, I commissioned Phase One of the B5 Plus Steel Plant, an enterprise operating under Government’s One-District-One-Factory (1D1F) initiative.

“This plant is a concrete manifestation that the new paradigm of economic development, which this administration has been vigorously pursuing since 2017, of insisting on value-addition industrial activities within a conducive and business-friendly environment, is making headway,”  President Nana Addo Dankwa Akufo-Addo posted on Facebook.

On his part, the Trade and Industry Minister, Alan Kyeremanten said the country’s industrial transformation axes on a competitive and vibrant local steel industry.

According to him, the steel industry is classified as one of the strategic anchor initiatives being promoted by the government as part of the Industrial Transformation Plan.

The state of art steel manufacturing plant in Larkpleku Village, Prampram, is estimated to have cost $100million and the expanded B5 Plus has the potential to help bridge the gap between the production and demand for steel locally.

According to the set arrangements, the plant will have an uninterrupted power supply. To ensure that this is achieved, the management of B5 Plus has entered into a special arrangement with VRA and GRIDCO.

The trade minister further noted that this is timely to ensure the efficient running of the facility.

Headquartered in Ghana, B5 Plus Ltd was founded in 2002 by its CEO Mukesh V. Thakwani with a conglomerate of business operations spread across different countries in West Africa.

B5 Plus Ltd’s vision is to become the World’s most renowned manufacturing and trading company in iron and steel products.

With an initial installed capacity of 250,000 tonnes per annum, the plant, West Africa’s biggest fabrication plant, and the third biggest in Africa will manufacture iron rods, wire rods, round bars and general steel products for both the Ghanaian and West African markets.

The President noted that with as many as 350,000 graduates and thousands of apprentices and other non-graduates joining the labour market yearly in search of jobs, value addition and a vigorous industrial agenda presented a more sustainable way of providing the needed jobs to curb the growing unemployment in the country.

“I came into office in 2017, with a clear appreciation of the fact that unless we industrialize, that without the goal of adding value to our primary product, we cannot create the necessary numbers of high-paying jobs that will address this great problem of unemployment, as well as enhance living standards of the mass of our people. That is why the government took steps to roll out the One District, One Factory initiative,” President Nana Akufo-Addo said.

Disclosing that the 76 factories operating under the One District, One factory initiative presently employing some 139,000 people, President Akufo-Addo was optimistic that when all the projects under the flagship programme came on stream, some 285,000 more Ghanaians would get direct jobs.
He restated government’s commitment to enhancing the existing business operating environment to provide incentives to strategic investments being made by companies to advance Ghana’s transformation agenda.
Tags: B5 Plus SteelGhanaOne-District-One-Factory (1D1F) initiativePresident Nana Addo Dankwa Akufo-Addosteal manufacturing company