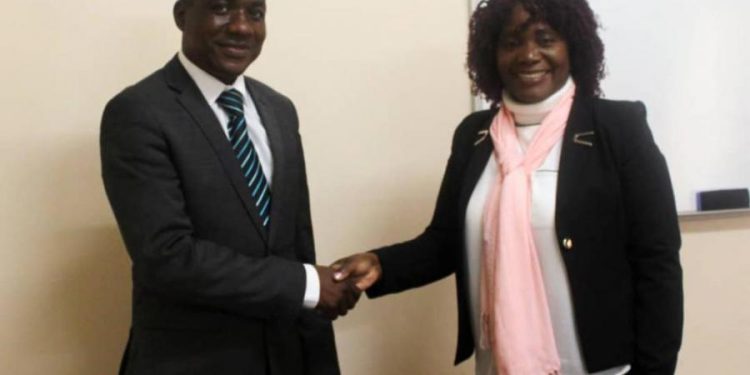 Chargé d'Affaires a.i. from the Embassy of Cuba in Zimbabwe, Counsellor Yoisy Ford García in the company of Mr. Lovemore Gwati, member of the Zimbabwe-Cuba Friendship Association, paid a visit to the Bindura University of Science Education (Photo/ Misiones.cubaminrex.cu)

Cuba to send teachers and lecturers to Zimbabwe

Despite a protracted economic crisis that has decimated Zimbabwe’s social services and infrastructure, its education has retained its ranking among the best in Africa.

Cuba will this year send teachers and lecturers to Zimbabwe as part of enhancing bilateral cooperation in the education sector. The teachers and lecturers, whose number is yet to be confirmed, are expected in the country by August. The remarks were made by the Chargé d’Affaires from the Embassy of Cuba in Zimbabwe, Counsellor Yoisy Ford García in the context of Africa´s Day. The visit was the culmination of different activities organized by the Cuban Embassy to commemorate the 42nd anniversary of diplomatic relations between the two countries.

“Both countries have strategic and historical cooperation with a strong will to share expertise in new sectors and fields. Cuba and Zimbabwe have always had a vibrant relationship, which is written on stone, and together we have worked on the international arena,” she said.

She was in the company of Mr. Lovemore Gwati, a member of the Zimbabwe-Cuba Friendship Association, during a visit to the Bindura University of Science Education (BUSE). Bindura University in Mashonaland Central is the fruit of bilateral cooperation between the two countries. The Cuban representative was received by the Vice-Chancellor of the University, Professor Eddie Mwenje, and other members of the institution’s management.

“The university has attained its stature through the involvement of Cuba and we have become a university of choice through that cooperation. The very establishment of the university was also done with the assistance of Cubans,” he said.

Mrs. Garcia said Cuba is willing to develop human capital in Zimbabwe, especially in the education sector as this is in tandem with Zimbabwe’s National Development Strategy 1 (NDS1).

“This friendly relationship had been in existence way before the Independence of Zimbabwe and since that time both countries enjoy an excellent relationship. We consider that it is never too late to memorize this special event,” she said.

According to an article by Cuba’s Representative Office Abroad published on May 24, 2022, Cuba began cooperation in the educational sector with Zimbabwe after its independence in 1980. The first group of young Zimbabweans left for Havana in 1985 to study science careers. The Southern African country needed technicians and professionals to achieve the desired socio-economic and political development in the initial moments of its independence, for which teachers and health professionals were trained.

More than 3 000 Zimbabwean professionals have graduated from Cuban universities and are applying the knowledge and skills acquired in their home country.

As far as May 1, 2017, the Herald published an article where former Higher and Tertiary Education, Science and Technology Development Minister Professor Jonathan Moyo met his Cuban counterpart, Cde Jose Saborido Loidi to share revolutionary ideas on how science can rebuild Zimbabwe through university research. The meeting was meant to build and cement bilateral relations between the two countries in the education sector.

According to an article published by Sowetan Live on July 6, 2021, an organization representing parents of schoolchildren slammed the Government of South Africa for hiring Cuban educational specialists to beef up the skills of local maths and science teachers.

The National Association of School Governing Bodies’ general secretary, Matakanye Matakanye, told SowetanLIVE during an interview that many teachers were unemployed and the government should prioritize them over foreign teachers.

Matakanye also accused the government of failing to create a strong local capacity for specialist teachers.

“There are lots and lots of university graduates who are not working and we don’t get the department’s logic of taking people from outside our country when our people are not working. If this was happening five or 10 years after democracy, it would be understandable. It is unacceptable that the department of basic education is still getting educators from Cuba and Zimbabwe after 26 years of democracy,” he said.

Meanwhile, according to the Rwanda Education Board (REB), Rwanda is set to receive close to 500 Zimbabwean teachers by September this year. The teachers will be placed in polytechnics and higher learning institutions.

REB Director General Nelson Mbarushimana announced the development in his remarks at the ongoing Zimbabwe-Rwanda Trade and Investment Conference in Harare. The conference was organized through a partnership between ZimTrade, the Zimbabwean Trade Development and Promotion Organization, and Rwanda Development Board (RDB).

Two months after Kagame’s request, a memorandum of understanding was signed between both countries, whose results have been pending since December last year.

“On the MoU signed last year for an exchange of education personnel from Zimbabwe, we have so far started recruiting and we will have 477 teachers coming from Zimbabwe in September this year,” said Mbarushimana.

“We have set up a recruitment committee specifically for this and the process is being done online,” Mbarushimana said.

Zimbabwean President Emmerson Dambudzo Mnangagwa stressed that the current trade and investment partnership between Rwanda and Zimbabwe must yield increased trade volume between both countries.

“The conference gives impetus to our quest to strengthen our commercial ties and accelerate the implementation of mutual programmes and projects towards improving the standards and quality of life of the people of Rwanda and Zimbabwe,” President Mnangagwa told both delegations.