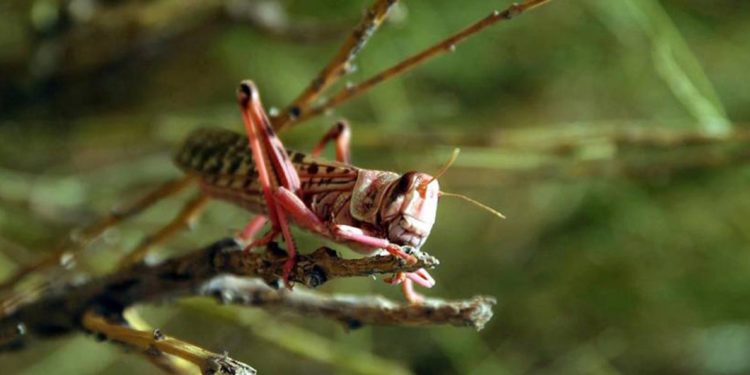 Desert locusts , if not contained pose a threat to EAC’s food security – FAO

The locusts’ outbreak is therefore impacting the region’s food insecurity as they are destroying hundreds of thousands of acres of crops in their way.

Food and Agriculture Organization (FAO) have warned that the current desert locust swarms infestation could spill over into more countries in East Africa.

Currently, Ethiopia, Kenya and Somalia are dealing with desert locust swarms of “unprecedented size and destructive potential” that FAO warns could spill over into more countries in East Africa.

The locusts’ outbreak is therefore impacting the region’s food insecurity as they are destroying hundreds of thousands of acres of crops in their way.

The UN agency urged for a collective campaign to deal with the crisis, concerned over the risk that the swarms spill over into more countries in East Africa, “if efforts to deal with the voracious pest are not scaled up across the region”.

An analysis from FAO outlines the current situation of the manifestation of the locusts in specific countries in East Africa.

Kenya has not faced a locust threat of this magnitude in 70 years, FAO warned.

Immature and maturing swarms continue to arrive in the northeast from Ethiopia and Somalia and are moving throughout northern areas in Mandera, Wajir and Marsabit counties and have reached central areas of Isiolo, Meru North and northern Laikipia.

Some swarms in the north have moved back into southern Ethiopia while others are now mature and laying eggs that will hatch after about two weeks, giving rise to hopper bands in February and March. Today, a swarm reached the southern Rift Valley near Kapedo on the border of Baringo and Turkana counties. Aerial and ground control operations are in progress in some areas. Further movements are expected, especially in Turkana and Marsabit counties.

Ground and aerial control operations continue against immature swarms in Somali and South Oromiya regions. Some swarms are maturing while others are moving south and west into the southern parts of the country with at least one swarm reaching the edge of the Rift Valley in Southern Nations Nationalities and People Region (SNNPR). Some 6 000 ha were treated by air so far this month.

There remains a high risk of a few swarms appearing at any time in the southeast (Kapoeta East and Ilemi Triangle) coming from adjacent areas of NW Kenya, flying north through the Rift Valley or northwest from Marsabit county. They may transit through the area to the Rift Valley in southwest Ethiopia.

There remains a moderate risk of a few swarms appearing at any time in the northeast from adjacent areas of NW Kenya until about the end of January.

According to the UN agency, as favourable breeding conditions continue, the increase in locust swarms could last until June. And left unchecked, the numbers of crop-devouring insects could grow 500 fold by then.

In a press release issued on 6th January, FAO Director-General QU Dongyu said the agency is activating fast-track mechanisms to support governments, warning that the situation is now of “international dimensions”.

“Authorities in the region have already jump-started control activities, but in view of the scale and urgency of the threat, additional financial backing from the international donor community is needed so they can access the tools and resources required to get the job done,” Mr. Qu said.

Swarms potentially containing hundreds of millions of individual desert locusts can move 150 kilometres a day – devastating rural livelihoods. According to the UN agency, “given the scale of the current swarms, aerial control is the only effective means to reduce the locust numbers”.

Speaking at a separate press conference on the locusts menace in the country, the CEO of the Agrochemicals Association of Kenya Mr Eric Kimunguyi said that Agriculture is the core of our economy and containing the locusts before they spread further will save the country a lot of losses.

FAO is assisting with forecasts, early warning and alerts on the timing, scale and location of invasions and breeding.

The UN is seeking $70 million to urgently support both pest control and livelihood protection operations in the three most affected countries.