by Indicator
in Agribusiness, Industry and Trade
0 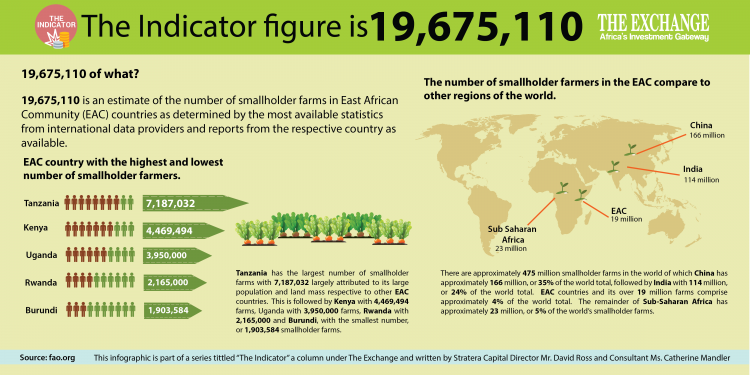 19,675,110 is an estimate of the number of smallholder farms in East African Community (EAC) countries as determined by the most available statistics from international data providers and reports from the respective country as available.

According to the Food and Agriculture Organization (FAO) of the United Nations, a smallholder farm is one that produces crops with less than approximately 2 hectares equivalent to a land mass the size of 100 meters by 200 meters.  Smallholder farms are typically are owned or managed by a single family or extended family.  Other definitions of smallholder farms in East Africa include titles as unregistered farms in Tanzania or household farms in Uganda and Rwanda.

Which EAC country has the highest and lowest number of smallholder farmers?

How does the number of smallholder farmers in the EAC compare to other regions of the world?

Is the number of smallholder farmers in the EAC increasing or decreasing?

It’s largely unclear.  Some reports suggest smallholder farms are decreasing in some countries and increasing in others.  From 1960 to 2000 there have been 15 Sub-Saharan African countries reporting a decrease in smallholder farms compared to 3 reporting an increase.  Decisions made in the current generations of East Africans will determine if farms are divided among family members or sold off and consolidated along with farms owned by other families, organizations, or corporations.

What impact do smallholder farmers have on the economy of the EAC?

What is being done to better serve the needs of smallholder farmers?

The governments of EAC countries, a multitude of development partners, NGOs, donors, established private sector businesses, and startup businesses are all seeking to improve the needs of smallholder farmers.   A few larger programs and initiatives include the following:

The FAO has developed its East Africa Resilience Strategy for 2018-2022 to contribute to enhanced food security and nutrition – http://www.fao.org/resilience/resources/resources-detail/en/c/1174823/

USAID has developed a program called Feed the Future which seeks to work with countries in the EAC and others to develop agricultural sectors with a particular focus on smallholder farmers – https://www.feedthefuture.gov/

What investment opportunities are growing with this phenomenon?

David L. Ross is the Managing Director at Statera Capital, Distinguished Professor of Practice at Carnegie Mellon University-Africa, and US Ambassador to the Open University of Tanzania.  David is active in growing companies in Eastern and Southern Africa through angel investment, investment advisory, strategic partnerships, and executive education. Connect on LinkedIn at http://tz.linkedin.com/in/davidlross1 or at [email protected] .

Catherine Mandler is a Consultant at Statera Capital. Connect on LinkedIn at http://www.linkedin.com/in/CatherineMandler or at [email protected] . 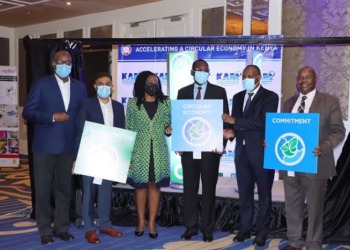