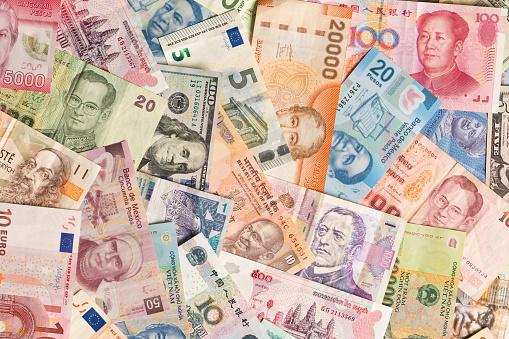 A colorful variation and collection of international currency, a global business money exchange and finance. Photographed in studio, at high angle in horizontal format.

Foreign currency auction system after introduction with much fanfare is failing to live up to its purpose.

The foreign currency auction which was put in place by the Reserve Bank of Zimbabwe as a mechanism for allocating scarce foreign exchange in the southern African country has missed a deadline issued by the country’s president Emmerson Mnangagwa.

The backlog according to the central bank runs into the tens of millions and it said it was working “frantically” to clear it. The central bank governor described the persistent backlog as a moving target and the recent miss of the deadline was not the first time. The foreign currency auction system was introduced in 2020. The rationale for the auction system was that it would help in the discovery of the exchange rate. At its inception, the central bank surmised that the introduction of the auction was meant to bring transparency and efficiency in the trading of foreign currency in the economy.

Unfortunately given recent events and the track record of the auction so far, it would be remiss to describe the auction as a success. The auction has from its inception been plagued by deep-seated challenges. Zimbabwe has had biting shortages of foreign exchange even after the inception of the auction system. Most of the foreign currency in the country is traded on the parallel market. Zimbabwe’s economic landscape is also unique in that the country has a large informal economy.

This informal economy trades predominantly in hard currency whereas the formal economy trades mostly in the Zimbabwe dollar. The biggest headache for monetary authorities is the excessive reliance of the country on imports for all of its needs. This reliance on imports causes households, firms, and other economic agents to place a premium on hard currency and demonstrate a preference for it above the local currency.

The local currency is not tradeable outside of the country’s border. This fact coupled with the foregoing has served to undermine the local currency. Zimbabweans also have had a tumultuous history with their currency which became defunct in 2009 when hyperinflation rendered it useless and the government instituted what was then known as the multicurrency system. The introduction of a local currency as far back as 2016 was a hard sell because households and firms resisted with the memories of hyperinflation still fresh in their minds.

The authorities for their part are puzzled at this preference for hard currency over the local currency unit. The first thing that the monetary authorities point to whenever they defend the continued use of the Zimbabwe dollar is that the country has for the first time in recent memory some foreign exchange reserves in the form of the US$1 billion in special drawing rights granted to it by the International Monetary Fund last year as part of the multilateral financial institution’s efforts to provide a stimulus for economies to mitigate and reverse the effects of the COVID pandemic.

Zimbabwe despite the foreign exchange shortages has bank deposits in hard currency reportedly to be in the region of US$ 1.7 billion. The central bank governor last year lamented the fact that despite there being a stockpile of foreign currency deposits banks were wary of lending it.

The reasoning of the central bank boss was that the US$1.7 billion would easily expunge the foreign currency auction backlog which last year was reported to be in the region of US$ 170 million. The finance minister also defends the Zimbabwe dollar by referencing the country’s foreign exchange reserves but goes even further to point out that the country in 2021 reported a balance of payment surplus which was the largest since 2013.

Due to the heavy reliance on imports, the volatility in the foreign exchange rates has served to stoke inflationary pressures which the most vulnerable members of society bear the greatest brunt. In the unfortunate case of Zimbabwe, the country cannot afford additional volatility in its economy from the poor management of foreign exchange and the economy in general. Global geopolitics and disrupted supply chains have placed inflationary pressure on the global economy. Zimbabwe can scarcely afford a situation where its local economy already besieged by inflation of its own making is further buffeted by inflationary pressure from the global economy.

This current backlog is estimated by the Central Bank to be in the region of US$ 135 million. One of the reasons that the foreign currency auction system is not sustainable is its funding model.

The foreign currency auction system is funded not from treasury allocations from the ministry of finance or from external lines of credit from external creditors or financiers. The auction system is funded by other businesses which would have surrendered a portion of their foreign exchange receipts to the central bank. This method of funding for the auction system is not sustainable because those that provide the hard currency can scarcely afford to do so themselves. One of the largest exporters in Zimbabwe, crocodile skins producer and gold miner Padenga Holdings Limited complained in its annual report that it lost at least US$ 9 million from the mandatory foreign currency surrender requirements.

For the foreign currency auction system to work it needs to fund through a viable and sustainable financing model. The surrender requirements act as a tax on the earnings of foreign currency earners and in the long run, will curtail their ability to generate further foreign exchange earnings. The monetary authorities will be well advised to look for alternative methods of funding the backlog.

Last year the central bank seeing the reluctance banks had in plugging the gap, intervened by crafting measures to coax the banks to fund the deficit. However, banks being rational entities will not lend if the prospect of the repayment of loans is remote. The government is unfortunately limited in terms of alternate avenues of funding for the auction because of its poor credit standing and history. This scenario leaves only one option which will be the issuance of United States dollar-denominated treasury bills which will be prescribed to the banks.

The failure of the auction system also brings to the fore the question of whether Zimbabwe needs to continue with its local currency unit which economic agents no longer have any faith or confidence in. The dollarization of the Zimbabwean economy is inevitable. Interventions by the government on the contrary are only delaying the inevitable.