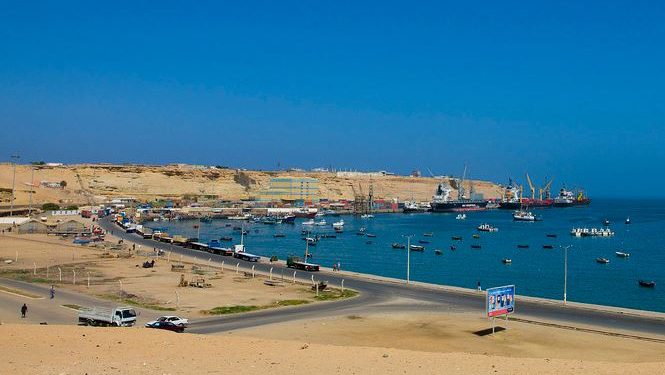 by Kimani Chege
in Africa's Development, Infrastructure
0
Share on FacebookShare on LinkedIn

With 70 billion (US$600 million ) yen to be used to rehabilitate the Namibe bay, Toyota Tsusho’s first port development project in Angola shows Japanese interest in an area dominated by China

Toyota Tsusho Corporation has signed a contract with the Ministry of Transports of the Republic of Angola for the comprehensive development of Namibe Bay, Angolan Southern province which for decades lay in ruins following a protracted civil war.

This will be Toyota Tsusho’s first port development project in Angola. The contract amount is approximately 70 billion yen (US$600 million ); part of the value is scheduled to be financed by the Japan Bank for International Cooperation (JBIC) and private financial institutions which will include Export Credit Line from the Nippon Export and Investment Insurance (NEXI).

Construction work on the bay is expected to be completed approximately three years after the effective date of the contract.

Angolan President, João Lourenço, has already signed the contract ordering the ministry of transport to facilitate the Japanese company to conduct the said work.

Angola’s recovery after decades of war

Angola’s economic revitalization has continued after the conclusion of the civil war, which lasted from the country’s independence in 1975 to 2002.

Although economic growth has slowed down as a result of falling crude oil price, Angola is a country with great economic potential; it produces an abundance of oil, while diamonds, marble, and other high-value materials are also explored and mined there.

Although Angola is–after Nigeria–one of Africa’s largest oil-producers, the country is seeking to diversify its industries in order to prevent its economy being influenced by crude oil prices.

The entry of Japan signals a new fresh of ideas after a decade of massive Chinese influence in infrastructural development as well as in the oil mining industry.

China has been involved in several projects including port, railways as well as roads, which has often left Japan out of these projects.

The comprehensive development project comprises two parts: first, the rehabilitation of the Saco Mar iron ore export terminal; and, second, the expansion of the Namibe container terminal, which is located on the opposite shore to Saco Mar.

Sacomar Port was opened in 1967 to export iron ore from Kassinga Mine in the south of the country. However, the port operation was discontinued due to the civil war, and the port remained as devastated after the long civil war ended.

The Angolan government is planning to reopen Kassinga Mine and this has necessitated the rehabilitation of Sacomar Port. The reopening of iron ore mines and the resumption of exporting of iron ore will be an effective solution for a challenge of crude oil dependent economy.

Namibe port is one of Angola’s most important ports. It is very close to a terminus of the Moçâmedes Railway, which transports import and export products to and from inland states in the south of Angola.

While Namibe port is the third largest port in Angola in terms of cargo handling volumes, it has no ancillary quay facilities for container transportation; in addition, since the quay water depth is shallow, Namibe port is only able to receive small-scale container ships.

As a result, Angola is forced to rely on Walvis Bay in neighboring Namibia for part of its imports. Expanding Namibe port will not only generate employment and increase revenues at the port itself, but also enable Angola to free itself from dependency on Namibia for imports. This is expected to lead to reductions in both transportation costs and period and thereby stimulate the economy.

Also read how DR Congo is contemplating joining the EAC

Investing in Tanzania? Here's what you need to know