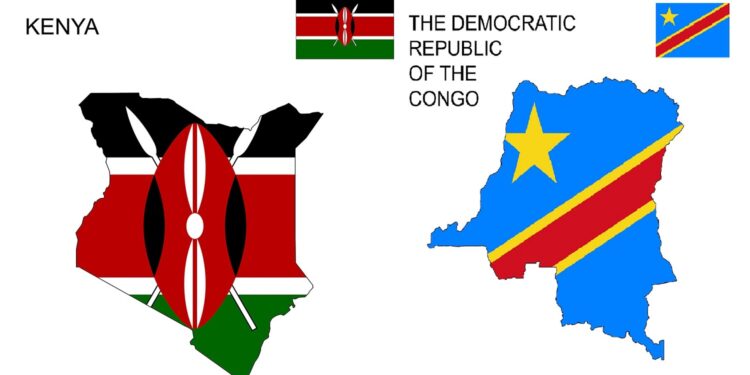 Kenyan investors are targeting the DRC economic zones to tap into the multibillion opportunities available. [Photo/Mappr.co]

The consumer market exceeds 30 million people in the region with opportunities in electricity and gas supply, real estate, telecoms and road maintenance in North and South Kivu.

by Joseph Kangethe
in Countries, Industry and Trade
0
Share on FacebookShare on LinkedIn

The Democratic Republic of Congo (DRC) is planning to set up economic zones in the province of Northern Kivu in a move aimed at attracting investors into the region.

Speaking at the Kenya DRC Trade mission in Goma, Lieutenant General Constant Kongba Nduta, North Kivu governor, said that the region was creating a friendly work environment that will enable the thriving of the private sector.

He added that the North Kivu province had exceptional economic areas in its territories under the industrialisation policy.

Nduta praised the trade mission organised by the DRC and Kenya governments together with Equity Bank as an important platform that promises a brighter future to investors as the country seeks direct foreign investments.

The governor concluded that the consumer market exceeded 30 million people in the region, quoting opportunities in electricity and gas supply, real estate, telecoms and road maintenance in North and South Kivu.  He gave credit to Kenyan delegates who confirmed their conviction and resilience in investing in Kivu.

James Mwangi, Equity Group Managing Director and CEO, said the bank had US$5 million allocated for entrepreneurs ready to invest in manufacturing, tourism and several other sectors in the region.

He said that the aim of the mission was to unite people in both countries adding that the best collaborators in the business community were those that took risks, made mistakes and eventually created wealth.

Mwangi insisted on Equity’s readiness to sponsor 20 DRC farmers to witness rice production in Mwea, Kenya reiterating that Kenya farmers would also go to DRC to witness cocoa-growing; to eventually eradicate exportation to Europe for chocolate processing which could be done in Goma.

He said that Kenya had included a commercial attaché in DRC with Kenya Airways leasing two planes to Air Congo. This would increase direct flights to Goma from two to three daily flights. He added that the Naivasha’s dry port would cut back the distance of transporting goods to Goma.

Speaking when the trade mission was launched in Kenya on November 1, 2021, Botuli Bosaw Geoffrey, the Second Secretary in the DRC Embassy in Kenya, said that the country has a population of more than 100 million potential consumers in addition to mineral riches, as well as a fertile agricultural area and the opportunity for political reform.

He said that when small businesses are empowered and encouraged for foreign investment in the country, the DRC will awaken an economic behemoth and enhance trade and investment inflows and outflows.

During their 15-day trade tour, the goal of the mission is to maximize the benefits of regional cooperation frameworks like the Africa Continental Free Trade Area (AfCFTA), leverage trade corridors, and establish regional supply chains.