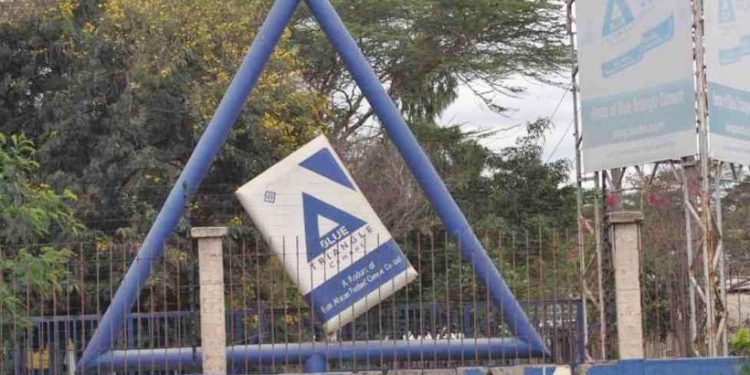 by Chacha Mwita
in Manufacturing
0
Share on FacebookShare on LinkedIn

Directors have pegged the dismal performance to a difficult business environment

East African Portland Cement Company(EAPCC) has reported a Sh1.3 billion loss in the six months period ended December 31, 2018, as the firm struggled with low revenues from its business.

Revenues at the Nairobi Securities Exchange(NSE) listed firm plunged to Sh1.4 billion in the period under review from Sh3.1 billion last year, a 54.8 per cent drop.

This came as losses from operating activities widened to Sh1.4 billion from Sh854.4 million, undermining the June 2018 full-year profit of Sh7.79 billion which it recorded after a Sh11.34 billion gain on land revaluation.

Directors at the firm have pegged the dismal performance to a difficult business environment on the backdrop of increased input prices, a sluggish market as well as production challenges arising from a tight EAPC PLC working capital position.”

“This affected the ability of the company to effectively provide the product sufficiently to all its customers. Consequently, sales revenue declined by 55 per cent  over the same period in the prior year leading to an increase of 66 per cent in loss from operating activities,” the company reported in its financials.

The management has however said the company expects to continue reaping from reductions in administrative expenses, driven by the ongoing staff rationalization and outsourcing of non – core administrative services.

The board says it is aggressively pursuing balance sheet restructuring to effectively address the negative working capital.

“Relevant consultations and approvals to recapitalize the business have been obtained,” the board of directors said in its statement through the NSE.

The management has expressed confidence in turning around the business saying the future market outlook remains positive with the unveiling of the Big Four Agenda by the National Government where affordable housing and manufacturing were among the top priorities.

The competitive environment is however expected to result in subdued cement prices in the near future.

“Revenue enhancement and cost optimization will therefore remain key focus objectives as the company continues to leverage on its brand to weather competitive pressure. Despite the depressed results, the board remains confident in realization of its turnaround efforts and takes cognizance of government support in concretizing initiatives in sourcing for working capital,” the directors said.

The company is further reorganizing its strategy and structure to reengineer the business in order to improve performance, cost rationalization and efficiency, it said.

This is geared towards reduction of the high finance and administrative costs and stabilization of the value chain processes, in order to enhance efficiency and ultimately the company’s competitive position.

“The board is optimistic that with the implementation of the company’s medium term plan, the company will return back to profitability,” the directors affirmed.

The directors do not recommend payment of an interim dividend.

How to tap into cross border opportunities