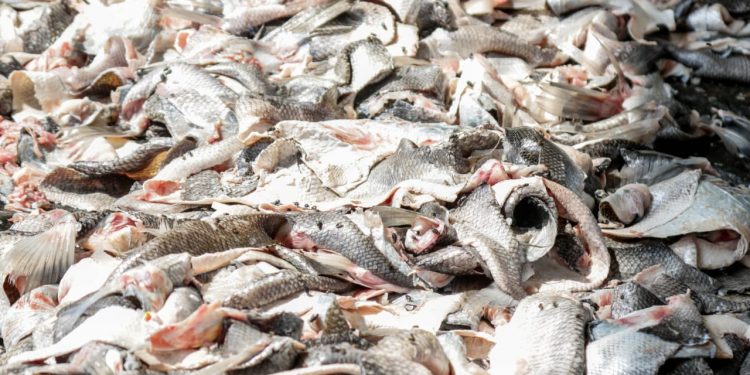 Turning trash into cash while tanning fish skin into leather

Fish skin leather, due to its naturally exotic appearance, provides an alternative to snake and alligator leather.

by Kawira Mutisya
in Manufacturing
0
Share on FacebookShare on LinkedIn

Just one day before Kenya announced its first coronavirus case on the 12th of March a company that specialises in the processing of quality fish leather, was incorporated in Kenya.

Kisumu’s fishing economy has been firmly established since the very beginning of the twentieth century when the railway from the coastal Kenyan town of Mombasa to the Ugandan capital Kampala, was completed. Running through Kisumu it enabled the transport of fresh catch to Nairobi markets making it the most important inland fishing town in Kenya.

“We use skin from Nile Perch, which largely populates the iconic Lake Victoria, chief reservoir of the Nile River,” says the company’s CEO and co-director, Antonio Raimondi, adding that Nile Perch skin is very malleable which makes its leather of high quality.

Raimondi has partnered with Newton Owino, a fisherman based in Kisumu to generate income by processing discarded fish skin at the shores of the lake.  “Mr. Owino noticed the waste lying around Lake Victoria shores and thought of coming up with a solution to transform the waste into something profitable,” he explains.

Fish skin leather, due to its naturally exotic appearance, provides an alternative to snake and alligator leather.

“Most among the species of snakes and alligators are listed as endangered, with their population decimated due to hunting for their skins. On the contrary, fish skin is obtained from the waste discarded by the filleting industries and fishing of the Nile Perch in Lake Victoria is highly encouraged. This is because this large, predatory, nonindigenous species poses a threat to the other smaller indigenous species,” the company’s information kit reads in part.

Tanning fish leather along the shores of Lake Victoria has brought about a means to earn a living for the women living in the vicinity. This is another way to improve livelihoods of people in fishing communities without compromising their food security. A total of 403 women have formed a co-operative that works to clean up the shores and collect the fish skin before washing it and delivering it to the company.

“Another 15 are employed directly by the company to run the operations at the firm,” Mr. Raimondi explains.

The processing of the leather uses innovative environment–friendly techniques and finish with state-of-the-art technologies.

“We can obtain the highest quality product and a high production output. Utilizing fish leather provides a sustainable management of fish waste,” Mr. Raimondi says adding that: “We are 100% ecofriendly and highly regard ecological integrity of the environment. We make our leather from fish waste product. We do not in any way interfere with food supply chain, only making use of what cannot be eaten.”

The team is currently using hired equipment from Tanzania to process the fish leather. They are however looking to import tanning machines from Italy to start production in Kenya.

“Due to the lockdown we could not perform many activities.  We had planned to start building the manufacturing area in April but this was not possible due to the lock–down,” Mr. Raimondi adds.

Manufacturing is among the big four agenda for Kenya and according to Mr. Raimondi, their venture is getting full support from both the county and the national governments.

The firm currently exports ready–to–use leather to Uganda, China, South Africa, Oman and Nigeria. The leather can be colored to suit the clients’ requirements.

The firm intends to invest a total of US$1.0 million into the project which is expected to scale up production for exports multi-fold.

Overview of leather industry in Kenya:

Despite owning a fifth of the global livestock population, African countries account for only 4% of world leather production and 3.3% of value addition in leather according to a report by the Kenya Investment Authority (KENINVEST).

The leather sector in Kenya is estimated to be worth over KSh50 billion (US$46.2 million) annually. Unfortunately, exporting raw hides and skins has denied the country billions of shillings in direct earnings and thousands of job opportunities.

Over 90% of Kenya’s $94 million (KSh9.4 billion) leather exports are unfinished wet blue leather, yet further processing could create at least 50,000 jobs and $150-$250 million in GDP. Kenya seeks to produce 20 million shoes by 2022 in the leather industry in order to reduce the current import of finished shoes. The focus will be on training and setting up of 5,000 cottage industries to boost production in addition to a leather park to be established in Machakos to take advantage of the country’s hide and skin production.