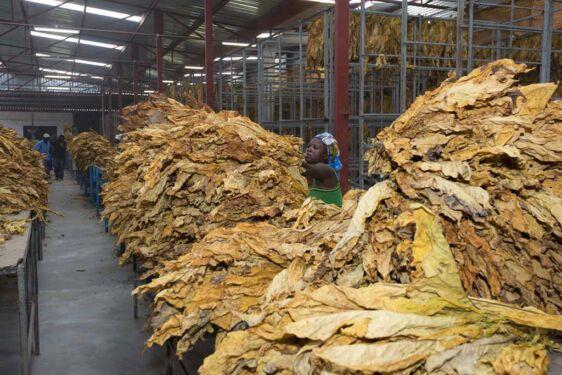 Zimbabwe Tobacco Farmers have collectively earned US$90,4 million from the sale of tobacco since its marketing selling season started as prices continue to firm.

Since the start of the 2021 tobacco selling season, farmers have sold 35,3 million kg worth US$90,4 million at an average price of US$2,56 per kilogram.

Comparing to the last season sale for the same period last which was an average price of US$2,25 per kg showed tremendous growth.

The bulk of the crop, as has become the norm, has been sold through the contract floors.

The substantive chief executive of the Tobacco Industry and Marketing Board (TIMB)  Mr. Meanwell Gudu speaking yesterday April 27 said that the selling season was progressing well with prices firming.

“The prices are firmer compared to last year,” he said. “The payments are being processed on time and farmers are accepting both RTGs [local currency] and foreign currency at the banks.

“The quality of the leaf is better this season because of the high rainfall although the yields are slightly lower. The crop is lighter as compared to the previous season.”

With some farmers already excited and receiving payments from both local and foreign currency at 60% and 40% respectively there is a feeling that some contractors are duping farmers as they are being charged high input prices, offered low prices, and paid after a long period.

The farmers have since questioned the TIMB for failing to play their regulatory role well as some companies that failed to pay farmers well last season are back on the market this year.

Mr Patrick Chinorwadza, a Chesa farmer, said TIMB should closely monitor some contractors as they were acting in the same way as middlemen.

Patrick in his remarks said the Tobacco market had been crowded by middle men who pay them low prices contrary to the market price,

“Some companies are charging farmers exorbitantly for inputs but offer low prices, which is unfair,” he said.

Mt Darwin farmer, Mr. Munyaradzi Mabuwana, said prices have been fair but complained of high bank charges which he said were eroding the profits.

“Prices are better than last year. So far, the situation is good but the high bank charges will affect us,” he said.

However, he said there were mixed feelings about overpayment modalities as some farmers were getting their money early while others take longer.

“Farmers feel some companies are ripping them off. We are going to approach the TIMB, RBZ, and the ministry for intervention,” he said

To date, the seasonal rejection rate is at 3,03 percent compared to 2,71 percent at the same time last season.

“This is an indication that we are having increased cases of poor handling and packing of the leaf by producers,” said Mr. Zakariya. “It also may be an issue to do with the quality itself. We continue to closely monitor the performance of the sales.”

Zimbabwe is the largest grower of tobacco in the Continent and the 6th largest grower in the world with Over 95% of Zimbabwe’s tobacco consisting of flue-cured tobacco which is renowned for its flavor.

In Zimbabwe there are three types of tobacco that traditionally have been grown in the country: Virginia flue-cured, burley and oriental tobacco.

Tobacco is an intensive cash crop in Zimbabwe becoming one of the major part of Zimbabwe’s economy. it is also a major source of foreign exchange for this southern African nation with sales reaching $782 million in 2020.