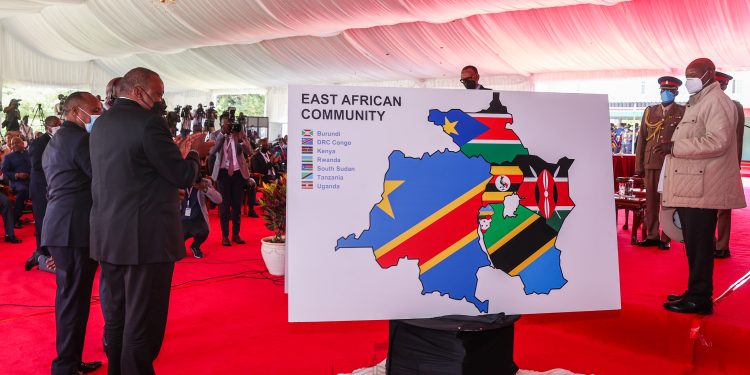 The Democratic Republic of the Congo is a major supplier of raw commodities such as minerals and cocoa.

According to Emmanuel Nkusi, Board Director of the East African Business Council, the commercial links of the Democratic Republic of Congo (DRC) with the other East African Community Partner States will greatly increase now that the DRC has joined the Community.

Nkusi, while delivering a speech at the Business Meeting in Goma that was organised by EABC and the Federation of Enterprises of Congo (FEC), stated that “In 2020, EAC countries imported commodities worth USD.49.2million from the DRC while exporting USD.584million to the DRC.”

He extended his congratulations to everyone in the Democratic Republic of the Congo (DRC), including the people and the government, which is led by His Excellency President Félix Antoine Tshisekedi Tshilombo, on the signing of the Treaty of Accession of the DRC into the EAC.

The inclusion of the consumer market of the Democratic Republic of the Congo, which has close to 90 million people, will increase the size of the East African Community market to nearly 300 million, and it will open the bloc to the economy of the Congo, which is rich in a variety of natural resources.

Benefits to other EAC members

The majority of EAC members struggle with insufficient timber supply, and strong restrictions prohibit illegal harvesting; the EAC bloc can tap into the Democratic Republic of the Congo as a key provider of hardwood timber because it possesses approximately 156 million ha of the rainforest.

In addition, the Democratic Republic of the Congo is home to the Congo River, which is the second-longest river in the world, as well as extensive stretches of land that are rich in fertile soil. Because of this, the country has the potential to be one of the largest producers of agricultural products in the world. As a result, the Democratic Republic of the Congo is becoming an attractive location for agricultural investors.

Cobalt, copper, diamonds, tantalum, tin, and gold are just some of the minerals that are produced in significant quantities in the Democratic Republic of the Congo (DRC). These natural resources are responsible for the lion’s share of the country’s total revenue from exports. The country’s overall mineral wealth was estimated to be worth US$ 24 trillion in 2009, which is the same as the gross domestic product of both Europe and the United States.

The Democratic Republic of the Congo (DRC) is still classified as a developing country despite having an abundance of mineral resources. In light of this, it is possible that EAC will explore these enormous potentials in terms of the community’s mineral treasure in the event that it is accepted membership is ratified.

As a result, now is the time to think about the DRC by its potential market throughout the expansion process. Within the region, the free movement of people, goods, and capital is encouraged and supported by the EAC convention.

In theory, the countries of East Africa may gain access to the Atlantic Ocean and West Africa through the Democratic Republic of the Congo (DR Congo), but in order to do so, the country’s road and rail networks would need to undergo a significant amount of improvement first. At the time, flying is the only option for traversing this enormous country, which is equivalent in size to almost two-thirds of western Europe.

According to Ezra Munyambonera, an economic scholar working at the Economic Policy Research Center, the accession of Congo to the EAC will be beneficial to all of the nations that make up the bloc.

According to Munyambonera, “It (the Democratic Republic of the Congo) has a lot of resources, and it Joining the East African Community improves the region’s microeconomic circumstances and stability in terms of foreign profits and attracting investments for greater economic growth.”

According to John Bosco Kalisa, the Democratic Republic of the Congo’s accession to the EAC has cleared the way for the elimination of visa fees and the enhancement of regional transportation infrastructure. It is anticipated that this will lower the overall cost of conducting business. At the moment, Tanzanians and Ugandans who wish to enter the DRC are required to pay a visa fee of USD.50 for a visa that is valid for thirty days, and vice versa.

The Democratic Republic of the Congo (DRC) has a number of trade barriers, including regulations and procedures that are arbitrary and unclear, a bureau of standards that have a poor capacity, and exorbitant road toll prices.

The head of the Kenya Long Distance Truck Drivers and Allied Workers Union, Roman Waema, is looking forward to the day when he will no longer have to wait in the never-ending line that he is currently forced to stand in order to enter DR Congo.

“At the moment, we are confronted with a multitude of challenges, such as standing in line to obtain a visa for entry into the DRC, waiting for days to have our commodities cleared at the border, and as a result, incurring enormous parking and storage fees, as well as other costs before reaching our ultimate destination,” he said.

The process of shipping goods over international borders ought to be made a great deal simpler; at present, the authorities at the various border crossings all operate their own unique systems.

“The clearance of items will take place more quickly. Once the one-stop border post is operational, customs officials from Uganda and the DRC will clear goods and people while sitting in the same building in order to streamline the process,” says Guma Morris, The Uganda Revenue Authority  Mpondwe border supervisor.

The inclusion of the consumer market of the Democratic Republic of the Congo, which has close to 90 million people, will increase the size of the East African Community market to nearly three hundred million, and it will open the bloc to the economy of the Congo, which is rich in a variety of natural resources.

Benefits DRC is set to gain joining the EAC

The overall gross domestic product of the EAC in 2019 was 193 billion dollars. The inclusion of the DRC might either stand as an opportunity or a burden. Who knows? Only time will tell.

The President of the FEC-Goma, for his own part, according to Bercky Chirimwami, “We are eager to enhance the capacity of businesspeople in the DRC to successfully do business in the EAC Common Market.” He advised businessmen in the Democratic Republic of the Congo to search for opportunities in international commerce and investments.

During the Business Meeting, participants from the Democratic Republic of the Congo’s business community gained insight into the possibilities presented by the EAC Common Market. In order to facilitate more B2B networking, the EABC entered into a partnership with the FEC-Goma to implement awareness campaigns on EAC procedures, the African Due Diligence Platform (Mansa), and the East African Trade and Investment Mission to the DRC.

An industrial tour of Lowa Chocolaterie, a small and medium-sized enterprise in Goma, Democratic Republic of the Congo that produces chocolates and choco-butter, was one of the side events that EABC CEO Kalisa participated in. The Lowa Chocolaterie is interested in growing its customer base among the other EAC Partner States.

The nation has land borders with all other EAC members, with the exception of Kenya, and is hoping to entice extra investors from its neighbours. By becoming a member of the group, the Democratic Republic of the Congo will have improved access to infrastructure such as the port of Dar es Salaam and Mombasa, which are located on the Indian Ocean.

The Democratic Republic of the Congo will gain advantages as a result of the East African Community Common Market and Customs frameworks. These frameworks will make it simpler and more convenient for DRC to gain access to the markets.

The cost of shipping commodities will go down significantly, and import duties on products that are recognised as having been manufactured in the Democratic Republic of the Congo will be eliminated or significantly reduced when entering other nations.

“We have waited for a very long time for this announcement to finally come. We are filled with joy, “A Congolese merchant named Ley Molo Ley who is stationed close to the Ugandan border told the BBC about the situation.

According to him, travel to Uganda is now difficult for Congolese commercial society because of the following: “At the Democratic Republic of the Congo side of the border, a Congolese person must pay $45 (£35) to obtain travel documents in order to reach Uganda. Then, once they have crossed into Ugandan territory, they will be required to pay USD$50 dollars for a visa. After that, there are fees associated with a Covid-19 test; therefore, the entire cost is approximately USD$120.”

Penina Simba, a trade consultant, says that “insecurity restricts trade.” However, increasing the amount of official trade between the EAC and the DRC may actually help to reduce conflict in the eastern part of the DRC. This is because it would reduce the amount of smuggling that occurs as a result of increased collaboration in sectors such as security, customs, and trade.

In a previous interview with The EastAfrican, Equity Group CEO James Mwangi stated that They were looking for Tesla CEO Elon Musk to develop a plant in the Democratic Republic of the Congo. so that Musk could take advantage of the raw materials and add value at the source. Mwangi made this statement in reference to the fact that Equity Group was seeking Musk’s involvement.

The costs of the raw commodities produced in the DRC have reached an all-time high on the global commodity market. The desire for environmentally friendly forms of energy is the primary factor propelling the greening of the world. Today, the Democratic Republic of the Congo is the source of 70 per cent of the world’s coltan and cobalt supplies. Additionally, its copper is of the greatest quality in the world, and its supply accounts for 30 per cent of the global total.

Nevertheless, some security experts worry that the nation’s actions may jeopardise its security: “Stewart Muhindo’s study concludes that our membership in an organization that includes hostile states makes us susceptible security-wise. Our economic situation is dire. And because our economic situation is not robust enough, therefore we risk becoming a market for other states’ commodities.”