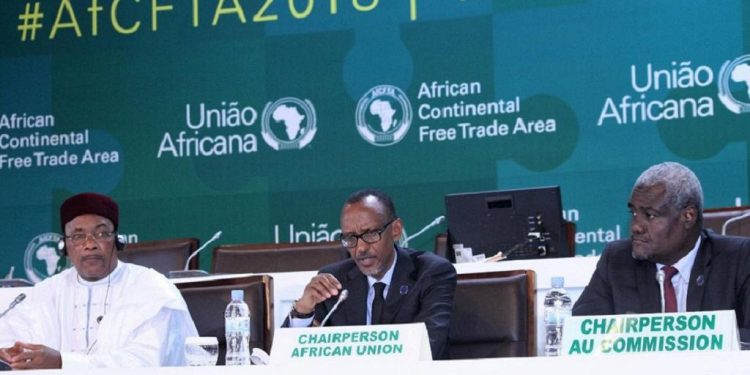 AfCFTA Agreement will enter into force; 30 days after the required number of ratifications have been deposited with the AU.

by Salum Mohamed
in Africa's Development, Economic Growth
0
Share on FacebookShare on LinkedIn

That will be decided during the forthcoming African Union meeting slated to take place in the next three months, according to the officials who gathered in Arusha on Thursday 25th April, 2019.

The proposed African Continental Free Trade Area is not simply a `Free Trade Agreement` it is about establishing a unified continental market with 1.2 billion potential customers and where the private sector is the major engine to make it happen.

The one-day meeting, organized jointly by the East African Business Council (EABC) and the United Nations Economic Commission for Africa (ECA), convened close to 40 key players from the region`s private sector. The office for Eastern Africa of ECA estimates large potential gains from the AfCFTA, including an increase in intra-African exports of Eastern Africa by nearly Tshs.2.3 trillion ($1 billion) and the job creation of 0.5 to 1.9 million.

`Together African economies have a collective GDP of $2.5 trillion, making it the eighth largest economy in the world. That makes the continent much more attractive to investment, both from within and from outside the continent, ` said Andrew Mold, acting Director of ECA in Eastern Africa. `This should encourage business people to take advantage of AfCFTA and make the investments necessary to sustain economic growth and create employment.`

Nick Nesbitt, Chairman of EABC, emphasized the importance of the continent having a clear vision to put an end to the fragmentation of the internal market. `I really applaud everybody who has been involved in creating the AfCFTA because their vision is the one of Pan-Africanism. It is something our founding fathers aspired for a long time. Our thanks to ECA for being at forefront of this conversation and pushing the agenda forward so that the continent becomes a single economic trading bloc, ` he said.

Kenneth Bagamuhunda, Director General of Customs and Trade at the East African Community Secretariat, cited the experience of Regional Economic Communities as the building blocks for the AfCFTA. `The AfCFTA should build on what has already been achieved in regional negotiations like the Tripartite Free Trade Area, as well as within our respective regional blocks,` he said. Bagamuhunda also highlighted governments need to set a conducive environment for the successful implementation of AfCFTA.

The AfCFTA was signed in March 2018, at a historic meeting of the African Union in Kigali. 52 of 55 African Union member states have so far signed the AfCFTA, 22 countries that have ratified the agreement, which was the minimum number for it to enter into force. It seeks to create the largest trade zone in the world, increase intra-African trade by 52% by the year 2022 and remove tariffs on 90% of goods.

A summary of AfCFTA’s progress

African aviation has potential to rake in $29 billion