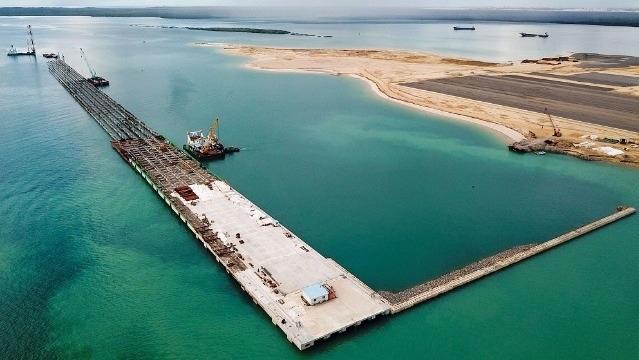 Lamu Port in Kenya. In many African ports, the current infrastructure is insufficient to meet the current demand.

Collateralized debt and Africa’s rise from a crisis

Some 11 sub-Saharan African (SSA) countries are currently at high risk of debt distress according to the latest debt sustainability analyses by the International Monetary Fund (IMF).

Already, six countries are in debt distress and the debt burden is worsening in the region where the public debt ratio to gross domestic product has surged to 65.6 per cent from 56.4 per cent pre-Covid-19 period.

A study conducted by the China-Africa Research Initiative (CARI) at Johns Hopkins University shows that there is a trend where African governments are mortgaging their natural resources to secure loans from China. This has often ignited debt distress when commodity prices collapse.

Read: Why do lenders want “COLLATERAL”?

This mortgaging of resource is referred to as collateralized sovereign debt. This is where a sovereign loan is secured by existing assets or future receipts owned by the borrowing government. The collateral could be commodities, future export revenues, or infrastructure use such as electricity. Collateral lending is characterized by the fact that the lender can take control of the collateral if the loan is not repaid.

Countries that have already mortgaged their future revenues from natural resource exports as collateral for Chinese loans are the Democratic Republic of Congo (DRC), Sudan and South Sudan, Ghana, Angola and Guinea.

The CARI study cautions that contracting future revenues from natural resource exports as loan repayment is a way both for borrowers to attract finance and for lenders to mitigate risks to repayment but that this lending mode could cause problems when commodity prices fluctuate.

For perspective, Angola and the DRC have been forced to renegotiate their debt for relief because the two countries have used their massive oil and copper resources to secure loans from China. They have fallen victim to the collapse of commodity prices which has forced them back to the drawing board for renegotiation.

Between 2000 and 2019, Chinese and state-owned financiers pumped in US$153 billion into African public sector borrowers where not less than 80 percent of the loans went towards infrastructure projects like transport, power, telecoms and water.

In 2019, Chinese financiers committed 30 percent less funding where African borrowers received US$7 billion down from US$10 billion in 2018.

Kenya, Ethiopia, Zambia, Angola and Nigeria have been the biggest Chinese loans takers cumulatively borrowing US$71 billion from 2010 to 2018.  Ghana became the biggest recipient of Chinese loans at US$1.25 billion in 2019, followed closely by South Africa and Egypt.

China has consistently faced criticism particularly from the West especially the United States for burdening Africa with debt. This encumbrance has led to some countries like Zambia defaulting on its debt while others are compelled to contend with the reality of debt distress, which is on the rise.

Kenya has, just like Zambia, denied reports that China is angling to seize strategic national assets like utility Zesco in Zambia and the Mombasa Port in Kenya if the countries default.

The latest African Development Bank (AfDB) report, Economic Outlook 2021, From Debt Resolution to Growth: The Road Ahead for Africa notes that African countries in debt distress situations will find repaying their loans an uphill task.

Read: Some African countries on precipice of defaulting as debt rises

Some countries have debt collateralization which could be a good or a bad thing depending on the approach taken to honour debt obligations.

On the one hand, collateralized sovereign debt can be beneficial because it reduces the risk attached to a loan, decreasing its cost. It can allow market transactions and access to external financing that would have not been possible otherwise.

The report adds that on the other hand, it raises many concerns about countries’ capacity for repayment—when there often is a lack of transparency on contractual terms, where it is difficult to assess the level of risk, or when transactions are unproductive and do not generate enough resources for debt repayment.

Countries like Angola, Chad, or the Republic of Congo are oil producers and they use collateralized borrowing and are more sensitive to commodity price fluctuations. A decrease in oil prices leads to tensions on oil production that is used to avoid default.

A major consequence is that a large share of oil revenue is used to repay loans, leading to fewer resources left for governments. These are typical examples of resource-backed loans that are sovereign loans in which repayments are in natural resources, from future revenues from natural resources exploitation, or when natural resources are used as collateral in debt contracts.

One of the consequences of debt collateralization is that it has the potential to raise hidden debt due to the race to seniority it generates.

If creditors have collateralized a country’s strategic assets, they may claim seniority based on that collateralization in the negotiations between a country and its creditors.

These debt obligations increase debt vulnerabilities when they are disclosed for several reasons. The seniority position of sovereign debt defines the bargaining power of lenders during debt resolution negotiations, that is, those who can or cannot be part of the resolution decisions.

It makes debt resolution negotiations more complex and raises concerns about repayment capacity and thus future borrowing. Collateralized loans also can create some moral hazard behaviour by reducing incentives of borrowers to use and manage their debt wisely, leading to sovereign over-borrowing.

Debt accumulation on the continent is projected to accelerate quickly from the combined effect of increased public spending and a contraction in GDP and revenue.

The report notes that although the average debt-to-GDP ratio had plateaued to around 60 percent in 2017 to 2019, it is expected to climb significantly to more than 70 per cent in the short term. That reflects the growing financing needs of many governments as a result of increased public expenditure to respond to the impact of the coronavirus pandemic and shrinking revenues due to the pandemic’s shocks to economic fundamentals—exports, remittances, and tourism.

Debt-to-GDP ratios are projected to increase by up to 10 to 15 percentage points in the near to medium term. The jump in debt levels is expected to be more pronounced in tourism- and resource-dependent economies that rely heavily on these sectors for foreign exchange earnings and government revenue.

Read: Debate on Africa’s debt in the offing