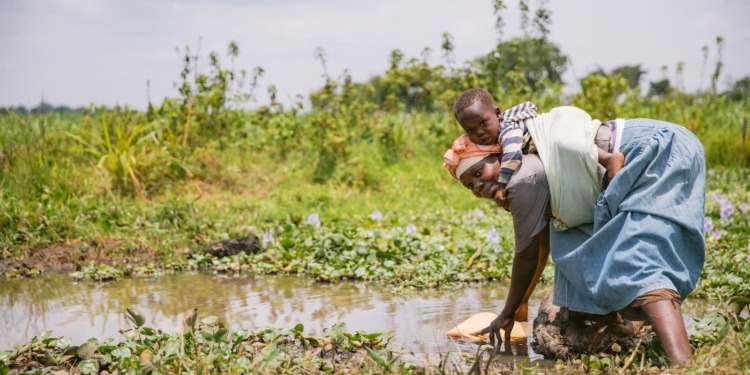 A woman and her child fetching water from a swamp in Kikomera Biri village in Uganda. Communities have to also play a role in ensuring that their water rights are addressed. [Photo/ Lifewater.org]

More than the 80 per cent of the beds in African hospitals are occupied by people suffering from waterborne diseases.

Drinking water from the tap in any country in the world is a risk to many people’s health but it is much worse in Africa.

Africa’s situation is worsened by the fact that getting treatment in case of waterborne disease is tedious due to challenges ranging from transportation, finances and in many cases, the availability of doctors.

Interestingly, more than 80 per cent of beds in African hospitals are occupied by people suffering from waterborne diseases. The irony is that malaria, cancer, terrorism and Aids altogether do not total half the deaths caused by water-related diseases. Lack of clean water and the consequences thereof, kill hundreds of thousands every day.

Matter of life and death

Globally, the lack of access to water and sanitation is a matter of life and death. In the world we live in today, at least two billion people use a drinking water source contaminated with faeces.

Estimates show that two-thirds of the world population is water-insufficient.

To supplement the inadequate water supplies, those residing in these cities seek alternative sources of water some of which are unsafe for human consumption. This leads to increased risks of contracting water-borne diseases which in turn burdens and overwhelms medical resources.

So dire is the situation in Africa that the continent contributes to 53 per cent of all diarrhoeal cases reported globally. Your guess is as good as any that contaminated drinking water is the main source of transmission.

In Africa, these diseases cause more than half a million deaths each year. The biggest casualty is children under five which makes up 90 per cent of the deaths.

To plug in the gap and address this water challenge, WATERisLIFE helps communities have access to safe water by every means possible. This includes using some of the most innovative technologies and skill-sharing.

How you may ask?

This happens through the digging of wells and sinking of boreholes, education and employing filtration processes in the most affected areas which happen to be in informal settlements and rural villages. With the impact that clean water has on the performance of school-going children, WATERisLIFE has also provided these solutions in schools with the main goal being to end the world water crisis in the 46 countries they have a presence.

In addition to saving lives, clean water helps with immense financial savings for people and countries.

The WHO notes that water from more accessible and improved sources sees people spending less time and effort to physically collect it which increases productivity in other ways. For a start, this can result in greater personal safety by reducing long or risky journeys for water collection. Additionally, better water sources translate into less expenditure on health since people will less likely fall ill. This will mean that there will be no medical costs incurred while overall, people will remain economically productive.

As mentioned, children are the most at risk from water-related diseases thus improved access to clean water sources can result in better health hence better school attendance which has long-term consequences on children’s lives.

The WHO notes that by 2025, at least 50 per cent of the world’s population will be living in water-stressed areas.

Climate change, which is a very real threat now, is increasing water scarcity problems at an alarming rate. Africa, whose population is expected to more than double by 2050, will see the water sources stretched due to population growth, demographic changes and urbanization.

Since water stress is already starting to affect many countries, some have resorted to re-using wastewater which is helping with water recovery.  Wastewater use for irrigation represents 7 per cent of irrigated land in developing countries.

With the demand for water increasing each day, options for better and clean water sources will continue evolving. Already, there is an increasing reliance on alternative sources including groundwater and wastewater.

Climate change which is leading to great fluctuations in the weather is negatively impacting rainwater harvesting which means that water resources management need to improve to ensure quality water provision.

In 2016, diarrheal diseases accounted for more than half a billion deaths in sub-Saharan Africa (SSA). Cholera, typhoid fever and other diarrheal diseases are some of the priority diseases associated with poor quality water as noted by disease surveillance and response in SSA.

Water-borne illnesses are often spread through contaminated drinking water systems. Most of the contaminants are faeces and the urine of sick people and animals. Another contaminant is runoff from garbage sites, landfills, sewer pipes, septic systems and industrial and residential developments.

To fight the spread of water-borne diseases in Africa, all stakeholders have to institute better sanitation measures and provide drinking water, washing and bathing facilities that promote improved hygiene. Also, water should be kept separate from waste.

In addition, extensive education programmes could help ensure that residents are aware of proper hygiene techniques to keep their water supplies safe.

Governments have to also work towards providing conducive environments where investing in the water sector is not cumbered by bureaucracy. Since finances are often a deciding factor when working to create access to clean water, subsidies in the sector could prove effective to attract investments.

Communities have to also play a role in ensuring that their water rights are addressed. Just like with the provision of other services by their governments, these communities have to pressure their authorities to prioritise their investments in clean and reliable water sources since data show that clean water can cut disease burden by a large percentage.

And as Coté Terré, WATERisLIFE’s ambassador says, “We get things done. And we believe that action is the first ingredient in change. Because when we all decide to give just a little, big things can happen.”

Read:  EAC has to join hands to ace tourism offerings