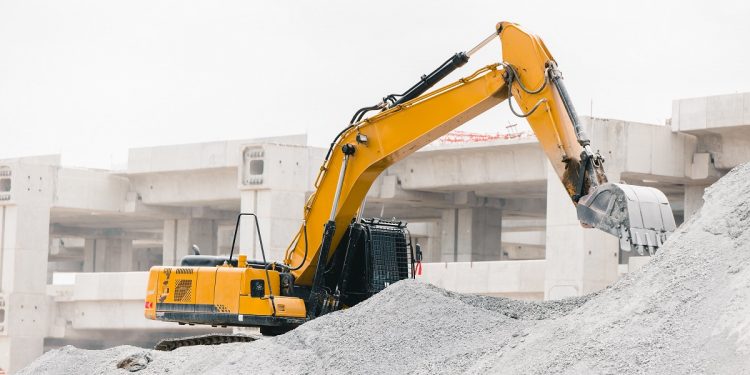 Excavator at a construction site. FDIs to Africa have continued to decline.

According to the United Nations, these flows declined in 2020 by 33 per cent to US$1 trillion.

by Laurence Sithole
in Africa, Investing
0
Share on FacebookShare on LinkedIn

According to the United Nations, these flows declined in 2020 by 33 per cent to US$1 trillion. This level of foreign direct investment flows was last seen in 2008 at the height of the global financial crisis.

These financial flows of investment dollars have deep-rooted implications for Africa in the sense that they are vital for sustainable development in less developed and poorer countries.

Interestingly, FDI flows to Africa fell by 16 per cent to $40 billion – a level last seen 15 years ago. Greenfield project announcements, key to industrialization prospects in the region, fell by 62 per cent. Commodity exporting economies were the worst affected.

The COVID-19 crisis rolled back the progress that had been made in terms of bridging the investment gap between wealthier nations and their less-developed counterparts following the adoption of SDGs. The major priority for world leaders now that the globe is recovering from the effects of the pandemic will be to ensure investment to support and sustain recovery is increased. The focus of investment flows going forward should be on infrastructure development, energy transition, resilience and healthcare, the report added.

The focus globally and for Africa, is not only the recovery and reigniting the economy but also building up resilience against future shocks. African leaders thus need a coherent policy approach to promote investment in resilience, balance stimulus between infrastructure and industry, and address the implementation challenges of recovery plans. 2021 saw the trend of declining foreign direct investment reverse. This was driven mainly by the IMF’s decision to introduce vast amounts of liquidity to the market in the form of its US$650 billion package.

By and large however, during the two years that the COVID-19 pandemic raged FDI flows world over generally declined. It has been noted by several multilateral institutions that for Africa to attract growing levels of FDI vaccine accessibility is a necessary precondition, fiscal space is also required together with economic certainty. These have largely been limited in many African countries which is a possible explanation for the limited growth in FDI.

UNCTAD predicted growth in FDI in Africa of 5 per cent throughout 2021 but remain 15 per cent below 2019 levels. To Africa’s credit and an advantage for its economic prospects going forward, commodity prices largely rebounded from their slumped levels in 2020.
Going forward as the investment climate improves the region’s high potential and investment needs will accelerate FDI inflows. Notably, the efforts of African Continental Free Trade Agreement (AfCFTA) in terms of lowering barriers to inter-regional trade will support FDI flows with greater scope to expand. 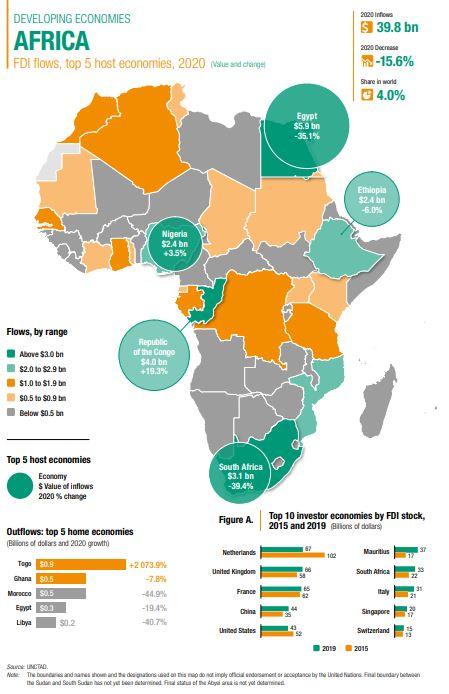 FDI flows to African economiesRead: FDI in Africa drop but AfCFTA becomes economic anchor
In 2020 African countries that attracted the most in terms of FDI were Egypt which attracted a total of US$5.9 billion representing a decline of 35.1 per cent followed by the Republic of Congo with net in-flows of US$4 billion which was an increase of 19.3 per cent.

South Africa came in third with investment inflows of US$3.9 billion which was a decline of 39.4 per cent. Nigeria and Ethiopia both came in with net inflows of US$2.4 billion representing an increase of 3.5 per cent and a decrease of 6 per cent, respectively.

These countries were the outliers of the continent in that they recorded inflows of more than US$2 billion. Most of the countries had net inflows of less than US$500 million. The rest of the countries attracted inflows of anything between US$500 million and US$1.9 billion. The World Investment Report estimates that the continent went into its first recession in 25 years; the economic slowdown and mobility restrictions weighed heavily on investment indicators. Greenfield project announcements, an indication of investor sentiment and future FDI trends, dropped by 62 per cent to $29 billion, while international project finance, especially relevant for large infrastructure projects plummeted by 74 per cent to $32 billion.
FDI to Algeria dropped by 19 per cent to $1.1 billion, with inflows mainly directed to the natural resources sector. In 2020, Algeria lifted restrictions that capped foreign ownership at 49 per cent, except in the retail industry and in strategic sectors, including infrastructure and natural resource processing. FDI inflows to sub-Saharan Africa decreased by 12 per cent to $30 billion, with investment growing in only a few countries. Despite the pandemic, efforts to diversify FDI had a positive impact. One important greenfield investment ($66 million) in the non-oil economy was the construction of a manufacturing facility in the Lekki Free Trade Zone by Ariel Foods (Kenya).

There was also a significant M&A deal in the same region, with China Communications Construction Company providing the initial $221 million equity injection in Lekki Deep Sea Port, out of a planned total investment of $629 million.

Other transactions that contributed to FDI diversification, such as the investment by Multichoice Group (South Africa) in Betking, a provider of data hosting services, were relatively small. Senegal was among the few economies on the continent to have received higher inflows in 2020, with a 39 per cent increase to US$1.5 billion, due to investments in energy, in both the traditional oil and gas industry as well as renewables. The largest investment realized in 2020 was PepsiCo’s acquisition of Pioneer Foods after the Competition Tribunal of South Africa approved the deal.

The acquisition, announced in 2019, is worth $1.7 billion, to be disbursed over several years.
Coming into 2021 UNCTAD predicted quite rightly that FDI in the world generally would increase but limited to certain parameters. FDI in Africa faces strong headwinds and faces significant downside risks.

Over the long-term vaccine availability, domestic economic recovery policies and international financial support will be critical to the revival of FDI. 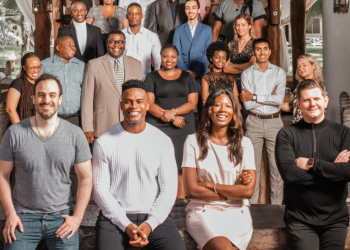 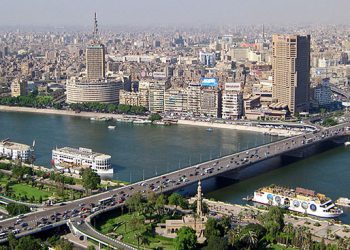