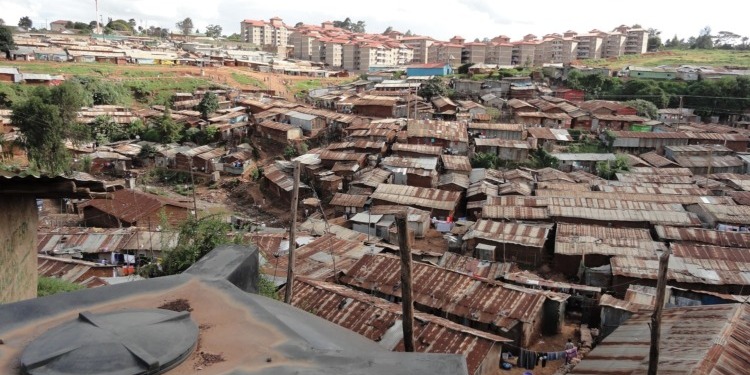 Kenya’s biggest slum, Kibera. The lion’s share of affordable housing is being taken up by government projects mainly driven by availability of land. [Photo/ Clean Water For All]

by Njenga Hakeenah
in Investing, Kenya
0
Share on FacebookShare on LinkedIn

By 2030, nearly half of Kenyans will be living in cities as many young people keep moving to urban areas in search of jobs, opportunities and more choices.

With half of Kenya’s population aged under 18 and with the mass movement to urban areas, the housing challenge will continue until it is sustainably addressed.

In 2018, the government of Kenya started a journey towards providing 500,000 decent, affordable housing units by 2022.

This plan was meant to address the nation’s chaotic living status where the majority, especially in urban areas, have been forced to live in informal settlements due to various factors including low incomes and the rural-urban migration which has seen urban populations outpace facility development in the areas they move in to.

The government’s plan, under what was dubbed the Big 4 Agenda was to see low-cost housing provided for those earning between KSh15,000 (US$150) to KSh49,000 (US$50). There was also a plan to cover those with little or no income at all.

But questions on how the houses would be allocated threw cold water on the project which sounded like a scam every time government officials tried to explain the proposal and how it would work. What threw a spanner into the works was the argument that Kenyans who were contributing to the scheme would have to play a lottery to be allocated a house.  This basically meant that even if one was a faithful contributor, they were not assured of owning a home.

Such is Kenya’s path towards providing affordable and decent housing which remains an elusive dream. However, the International Finance Corporation (IFC) has jumped into Kenya’s plans to help meet surging demand for housing in the country of 50 million.

The Kenyan government and the IFC announced a partnership in June 2021 with Belco Realty LLP, a Kenyan firm to support the development of a mixed-use affordable living complex that will consist of 1,379 residential units and over 4,500 square metres of retail and commercial space in Kongowea, Mombasa County.

Under the arrangement, IFC will help identify suitable international strategic partners to invest equity of up to US$12 million (KSh1.3 billion) in Belco and to provide the company with the necessary technical support to develop the project.

Vijay Patel, Managing Partner of Belco said during the partnership announcement that affordable housing presents a unique investment opportunity to positively impact whole communities whilst attaining the highest standards of sustainability to help push cities towards a circular economy.

He added that the partnership with IFC highlights a mutual understanding of the power of scale to drive change and a commitment to surpassing accepted norms.

The development, known as Kongowea Village, will be developed to foster inclusive and affordable community living within the city. Located on eight acres within the heart of Mombasa City, the project aims to be a catalyst for wider city regeneration.

Kongowea Village will be developed to meet IFC EDGE certification requirements and will incorporate the latest technologies in passive cooling, energy efficiency and water conservation to support sustainable urbanization.

The project is expected to create 1,160 jobs and business opportunities during the three-year construction period and many more after completion within the themed retail arcade.

IFC’s Regional Director for Eastern Africa, Jumoke Jagun-Dokunmu, said that access to quality housing is a growing problem in Kenya and across Africa since developers often target the high end of the market.

He said the difference with the Kongowea Village project is that it is aimed squarely at the lower-income bracket. He added that helping Belco identify the right partners for this project is expected to attract more developers to Kenya and other parts of Africa to help meet the rising demand for housing.

The IFC’s engagement with Belco will help Kenya support its rapidly growing and urbanizing population by increasing access to affordable housing.

The problem is similar across most of Africa, where population growth and demand for quality housing are combining to outstrip supply, said Emmanuel Nyirinkindi, IFC’s Director for Transaction Advisory Services, adding that their partnership with Belco would contribute to solving this challenge.

IFC’s partnership with Belco is part of its broader strategy to support better access to affordable housing in Kenya. In 2020, IFC invested US$2 million in equity in the Kenya Mortgage Refinance Company (KMRC) to help increase access to affordable mortgages and support homeownership.

Towards achieving universal access to decent housing, the Kenyan government expects the private sector to contribute 60% of the development. With this, international property developers have been angling themselves to tap into housing projects under the Big 4 Agenda.

During the sixth East Africa Property Investment Summit (EAPI) held in Nairobi in April 2019, the Kenyan government called on the private sector to support the projects, assuring them of offtake.

An offtake assurance or agreement is a commitment between a producer and a buyer to purchase or sell portions of the producer’s future production.

Under his plan, President Uhuru Kenyatta promised Kenyans affordable and decent houses, universal health care, food security and a revamp of the manufacturing sector to increase its contribution to the GDP to 20 per cent by 2022, from the current 9.2 per cent. However, this seems like a dream that may never be realised.

While Kenya seems to be in the deep of things, the housing problem is not peculiar to the East African country.

Cumulatively, Africa needs more than US$1.4 trillion in funding to be able to effectively address the growing housing crisis.  According to Shelter Afrique, the overall shortage of housing in Africa is estimated to be 56 million housing units. More than 90 per cent of this, or 45 million units, are in the affordable housing bracket.

For Africa to fully address the affordable housing shortage issue, the continent needs an average construction cost of US$25,000 per unit adding up US$1.4 trillion. Noteworthy is that this cost excludes the cost of the bulk infrastructure.

Among the most affected countries include Nigeria with a housing deficit of 22 million housing units; Tanzania and the Democratic Republic of Congo with a deficit of 3 million units while Kenya, South Africa and Madagascar have deficits of more than 2 million or more units.