SDGs 6, 7 and 9 present the biggest opportunities for investors

Kenya has an opportunity for the private sector in electricity generation and supply, innovation and industry as part of meeting the UN SDGs. [Photo/Pexels]

SDGs 6, 7 and 9 present the biggest opportunities for investors interested in clean water and sanitation, affordable and clean energy and industry, innovation and infrastructure respectively.

According to The Standard Chartered SDG Investment Map, Kenya is among countries in the emerging markets which cumulatively have a US$10 trillion (US$9.668 trillion) opportunity.

The Opportunity2030 study shows that Kenya is ripe as a market that can easily accelerate its economic growth going by the needs it has. If solutions are provided for the millions who need them, then the economy can be catapulted to favour the majority without the basics of the 3 SDGs.

CEO & MD at Standard Chartered, Kariuki Ngari, says: “The UN Sustainable Development Goals are amongst the most ambitious projects humanity has ever attempted. For the goals to be met, the private sector must play a central role in deploying capital to get projects off the ground.”

The opportunity for the private sector to improve the lives of Kenyans is substantial. Currently, 56 per cent of Kenyans lack access to clean water and sanitation, while 36 per cent have no access to electricity, and the country’s digital access rate – a combination of mobile phone subscription rates and internet connectivity – stands at 34 per cent.

Kenya is yet to achieve increased access to water and sanitation.

As one of the countries that failed to hit this key milestone, a meagre 30 per cent of Kenyans have access to improved sanitation. This percentage means that more than 30 million Kenyans are still using basic types of latrines while almost six million defecate in the open.

In addition, there are health risks associated with this which increase the health burden of an already stymied economy.

The number of those without access to toilets could go higher if numbers of shared facilities are included in the data provided by the World Bank.

To compound the problem further, sanitation in urban areas is further complicated by the connection between water supply, stormwater drainage and solid waste.

Increasing the population means that the structures to provide the services like drainage systems cannot withstand the pressure unless upgrades happen consistently. However, upgrading drainage systems in cities like Nairobi would mean spending millions of dollars since they have been neglected for several decades.

The pressure occasioned by the migration means that these systems will only break leading to a chaotic situation in the city of more than three million people.

For the 56 per cent of Kenyans who still do not have access to clean water and sanitation facilities, closing this gap by 2030 will require significant investment, with an opportunity for the private sector to provide around US$2.3 billion of the funding. 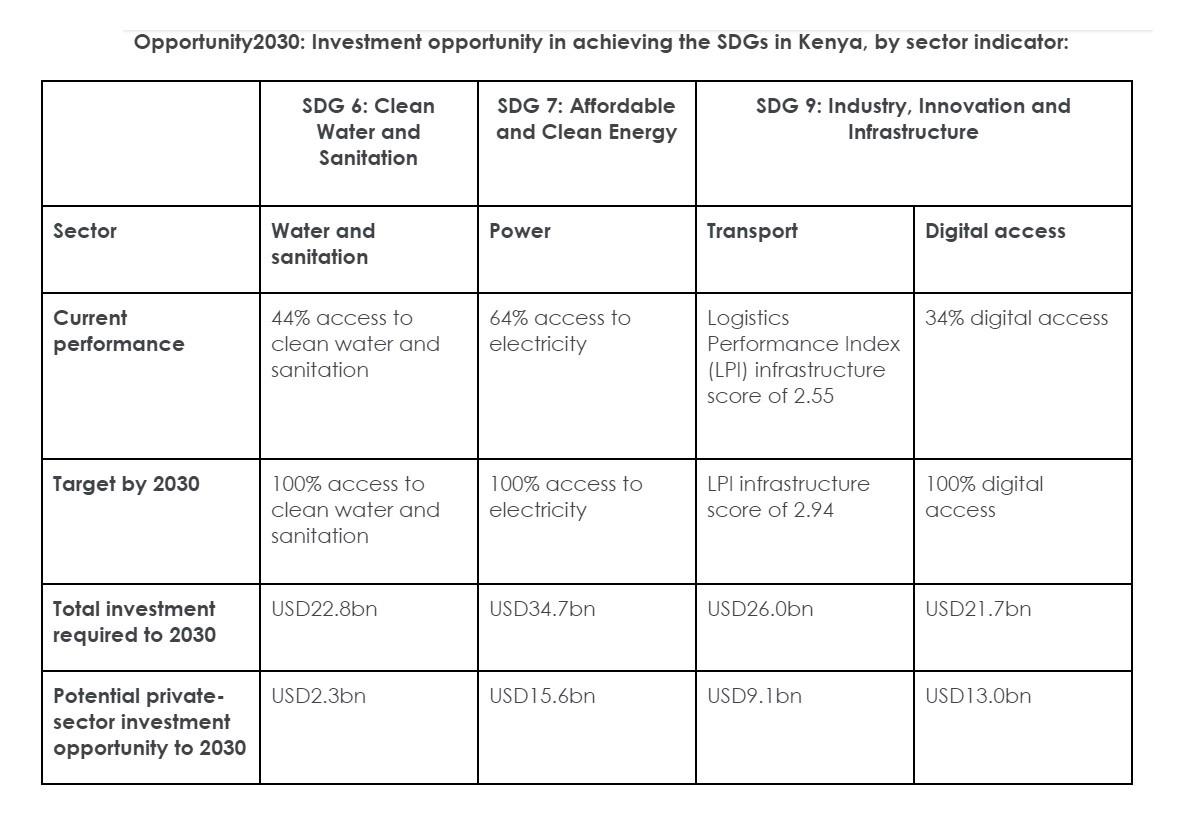 The greatest opportunity in Kenya is found in achieving and maintaining universal access to electricity (a key SDG 7 indicator). This represents a US$15.6 billion private-sector opportunity. It takes into account the proportion of the Kenyan population currently without electricity access, projected population growth, and the growing demand for power as the economy develops.

This East African economic hub’s energy sector is dominated by wood fuel which provides the basic energy needs of rural communities, the urban poor and also the informal sector. Electricity generation is largely dominated by diesel and hydro but there is a shift to wind and solar albeit at a much smaller scale.

There is a heavy dependency on wood and other biomass for fuel accounting for 68 per cent of the total energy consumption. Petroleum stands at 22 per cent while electricity is at 9 per cent.

Other energy sources account for a meagre 1 per cent. Kenya plans to increase electricity connectivity to at least 65 per cent by 2022 from the current 15 per cent.

This means that the opportunities in the energy sector remain lucrative.

Securing full digital adoption in Kenya – measured by a combination of mobile phone subscription rates and internet connectivity levels – would require a private-sector investment of around US$13 billion.

To significantly improve Kenya’s transport infrastructure by 2030 indicates a US$9.1 billion investment opportunity for the private sector.

The opportunity in the water sector is smaller but still significant.

Kariuki adds, “With one of the fastest-growing economies in Sub-Saharan Africa, Kenya is a promising country for investment. The government is committed to the SDGs with several major infrastructure projects already underway. Opportunity2030 provides an important map of the SDG opportunities for private sector investors looking to invest with impact and improve the lives of millions of Kenyans over the next decade.”

Barrick Gold back to business with Tanzania