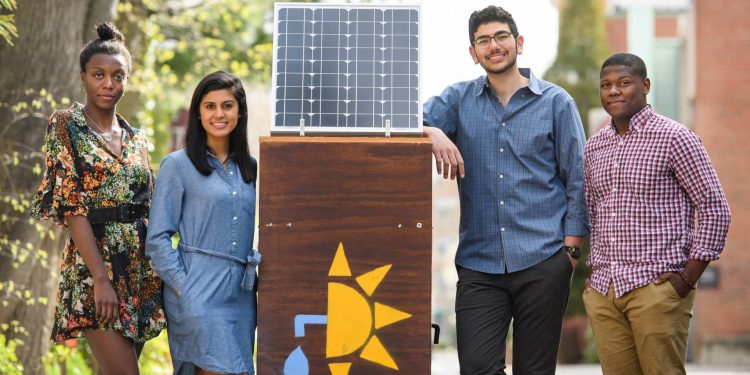 Four Princeton students entered the international Hult Prize competition with a device they built called WellPower, a solar-powered water purifier that also can be used as a power source in remote communities. Pictured from left to right are Victoria Scott, Ayushi Sinha, Noah Schochet and Todd Baldwin. Photo bySameer A. Khan/Fotobuddy

WellPower was started by four Princeton University students with the idea of providing reliable water access in Nakuru, Kenya

WellPower, an ambitious and savvy new tech startup, is now operating in all areas of Nakuru- 150  Kilometres north of Capital City of Nairobi- and is soon to expand to other parts of Kenya. They have launched an easy to use mobile app where users can now order clean, safe, and affordable drinking water on their phones and from the comfort of their homes.

Through the mobile application, which is available on Google Play Store, users are able to place an order for purified drinking water and select how much water they need between 10lts and 20lts. A WellPower delivery personnel then receives the order and delivers it at their doorstep within minutes.

WellPower launched the delivery service in August 2019 and already have more than 300 repeat customers in Nakuru. The company is founded by four Princeton University students who believe that access to clean, safe, and affordable drinking water should not be a luxury. It should be readily accessible and affordable to everyone. Back then, they were a team of 4 students working on this ambitious mission. The team has since grown to include a Kenyan based team on the ground.

The company uses repurposed battery packs from electric cars to power a water filtration system that generates clean water and electricity. The system can be fitted to any existing water source. The first system that the team installed pumps water from a river bank into an elevated tank. The water then runs through two filters, one designed to collect sediment and a second to gather viruses and bacteria. The clean water is held in a larger tank before distribution.

Water is just a starting point for WellPower

WellPower focuses on delivering a great customer experience for all its customers. They believe in the community and that great customer service makes them unique and different. Also do expect friendly and cheerful people to call you and handle your deliveries.

Eventually, the team wants to expand its operations to tackle agricultural processing or ice making, which are “productive uses” that lead to directly increased income for people in these regions.

More than half ofthe urban population live in such settlements where population growth reaches 10% per annum and more. The high density makes living conditions especially deplorable due to the sanitary conditions, creating a special condition of poverty. Sustainable access to safe water is estimated at around 60% in urban and 40% in rural settings.

Water commonly costs less per litre in urban middle-class neighborhoods – where there is piped water – than in informal settlements – where the majority rely on water vendors. For example, the price of piped water in Nairobi is in the range of 34-53 Kenyan Shillings (USD 0.34-0.53) per cubic metre (1000 litres), compared to 10-50 Kenyan Shillings for a 20-litre jerrycan in informal settlements.

Kenya's cessation of movement extended by a further 30 days