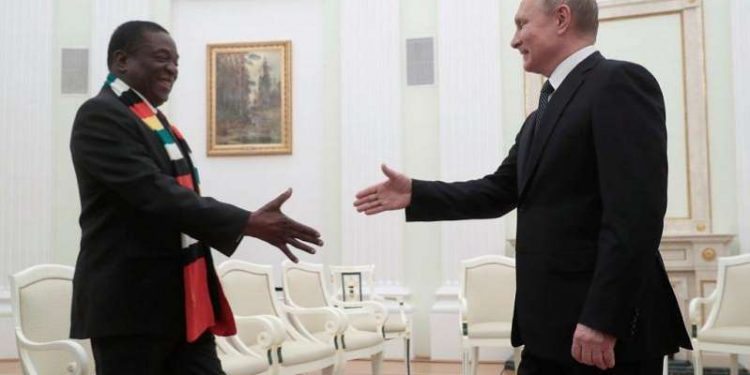 President Mnangagwa of Zimbabwe with President Vladimir Putin of Russia

President Vladimir Putin has held high-level discussions with Zimbabwe’s President Emmerson Mnangagwa on further development of Russian-Zimbabwean relations, as well as pressing international and regional issues in the Kremlin.

Mnangagwa arrived for a three-day official visit in Moscow. In the framework of the Zimbabwean president’s tour, Mnangagwa also visited Belarus, Azerbaijan, Kazakhstan before attending the World Economic Forum in Davos.

The visits to Russia, Kazakhstan, Azerbaijan and Belarus — on the other hand — embody the engagement and re-engagement thrust that has characterized President Mnangagwa’s foreign policy since November 2017.

Mnangagwa became Zimbabwe’s president in 2017. He replaced Robert Mugabe, who had ruled the country for 30 years. Mugabe together with South African Jacob Zuma last visited Moscow in 2015, when he took part in the celebrations of the 70th anniversary of Victory in the Second World War.

Over the years, Russia and Zimbabwe have maintained strong cordial relations, and the visit to the Kremlin mid-January, undoubtedly, opened a new chapter in the political relations and economic diplomacy for both parties.

Putin said at the talks with his Zimbabwean counterpart Emmerson Mnangagwa that Moscow would like cooperation between Russia and Zimbabwe to benefit the two countries and make a weighty contribution to the implementation of the development program of that African country.

“You won a convincing victory in the election fairly recently. The people of your country expect effective work. We are ready to do our utmost to make sure that cooperation between our countries benefits our countries, our peoples, that it makes a weighty contribution to the implementation of the plans and the program, which you have outlined for yourselves,” Putin said and noted that Zimbabwe was an important partner in Africa for Russia.

“There is a very long history of cooperation between Zimbabwe and your great country,” the leader of Zimbabwe said in return. He stated that Russia supported Zimbabwe during the struggle for independence and that Russia helped train the country’s military.

Referring to Putin as a senior brother, the Zimbabwean leader particularly looked up to the Russian leader for economic direction. “You, as a senior brother, you can hold my hand as I try to develop Zimbabwe. Zimbabwe has been suffering from sanctions imposed by the West for nearly twenty years,” Mnangagwa stressed with Putin.

Russia has remained Zimbabwe’s reliable partner in the days of isolation. The Zimbabwean delegation would like to put an emphasis on economic cooperation, Mnangagwa said, adding that the two countries have had longstanding relations in the area of political cooperation.

Russia and Zimbabwe signed a range of agreements for implementation of a joint project on development of the Darwendale platinum group metals deposit. Documents were signed in presence of Putin and Mnangagwa after their talks.

In particular, a license agreement on mineral resources mining on this field was signed. Further, a memorandum of understanding was signed between the African Export-Import Bank and the Russian-Zimbabwean Great Dyke Investments on provision of project financing by this bank in the amount up to $192 million.

Great Dyke Investments also signed a memorandum with the African Financial Corporation (AFC) on shareholding participation in the Darwendale project with an amount up to US$75 million. Another memorandum was signed to secure political risks of Russia’s VTB Group participation in the project. The Darwendale deposit is the second largest in the world. It comprises reserves of platinum, palladium, rhodium, gold, nickel and copper.

In September 2014, Foreign Minister Sergey Lavrov launched the US$3 billion project, the platinum mine located about 50 km northwest of Harare, the Zimbabwean capital. The Russian project, where production is projected to peak at 800 000 ounces year, involves a consortium consisting of the Rostekhnologii State Corporation, Vneshekonombank and the Vi Holding, in a joint venture with some private investors as well as the Zimbabwean government.

Alexandra Arkhangelskaya, a Senior Lecturer at the Moscow High School of Economics and Researcher at the Institute for African Studies told Buziness Africa’s interview that Russia and Africa needed each other – “Russia is a vast market not only for African minerals, but for various other goods and products produced by African countries.”

The signs for Russian-African relations are impressive – declarations of intentions have been made, important bilateral agreements signed – now it remains to be seen how these intentions and agreements will be implemented in practice, she added.

The revival of Russian-African relations should be enhanced in all fields, obstacles to broadening of current relations should vigorously be addressed, in particular the lack of knowledge in Russia about the situation in Africa and vice versa, suggested Arkhangelskaya.

Zimbabwe, a landlocked country in southern Africa, shares a 200-kilometre border on the south with South Africa, bounded on the southwest and west by Botswana, on the north by Zambia and on the northeast and east by Mozambique. Zimbabwe is a member of Southern African Development Community (SADC).

Reasons why Russian Brands still not in African Homes – The Exchange 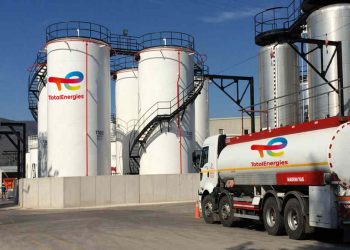