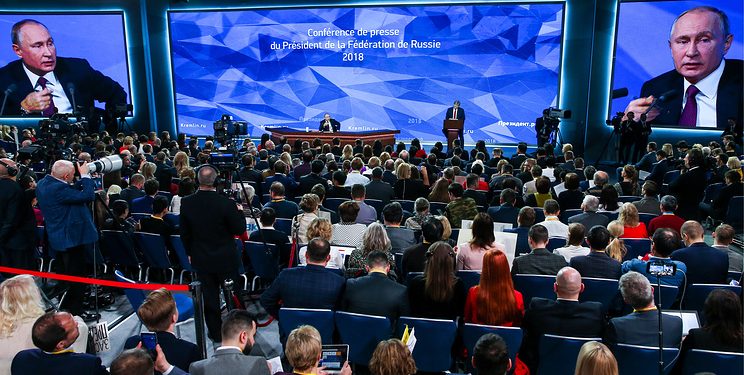 Since the establishment of the President’s Q&A press conference dubbed “The Direct Line” by the Kremlin administration, African media have been missing out. The simple reason is that the Russian Foreign Ministry has not granted accreditation to African media to work in the Russian Federation.

In practice, Russians have not encouraged and supported the idea of African media that could, in a way, present the positive changes and emerging economic opportunities in the Russian Federation to the general reading public, political elite and business community in Africa. Instead, they often talk about anti-Russian propaganda by western media in Africa.

In March 2018, the Deputy Director of the Information and Press Department, Artyom Kozhin, reassured in his media briefing that the Russian Federation would prioritise media, art and culture among several other programmes in efforts aimed at consolidating cooperation with African countries.

While the Foreign Ministry has accredited media from the United States, Europe and Asian countries, none came from Africa that comprises 54 states and most especially now when Russia is making efforts strengthening its relations with the continent.

Dmitry Peskov has noted the openness of the press conference of President Vladimir Putin when he said “Of course, there is no differentiation, and they cannot be. We are guided by the law on media that guarantees same access to the authorities, to all events for all accredited media. We do not impose any restrictions, and the president does not single out any particular countries.”

The fact that the Kremlin “considers it possible to create such comfortable conditions for work even for those media that cannot be described as objective” represents a reason for pride, the Kremlin spokesman noted, adding “Overall, 99.9% of journalists who requested accreditation, got it.”

“We traditionally ask our Foreign Ministry to assist in providing an easier access to entry visas for those foreign journalists who do not work here on a permanent basis,” Peskov explained. Among accredited journalists are representatives of Asia, the United Arab Emirates, the United States and Europe, the range is very wide, and there is, of course, great interest.”

President Vladimir Putin holds his annual year-end news conference for both Russian and foreign journalists to sum up each year’s results and plans in the subsequent years. This year was Putin’s first Q&A marathon during his new six-year presidential term and the 16th since 2001. Putin has answered the questions of the country’s citizens 11 times as the president and four times as the prime minister.

The shortest of these news conferences lasted for 1 hour and 35 minutes back in 2001, while the 2013 news conference set the record as being the longest one, lasting for 4 hours and 48 minutes. The first Q&A session with the Russian president was held on December 24, 2001.

Russia Prepares for Inter-Parliamentary Conference with Africa – The Exchange