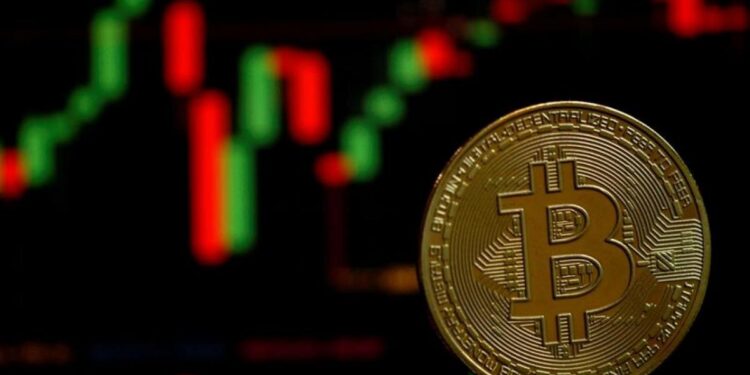 Bitcon falls by 29% as $2.5 billion of Crypto is liquidated. [Photo/Euronews]

The current sell-off could push bitcoin down another 8 per cent from the current prices to as low as US$38,000.

by Joseph Kangethe
in Africa, Business, Cryptocurrency
0
Share on FacebookShare on LinkedIn

The popularity of Cryptocurrency is on the rise in Africa but despite this, it is still plummeting.

According to the Cryptocurrency Adoption index from Finder.com, South Africa ranks 21st in countries with the most cryptocurrency users globally.

In the research carried out in December 2021 by Finder, 11 per cent of South African internet users, approximately 4.5 million people, claimed that they owned cryptocurrencies, a one per cent increase from October the same year.

Bitcoin tops as the most popular coin to possess with a 6.3 per cent ownership. Ethereum follows at 3.5 per cent and XRP at 1.5 per cent. South African cryptocurrency ownership ranks above the United States (10 per cent), Germany (8 per cent), and the UK (7 per cent).

The young population dominates Crypto ownership, with an average of 48.7 per cent being in the age bracket of 18 to 34.

The Crypto market in the world is looking ugly. The bitcoin price fell to a three-month low on January 10, accelerating the slide that started when the Federal Reserve ignited a broad sell-off worth US$300 billion. The bank cautioned that it might move more quickly than previously expected to reverse policy meant to reinforce the economy during the Coronavirus pandemic.

Experts predict that the latest crypto fall will persist for weeks in the Federal Reserve measures continue to be more aggressive.

On Monday morning, January 10, the value of the world’s cryptocurrencies stood at US$1.9 trillion, which was more than US$1 trillion below the all-time high of US$3 trillion in November.

According to crypto data website CoinGecko, bitcoin dropped by more than 5 per cent to US$39,692 by 9:45 A.M. ET. The drop totalled more than a 12 per cent loss since the Federal Reserve warned of its move to neutralize the pressure exerted by the pandemic as it aims to combat high levels of inflation.

Mike Novogratz, a crypto billionaire, told CNBC that the current sell-off could push bitcoin down another 8 per cent from the current prices to as low as USUS$38,000.

The tangential effect of Bitcoin repulsed as the ether, binance coin, and sol also went down as much as 5 per cent, resulting in about 20 per cent losses a piece over the first week of January.

Despite bitcoin’s current high levels of volatility, Zach Pandl, co-head of foreign exchange strategy for Goldman Sachs Research, says that the value of Bitcoin could hit USUS$100,000 in the next five years.

Over the last five years, the value of bitcoin has increased by nearly 4,300 per cent. Currently, however, the digital currency is down by roughly 40 per cent from the USUS$69,000 set in November 2021.

2021 is the year when bitcoin broke through its all-time high and pushed the industry closer to global mainstream adoption. It is arguably the year in which digital currency has experienced the highest degree of penetration into the African Market:

Kenya has ranked as the world’s leader in P2P trading volumes for the second consecutive year. The Central Bank of Kenya reported that mobile money jumped by 36 per cent to Sh6.2 trillion (USUS$550 million) in the nine months to November.

The crypto industry in the country is thriving. There has been a rising emergence of companies developing solutions based on blockchain. Kenya is positioned to become the leading crypto hub in East Africa by the end of 2022 due to its young population, high mobile connectivity levels, and familiarity with digital payment solutions.

However, a Luno consumer research survey shows that 64 per cent of Kenyans do not invest in cryptocurrencies because they lack enough information about them.

Cryptocurrencies could appear to be an alternative route to handle cross-border transactions.

Read: Tanzania going round in circles over cryptocurrency adoption

Most of Konza Technopolis’ phase one land taken up by investors

US$138 million needed for Horn of Africa drought-affected citizens