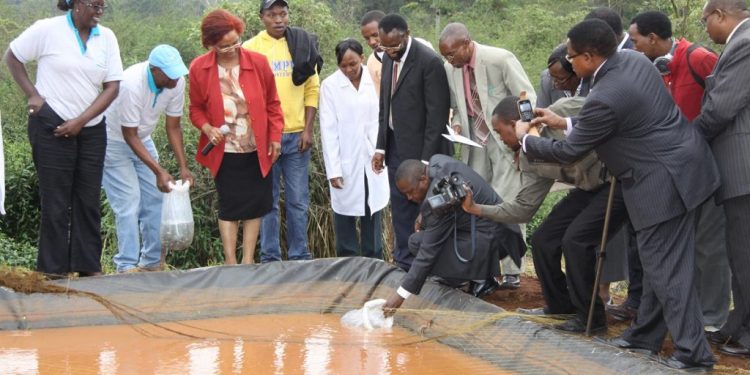 In Kenya, the Kisumu innovation technology hub LakeHub and Pinovate have created AquaRech and Liquid is using Internet of things (IoT) to help monitor water temperature and pH values in ponds to increase fish production.

Liquid Telecom has already connected ten pilot-phase sensors that will be sending information and feeding instructions to farmers through the Android and iOS app.

Kenya is ranked the fourth major producer of aquaculture in Africa, according to the Kenya Aquaculture Brief of 2017.

The brief adds that Kenya, however, has a far greater capacity for fish farming, with over 1.14 million hectares potentially available to enable a production capacity of over 11 million tonnes per year.

In a move that will complement these efforts, Liquid Telecom plans to equip 5,000 western Kenyan farmers with the sensors and app by the end of 2019.

There are some 20,000 fish farmers in western Kenya with an average of 2 fish ponds each and around 2,400 fish per pond.

Commercial fish farming is meant to produce fish to supply markets at competitive prices and still make a profit.

The market is, therefore, the driving force for commercial fish farming in Kenya.

Key parameters that determine the levels of production and success in fish farming are water quality, feed quality and seed quality.

The AquaRech programme will eventually be rolled out to 30,000 fish pond farmers countrywide. This is targeted at helping increase fish production, which fell by 17 per cent in 2017, according to the Kenya National Bureau of Statistics.

The Kenya Aquaculture Brief of 2017 says that aquaculture has grown rapidly in Kenya over the last one decade and plays an increasingly important role in national fish supply.

In Kenya, freshwater fish account for close to 98 per cent of Kenya’s reported aquaculture production.

Production from aquaculture systems recorded growth from 4,218 metric tonnes in 2006 to peak at 24,096 MT in 2014. This represents 15 per cent of total national fish production.

The rapid growth is mainly associated with the intervention of the government through the intersectoral Economic Stimulus Programme (ESP) in 2009, whereby Kshs 22 billion (USD 283 million) was channelled into key sectors from 2009 to 2012.

However, the freshwater aquaculture sub-sector registered a depressed performance for the second consecutive year, with total fish output dropping by 19.8 per cent from 18.7 tonnes in the year 2015 to 14,952 tonnes in 2016.

The programme by Liquid Telecom is meant to improve food security in the country.

“This is one of a series of partnerships we are developing to increase the country’s food security as part of the government’s big four agenda,” said Sajid Ahmad Khan, Chief Operations Officer, Liquid Telecom East Africa.

“Farmers have been closing down ponds and setting aside fish production as they struggle to feed fish correctly due to changing temperatures and conditions,” said Dave Okech, who initiated the AquaRech project and partnership.

The founder of a local fish farming group RioFish, Okech adds, “Our sensors transmit data to the cloud, where it is processed before sending specific instructions to farmers on the timing and quantity for feeding.”

Liquid Telecom Kenya is continuing to roll-out its Sigfox IoT network across Kenya which is being used for a range of IoT applications.

In December, the company partnered with Code for Africa (CfA) to install air quality sensors at 3,000 sites across Kenya, following warnings that air pollution is killing more than 20,000 Kenyans a year.

“AquaRech offers the hope of delivering thousands of tonnes a year in increased fish production, putting farmers back into a sector many have abandoned on the challenges of adapting feeds,” said Adil El-Youssefi, CEO of Liquid Telecom East Africa.

“This partnership is a great example of how our networks and innovative IoT solutions are helping to transform industries and businesses across Kenya,” El-Youssefi added.

Liquid Telecom has also rolled out a programme connecting Kenya’s biggest refugee camp to Gertrude’s Children Hospital for treatment over the internet.

You can also read how Liquid Telecom is preparing Africa for the Big Data revolution and the day Africa connected itself.