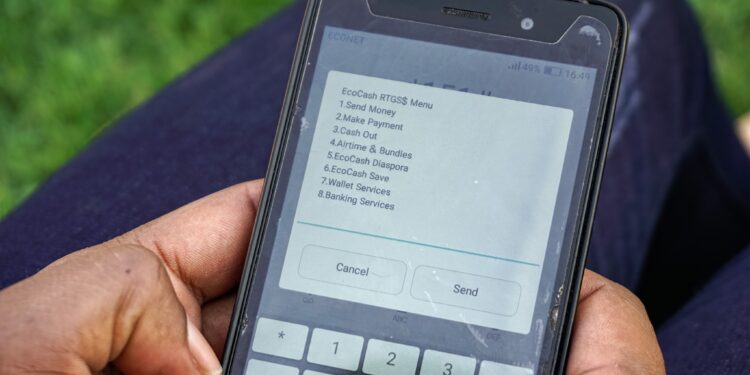 Zimbabweans have shifted en masse to mobile money usage. The system has become popular with 80 per cent of transactions in the country being conducted electronically. [Photo/Global Press Journal]

Thousands of Zimbabweans have been stranded outside banks and currency exchange offices across the country in a desperate attempt to get cash. This has been happening for weeks.

Mobile money usage in Zimbabwe has become popular with 80 per cent of transactions in the country being conducted electronically.

Reserve Bank of Zimbabwe governor has said that this has been linked to the acute shortage of cash in the country, which has forced the citizens to move to mobile money.

Thousands of Zimbabweans have been stranded outside banks and currency exchange offices across the country in a desperate attempt to get cash. This has been happening for weeks.

The shortage of cash is a legacy of the hyperinflation 13 years ago that caused the government at the time to abandon the Zimbabwean dollar. In 2018, the government printed 100 trillion banknotes, causing inflation to reach 500 billion per cent.

In a report published by the Global System for Mobile Communications Association (GSMA), a worldwide organization representing the interests of mobile money operators, Zimbabwe is ranked top among the 16 member states of the Southern African Development Community (SADC) in reference to mobile money penetration.

The GSMA, on the other hand, has stated that the intermediated money transfer tax (IMTT), also known as the 2% tax, is making mobile money transactions more expensive.

Finance and Economic Development Minister, Professor Mthuli Ncube, says that the government will revise the IMTT rate but it will not happen immediately as it is one of the major government revenue.

In his 2022 national budget reading, professor Ncube said that revenues from the IMTT were $28.9 billion as at September 2021, against a $22.7 billion target.

Mobile technology, particularly mobile money, became indispensable after 2020 came with unparalleled and historical changes in the local and global economies. It has played a crucial role in keeping people connected, delivering remote financial support, and offering a safe and no-contact way of paying for life essentials such as food and electricity.

Mobile money has become widely distributed in areas without banks, and this covers the majority of Africa.

As businesses worldwide felt the heavy slowdown in economic activity of the COVID-19 pandemic, the mobile money industry thrived, embracing the disruptions and building resilience as a ‘weapon’ against the spread of the virus.

GSMA Regulatory Index of 2021 indicates a significant drop in Zimbabwe’s index compared to 2020.

What is Regulatory Index

The Regulatory Index is a tool that evaluates and measures the degree to which regulations in a country create an enabling environment for sustainable mobile money services. The index is measured in six dimensions: authorisation, transaction limits, consumer protection, agent networks, and Investment and Infrastructure.

GSMA stated that the drop was primarily because of the reduction of transaction limits and the suspension of agent activities.

“Zimbabwe has the highest mobile money usage in the SADC region. A lot can be done to ensure there is sustainability and user resilience in Zimbabwe, “GSMA stated.

The Zimbabwe National Chamber of Commerce deplored that IMTT remained a hindrance to many businesses. They said that it added significant additional costs to numerous other tax obligations that they pay for.

Confederation of Zimbabwe Industries (CZI) economist, Victor Bhoroma, decried that IMTT was burdening the weight costs for businesses, forcing them to pay tax for every transaction made, including internal transactions.

According to the Reserve Bank of Zimbabwe, online and mobile money transactions registered a 7.32 per cent increase to $263.30 billion in October 2021 from $245.33 billion in the previous month.

Informal and retail traders in Zimbabwe have developed a preference for mobile money for their transactions. Does this indicate a failure in the banking sector in the country? Are mobile money transactions offering more convenient or cost-effective services as compared to banks?

In a broader perspective, mobile money transactions in Africa were $490 billion using mobile money providers alone in the year 2020.