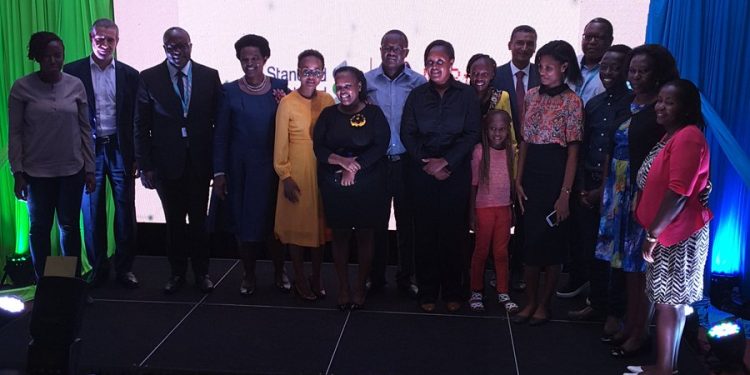 Winners of the #SCWomenInTech cohort 2- Source: SC -The Exchange

New tool to track women lending in the offing

The Women’s Financing Index, currently under development, will rate banks and financial institutions who apply for loans from the African Development Bank, against the amounts they have lent or are lending to women, Adesina said right before the start of panel discussions organized by the Initiative for Global Development (IGD) in New York.

by Kawira Mutisya
in Uncategorized
0
Share on FacebookShare on LinkedIn

A new tool to track the level of lending to women across the continent is in the offing.

According to the African Development Bank President Akinwumi Adesina, the new tool is important for ensuring women get the critical financial help they need.

Among the 63 economies surveyed in both this and the last report produced in 2015, GEM found that Total Entrepreneurial Activity (TEA) among women increased by 10 per cent, and the gender gap (ratio of women to men participating in entrepreneurship) narrowed by 5 per cent. These same economies show an 8 per cent increase in women’s ownership of established businesses.

The Women’s Financing Index, currently under development, will rate banks and financial institutions who apply for loans from the African Development Bank, against the amounts they have lent or are lending to women, Adesina said right before the start of panel discussions organized by the Initiative for Global Development (IGD) in New York. The theme of the event was “Empowering Women in Conflict Zones in Africa. “

The Bank, through its AFAWA, initiative – Affirmative Finance Action for Women in Africa –   aims to mobilise $3 billion to bridge the financing gap for women on the continent.

According to AfDB, despite being at the forefront of economic activity on the continent, women in Africa are disproportionately disadvantaged, particularly those in conflict-ridden areas, who are three times less likely to go to school, have less access to resources and justice, and are unable to obtain funding for businesses, farming and other commercial ventures.

In the first panel moderated by Ambassador Rama Yade, former French minister of state for human rights, Dr Hippolyte Fofack, chief economist of Afreximbank, said its vision to promote intra-African trade was directly tied to the theme of providing women with credit.

“Access to finance is at the root of development initiatives…that is why Afreximbank was created,” Fofack said, adding that Afreximbank’s top goals included supporting African women in agri-processsing to minimize post-harvesting losses, and acting as trade financing intermediaries. “We are committed to providing loans but we also grow with our clients,” he said.

According to World Bank, Africa is the only region in the world where more women than men choose to become entrepreneurs, a phenomenon that is not the subject of adequate discussion. Expanding the opportunities for female entrepreneurs through policies that foster gender equality would have a tremendous impact on Africa’s growth. Simple and inexpensive solutions have been proven effective and should be adopted on a wider scale.

The study also noted that the fact that women have less access to assets affects their ability to obtain medium-sized loans and, in turn, impacts the growth of their enterprises.

This problem can be counteracted in two ways: by giving women more control over assets through, for example, the granting of joint property rights (as is the case in Rwanda) or by eliminating the need for collateral. In Ethiopia, psychometric testing measuring honesty and willingness to repay loans offers a promising solution, as demonstrated by a World Bank initiative involving a partnership with one of the country’s financial institutions.

Also Read: Agriculture as a vehicle for increasing women’s participation in global trade

Tags: Investing in WomenWomen and powerWomen in business