by Chacha Mwita
in Uncategorized
0 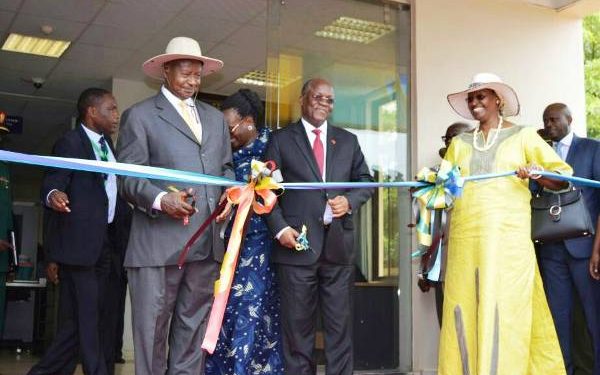 President Yoweri Museveni(L) with his Tanzanian counterpart John Magufuli during the launch of Mutukula OSBP in November last year.


JAN 3, 2019— Tanzania has granted Uganda free market access for its soya and sunflower exports, a boost to these products originating from the landlocked country.

The move follows a deal struck during a high-level meeting at the Mutukula One Stop Border Post (OSBP) which has cleared the key products to freely access the Tanzanian market.

This calms trade tension between the two countries after a recent caveat on a number of goods and products originating from Uganda led to an uproar by traders.

Tanzania had blocked certain Ugandan exports, including sugar, based on claims that it was repackaging imported sugar before re-exporting it to the neighbouring countries.

This contravenes the EAC rule of origin which gives preferential treatment to locally produced goods.

Findings by a joint verification taskforce however gave a clean bill of health to sunflower and soya for meeting trade rules on product origin under the EAC market protocol.

After talks between the two countries, led by their respective trade ministries, it was agreed that Ugandan traders be granted permits export the products to Tanzania.

Questions have however remained on palm edible oils from Uganda which have not been meeting the EAC rules.

President John Magufuli(Tanzania) and Uganda’s Yoweri Museveni have previously had close talks on boosting trade and investments between the two countries, tasking their respective teams to address existing barriers.

The latest developments place Uganda on track to continue building on its export bill which has been growing in recent times.

Last year, the landlocked country which mainly imports its products through Kenya’s Port of Mombasa and Tanzania ports cemented regional markets for its exports.

The value of Uganda’s formal exports to her neighbours grew to above US $1.1 billion, up from US$425 million in 2007.

For the first time, Uganda exported more items to Kenya than she imported with goods worth US$780 million finding market in Kenya, nearly doubling imports which stood at about US$400 million.

The country was able to overturn the tables mainly on consumer goods and personal care products which for long have been sourced from Kenya.

The trends have been credited on improved manufacturing sector, growth of the agricultural sector and political stability. The country has also been keen to improve the quality of locally produced goods.

The growing export market is something expected to continue this year in the wake of stable macro-economic conditions.

The government has made clear its intentions to harness trade with her neighbours through OSBPs. Four of the six OSBPs it has with its neighbor became operational  last year.

These are Malaba, Busia, Mirama Hills and Mutukula. This has translated into reduced turn-around time from three days in financial year 2015-16 to two hours in 2017-18.