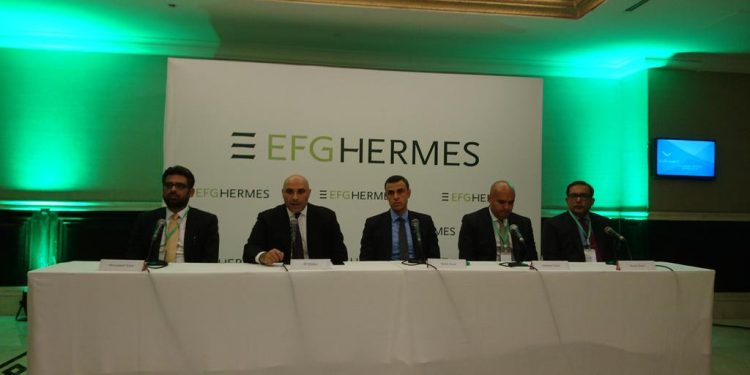 The Egyptian investment bank has been named top frontier markets brokerage firm in the 2019 Extel Survey for the second year running.

by Chacha Mwita
in Investing, World Economic Forum
0
Share on FacebookShare on LinkedIn

EFG Hermes, the leading financial services corporation in frontier emerging markets (FEM), has for the second year running been ranked the number one frontier market brokerage firm in the Extel Survey 2019.

Prior to this accolade, EFG Hermes was also named, for the second time in as many years, the leading Africa (Ex-South Africa) Equities House by the Financial Mail, attesting to the success of its expansion into African markets.

EFG Hermes launched its operations in Kenya in 2017 and has been using its Nairobi office as the hub for its East African research coverage and trading execution.

“As the most dynamic and leading economy in the region, we strongly believe that Kenya is the most appropriate hub for the region,” said Kato Mukuru, EFG Hermes’ Head of Frontier Research.

“Holding our ground in the Extel rankings is proof positive that we, as a firm and as a partner to our clients the world over, are committed to delivering the highest quality research in the industry,” said Ahmed Shams El Din, EFG Hermes’ Head of Research.

“The leading rankings attest to the capabilities of EFG Hermes Research as a true leader in the provision of frontier and emerging market research and its ability to provide key insights in some of the world’s most compelling markets,” El Din added.

The recognition comes three short years after the firm expanded into Frontier Markets, adding to its already deep, on-the-ground presence in Middle East and North Africa, wherein it covers some of the fastest-growing markets in Africa and Asia.

In 2018, the firm initiated on equities in Georgia, Bangladesh, Mauritius, Uganda, Rwanda, and Botswana, while deepening coverage within existing MENA and FEM markets and expanding its overall coverage universe to over 260 stocks.

READ:Africa’s Stock Exchanges are integrating, but why?

“This recognition by the world’s leading research survey reaffirms EFG Hermes’ commitment to producing innovative research, be it macro strategy or equity coverage, of the highest quality. As we have expanded into a number of new markets, the recognition of our analysts reaffirms our commitment to investing in the best calibre talent to provide clients with leading insight and investment solutions across our coverage footprint,” El Din added.

It’s sales team was also well represented in the Frontier survey with Sruti Patel and Muathi Kilonzo both placing in the top ten.

“Coming on the heels of our ranking as the top Africa (Ex-South Africa) Equities House at the Financial Mail Top Analyst Awards 2019, this industry recognition highlights the core strength of EFG Hermes Research and its ability to respond rapidly to the increasing demand for new investment ideas and strategies amid ever-changing markets,” said Ali Khalpey, CEO of EFG Hermes Frontier.

“Our strategy is to match our growing execution capabilities with world-class research that meets the needs of our clients. Beyond EFG Hermes’ strength as a research house in Africa, Asia and the MENA region, this is proof that our calculated investments into our frontier expansion have paid off and underscores our unmatched strength in the new geographies we have entered within the past three years.”

With a current footprint spanning twelve countries across four continents, EFG Hermes started in Egypt and has grown over 30 years of success to become a leading financial services corporation with access to emerging and frontier markets.

Drawing on its proven track-record and a team of more than 4,400 talented employees, it provides a wide spectrum of financial services that include investment banking, asset management, securities brokerage, research and private equity to the entire MENA region.

This falls in line with the Firm’s strategy to focus on two main pillars: product diversification and geographic expansion into non-MENA markets, which has seen the firm establish a physical presence in Pakistan, Kenya, Bangladesh, Nigeria, the United Kingdom and the United States.

Kenya's listed banks resilient as return on equity rises to 19.2%