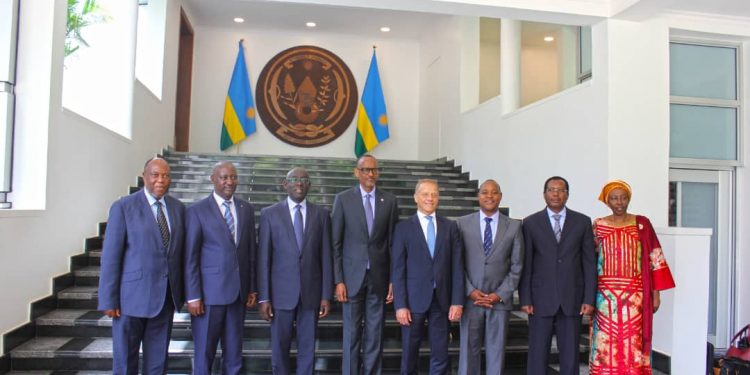 EABC Board Directors officially meeting HE Paul Kagame, President of the Republic of Rwanda

According to the chairman, the potential regional market of 200 million consumers can only be accessed if businesses are facilitated and NTBs eliminated.

by Kawira Mutisya
in Africa, East Africa
0
Share on FacebookShare on LinkedIn

Intra-East African Community (EAC) trade is still low at 12 per cent, compared to the European Uion which stands at 67 per cent.

This is according to the East African Business Council (EABC) Chairman Mr Nicholas Nesbitt who also commended Rwanda for being ranked 2nd in Africa in the World Bank’s ranking on Ease of Doing Business.

Such milestones if achieved in other Partners States will make the region more attractive for investments,” said Mr Nesbitt.

“The private sector desires to partner more with governments to make the region attractive for investments, wealth and employment creation, uplifting East Africans out of poverty,” he added.

The Chairman was speaking during an EABC Board Directors meeting with Rwanda’s President Paul Kagame, in Kigali, Rwanda.

According to the chairman, the potential regional market of 200 million consumers can only be accessed if businesses are facilitated and NTBs eliminated.

He further appreciated the president’s support for private sector becoming an integral player in driving the EAC regional integration agenda and called for other EAC Heads of State to move in tandem to push the integration agenda.

The meeting called for the establishment of a mechanism to implement the agreed Summit directives that have stalled.

The meeting observed the need to review the EAC Customs Management Act to better facilitate trade and address NTBs.

The role of public-private dialogues was also emphasized as a critical tool to address issues and restrictions to trading across borders.

Further, the meeting reiterated the urgent need to fast track the actualization of the AfCFTA and the full involvement of the private sector in AfCFTA negotiations.

Among other issues raised was the need to enforce resolutions made to liberalize EAC air space, implement the One Network Area, and quicken the issuance of work permits.

The meeting called upon the Summit to conclude the comprehensive review of the EAC CET.

President Paul Kagame and Chair of the Summit of EAC Heads of State recommended for close collaboration among the private sector in the EAC partner states to strengthen their voice to influence the policymakers.

The Chair of the Summit of EAC Heads of State recommended for a formalized mechanism through which the private sector will engage the EAC Council of Ministers.

The Chair of EABC also formally invited His Excellency in his capacity as the Chair of EAC Summit to drum support and invite other Heads of State to participate in a regional business summit organized by the EABC scheduled to precede the Heads of State Summit in November 2019.

HE Paul Kagame welcomed the request by the EABC to have a permanent seat during discussions of the EAC Heads of State in recognition of their partnership role in the EAC regional integration as enshrined in the Treaty.

Mr Kagame emphasized the importance of political will to drive the integration agenda and deliver benefits to the East African citizens and businesses.

The meeting appreciated the role of development partners, particularly TradeMark East Africa (TMEA) in promoting trade, increasing exports, reducing the cost of doing business and enhancing competitiveness. In addition, the role played by GIZ in their contribution and commitment towards their support to SMEs and EAC regional integration agenda was appreciated.

US, Kenya to build 50MW power plant in Kajiado