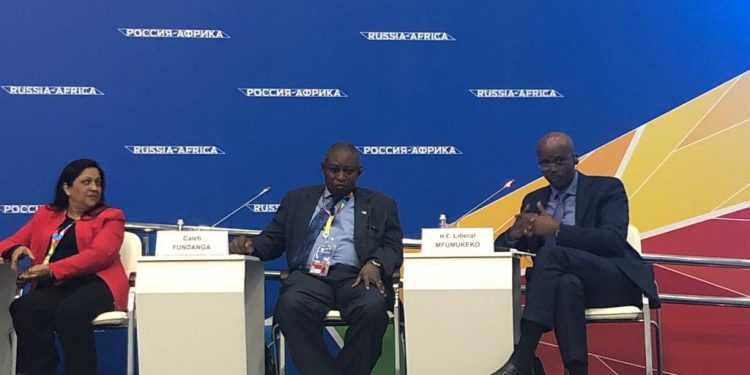 Is Russia eyeing a piece of EAC for investment?

Reports indicate that trade between has Russia and Africa by last year reached a total of $20 billion.

According to the Mr Mfumukeko, transport, logistics and technicians are some of the key areas that are open for investment in the region.

“One potential area where the EAC is deficient is the provision of critical services for business and investment in areas like transport, logistics and technicians. Both parties need to explore the existing gaps,” he said.

Mr Mfumukeko was speaking during the the inaugural Russia-Africa Economic Summit which is being held in Sochi, Russia from 23rd to 24th October, this year. The Secretary general highlighted the key potential areas of cooperation between Russia and EAC saying that there was need for both parties to examine the trading landscape between themselves and optimise what each party can produce for the others’ market.

“There is need to organise periodic bilateral traders/investors interactions through visits and trade and investment fairs,” said the SG, adding that the EAC Partner States and Russia should explore the possibility of removing travel restrictions such as travel visas to enhance the movement of persons between both parties.

Reports indicate that trade between has Russia and Africa by last year reached a total of $20 billion.

The Secretary General engaged the participants on the status of integration in the EAC. He informed the forum that EAC has a population of 168.2 million and a combined GDP of US$155.2 billion making it one of the Africa’s fastest growing regional blocs in Africa.

The SG said that the EAC economies were still virgin and quite endowed with massive natural resources, adding that Russian investors ought to come to the EAC and explore how to exploit this potential.

Some of these natural resources include oil discoveries in various parts of the bloc.

Data from the EAC secretariat shows that in Burundi, recent seismic and magnetic surveys have indicated that there may be oil under Lake Tanganyika and the Rusizi river plam.

In Rwanda, there is hydrocarbon potential existing in North Western Rwanda and deep under Lake Kivu.

In Tanzania, significant gas discoveries have been made on the coastal shores of Songo Songo Island and Mnazi Bay, and commercial exploitation for power generation began in July 2004. Petroleum seismic coverage in the public domain is approximately 52,000 kms, 52% offshore and 48% onshore, including the interior rift basins.

In Uganda, a number of mining companies have taken up licenses in the mining sector. Oil was finally discovered in Western Uganda in 2006 after 17 years of exploration. This discovery is set to boost the country’s economy significantly.

The EAC organises the East African Petroleum Conference after every two years. The last one was held in February 2015. Among resolutions made include the need to develop the Partner States’ petroleum potential by harmonising policies and legal and fiscal regimes pertaining to petroleum exploration.

During the summit, Amb. Mfumukeko said that there was need for the EAC Partner States to develop education and youth exchange programmes in addition to exploring the development of the respective languages of each party in the education curricula of the other party. The Forum is the first where the rich history of cooperation between Africa and Russia is being re-examined.

Among those attending the two-day Summit are government officials and members of the business community from both Russia and Africa. The delegates aim to substantively discuss the current status and prospects of cooperation and a wide range of topical issues of the World Economy.

Russia acknowledges the fact that today African countries are well on their way towards social, economic, scientific and technological development and are playing a significant role in international affairs. Russia further appreciates that African countries are strengthening mutually beneficial integration processes within the African Union which has eight (8) Regional Economic blocs among them the EAC.

The EAC Partner States’ led by their Heads of State also also participated in the Summit.

What next after Tanzania expands its aircraft fleet

How many billions can Tanzania fetch from ports?