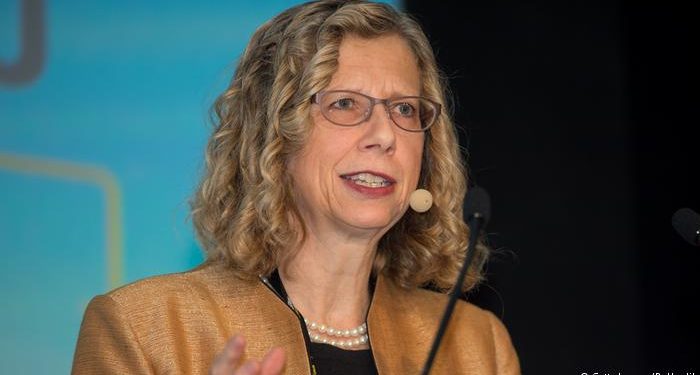 The new Executive Director of UNEP

by Kimani Chege
in Kenya, United Nations(UN)
0
Share on FacebookShare on LinkedIn

Key among Inger Andersen first assignment will be to oversee the upcoming United Nations Environment Assembly (UNEA) in Nairobi dubbed the One Planet Summit.

The UN General Assembly has elected the immediate former World Bank VP for middle East and North Africa Inger Andersen of Denmark to a four-year term as Executive Director of the United Nations Environment Programme (UNEP).

Throughout her 15-year career at the World Bank, her managerial roles focused on water, environment, and sustainable development with special emphasis on Africa and the Middle East. She further worked at the United Nations for 15 years, starting in the United Nations Sudano-Sahelian Office (UNSO) working on drought and desertification issues, and was then appointed United Nations Development Programme (UNDP) Global Environment Facility Coordinator for the Arab Region.

Deputy Executive Director of UNEP, Joyce Msuya of Tanzania, has been serving as Acting Executive Director, after she succeeds Erik Solheim, who resigned in November last year. Solheim’s resignation followed audit queries on his huge travel expenses amounting to Sh50 million. The money is believed to have been splurged on travel and hotel accommodation.

Key among her first assignment will be to oversee the upcoming United Nations Environment Assembly (UNEA) in Nairobi dubbed the One Planet Summit.

The French President Emanuel Macron is also set to co-host the fourth session of the United Nations Environment Assembly when he makes his maiden trip to Kenya next month. The forum to be held at UNEP headquarters in Nairobi will explore ways to accelerate sustainable use of natural resources through innovative policies, financing and technological solutions.

The forum will build on consensus and commitments made at the Sustainable Blue Economy Conference held in Nairobi last November.

Will Industrial Water Policy avert war in Kenya and Africa?